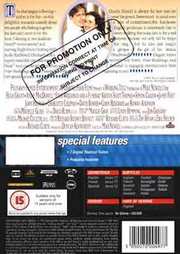 Back Cover of Four Weddings and a Funeral
Related Items

Four Weddings and a Funeral (UK) 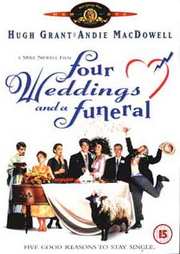 Synopsis:
The champagne is flowing – and so is the fun – in this delightful romantic comedy about two people who belong together but just can’t seem to tie the knot. Ushering in two Academy Award nominations, and starring Hugh Grant (Notting Hill), Andie MacDowell (Michael) and a superb ensemble cast that includes Oscar-nominee Kristin Scott Thomas, Four weddings And A Funeral is truly "a very special occasion" - Rolling Stone.

Charlie (Grant) is always the best man but never the groom. Determined to avoid even a hint of commitment, this handsome English gentleman is notoriously late to every wedding. But today he’s in for a surprise because not only did he forget the ring... but he also just caught a glimpse of the girl of his dreams (MacDowell)!

Elegant, festive and very, very funny, Four Weddings And A Funeral is engaging entertainment from beginning to end.

Introduction
Damm this is a good film. I mean, I expect you`ve watched it some time ago and thought that was good.
Watch it again, soon, its worth rediscovering. There are so many good moments. I usually get around to rewatching it every year or so. Every time I think how good it is, mostly because of all the little details you`ve forgotten about.

The Plot
A group for friends who usually run into each other as mutual friends get married, or die. We follow their lives in brief intense periods when they`re dressed in their best clothes and trying to observe decorum.
I can`t imagine how anyone could come up with a script based on this idea, but thankfully Mr Curtis thought he could.

There are just some many amusing situations in this film. These are the parts I keep coming back to watch it for. Sure its slushy and romantic in parts, the the jokes never dry up.
Quote:

Charles: Ehm, look. Sorry, sorry. I just, ehm, well, this is a very stupid question and... , particularly in view of our recent shopping excursion, but I just wondered, by any chance, ehm, eh, I mean obviously not because I guess I`ve only slept with 9 people, but-but I-I just wondered... ehh. I really feel, ehh, in short, to recap it slightly in a clearer version, eh, the words of David Cassidy in fact, eh, while he was still with the Partridge family, eh, "I think I love you," and eh, I-I just wondered by any chance you wouldn`t like to... Eh... Eh... No, no, no of course not... I`m an idiot, he`s not... Excellent, excellent, fantastic, eh, I was gonna say lovely to see you, sorry to disturb... Better get on...
Carrie: That was very romantic.
Charles: Well, I thought it over a lot, you know, I wanted to get it just right.


Rowan Atkinson plays a small comedy part as a nervous vicar, and he could have stolen the show. Luckily his part fits in well with the overall play, after all its not his vehicle.

The One liners aren`t really one-liners at all. They tend to be short exchanges that pack a remarkable comedy punch when set against the overall backdrop.
Quote:

Gareth to an american lady:
Do I know Oscar Wilde? No, but I know someone who can get his fax number for you.


The Cast
Hugh Grant - I guess this film defined him. It works though
Andie MacDowell - apparently came into the project 2 weeks before filming started. I`m not sure she would have been my choice, but shes not bad.
John Hannah - plays the part well, but gives one of the most moving eulogies I`ve come across yet.
Simon Callow - the perfect brash Scot!
James Fleet - just pre-Vicar-of-Dibley but much the same sort of part. Probably no coincidence.
All the others are very good to.

The Visuals/Audio
The visuals are fine, nothing bad I noticed.
Audio is Dolby 2.0 - its adequate.

The Extras
Pretty thin for extras, a trailer or two, and a featurette which for the life of me I can`t recall.
So - nothing great there.

Summary
You must have seen this over the years sometime. Do yourself a favour and watch it again.
posted by Julian Onions on 26/2/2004 13:12