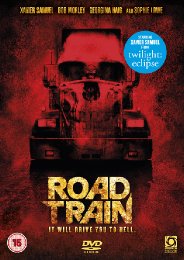 DVD
The Loved Ones

It's not entirely uncommon for a country's horror output to seemingly do its best to put off any prospective tourists but the recent horror films emanating from Australia (and even dating back to the very beginning of the Australian New Wave and Long Weekend in 1978 show Australia as a vast country that is not to be messed with. More recent films have introduced themes of cannibalism (Dying Breed), out-of-control nature (Long Weekend, Rogue, Black Water) or psychopaths in the outback (Wolf Creek). Because the country is so vast and the railway system doesn't always allow you to go exactly where you want to, people often turn to the highways which, because the outback is so enormous, are straight roads which seemingly go all the way to the horizon. Not only do tourists, both domestic and foreign, take to the roads, but commercial transit will also use lorries instead of trains to transport goods across the country -- these enormous vehicles are apparently known as road trains.

Road Train, which is more widely known as Road Kill, begins with a group of four friends, separated into couples, camping out and enjoying each other's company including athletic sex in a tent. The next day, they hit the road in order to travel on to their destination when a huge road train appears in the rear view mirror. Wanting the lorry to pass them as the sheer experience on a vehicle that size overtaking you on the road is apparently quite an experience, they wait for the lorry to approach them and then pull out to pass. After overtaking the Jeep, Craig decides to overtake the lorry and one of the girls yells at him for his brother reckless driving, having driven up to the back of the car. The road train's responses to slam into the back of the Jeep before ramming it off the road and causing one of the group, Craig, to suffer a compound fracture of his forearm. The others realised that, without medical attention and fluids, Craig will die and things look particularly grim when they see the truck parked up ahead of them on the road. 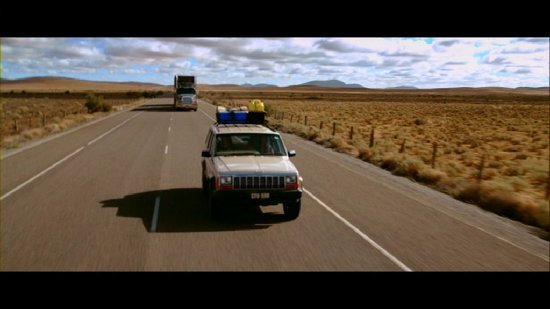 With little in the way of alternatives, they leave Craig in the Jeep's backseat and decide to investigate the truck. When the two girls get to the wagon, they find that the driver has disappeared, leaving the cabin door open and the keys in the ignition whilst Marcus encounters the gun toting driver who has seemingly killed his co-driver and is chasing them, firing off rounds as he goes. With the hulking vehicle to themselves they decide to commandeer it and it mysteriously starts with Marcus, who has only ever had experience of driving regular vehicles, doing extremely well to operate this massive vehicle with two containers attached to the back. Whilst they are driving along, the radio comes on by itself and a country song plays which seems to cause all 4 to drift off into a peaceful sleep.

Waking up with the truck amazingly having driven off the road and up onto the top of a small dirt track, Craig has absolutely no idea how he managed to drive to that location and isn't even aware that he has been asleep. As it is impossible to reverse down the thin and precarious road, they must try and find help from alternative methods and one of the girls thought she saw a shack a few miles back, something which Craig hotly disputes, so she heads off in search of help whilst Craig goes off to try and flag down a vehicle and Craig's girlfriend, Liz, stays with him. 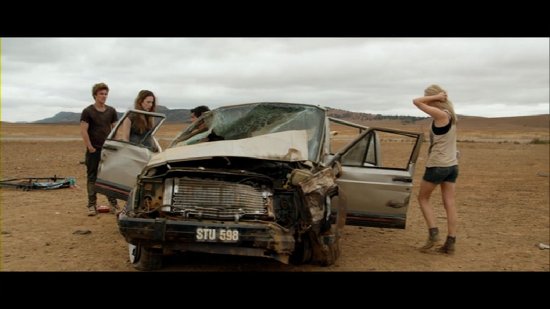 What happens from here is mysterious and nightmarish as a perfunctory investigation reveals that not only are the fuel tanks empty, they have never contained diesel and the engine itself is virtually non-existent. The question is: how does the vehicle operate and, furthermore, how did they end up in the desolate location when everyone in the cabin, including the driver, was fast asleep.

From the very beginning of Road Train, I was reminded of Duel, Steven Spielberg's made-for-TV debut feature (which I still consider to be his best film) and, when the driver begins to terrorise the four friends, shooting at them, I thought we were heading into The Hitcher territory. However, when the truck ends up under their control and the driver is fairly quickly dispatched with, I realise that this was a very different film altogether. 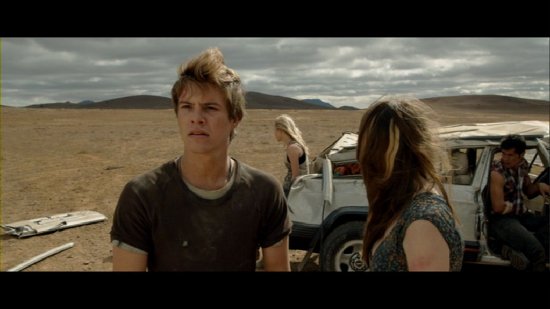 Although the film is based on extremely interesting and promising conceit, it really doesn't help that the four main characters fail to engage on any level and their bickering quite quickly begins to grate so much so that you aren't really that bothered if anything nasty or otherwise unfortunate should befall the group. Another problem I found was the pacing which really should be moving along at a hell of a rate but felt sluggish and there were periods when I was just waiting for something, anything, to happen.

I'm not sure exactly what direction Dean Francis gave the four young actors and whether they were supposed to be as irritating, obnoxious and generally unlikeable as they were but it really doesn't help when you're not emotionally engaged with the central character(s). Although my attention occasionally wandered, I followed the film happily enough and thought that each development was a decent turn of events but it was a shame that the film moved into science fiction territory and away from the psychological thriller/horror that it began as.

Extra Features
This is a film that would have benefited from a commentary or extensive interview with writer Chris Hopkins or director Dean Francis but all that the disc contains, aside from the theatrical trailer on the main menu, is Making Of Road Train which doesn't really go into much detail about how certain stunts were done, where it was filmed (other than South Australia) and how the four actors came to be cast. It therefore largely consists of EPK style interviews with the actors and Dean Francis and a series of deleted scenes that can be viewed individually or together using the 'Play All' function. 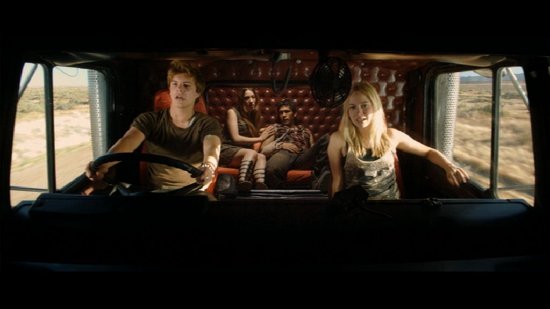 The Picture
The anamorphic 2.35:1 picture is extremely pleasing with wide shots of the Australian outback picture show you how remote the location is and how unlikely it would be for anyone to tech a lift. When it comes to interior shots, colours are strong and vibrant and skin tones are reassuringly realistic.

The SFX make-up department really did their work well when it came to designing and fitting that the prosthetic broken arm on Bob Morley, who plays Craig and it's one of those that is so well made it makes you wince. 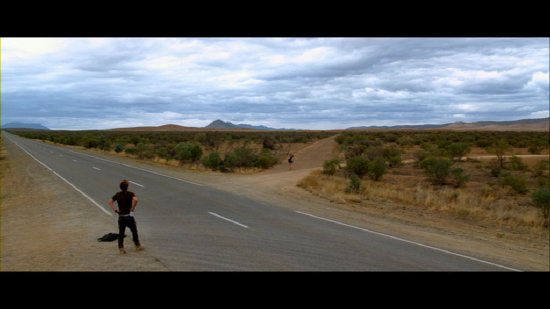 The Sound
I was surprised that there wasn't a Dolby Digital 5.1 option but the DD 2.0 stereo track does its job effectively with the dialogue coming across clearly and the music, by Rafael May, is decent enough and not exactly intrusive or overpowering. On the few occasions when the scenes are tense, the score contributes to the escalating stress of the situation but isn't going to tear up any trees or mark May down as the new Bernard Herrmann. 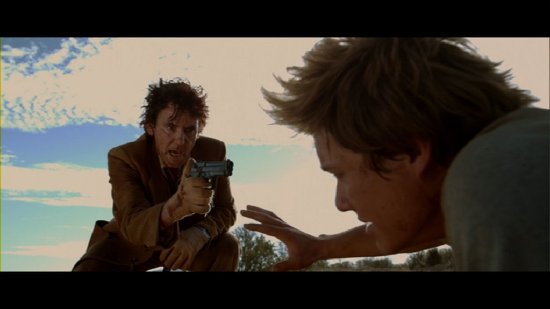 Final Thoughts
Road Train or Road Kill, call it what you will (hey, that rhymes), isn't the finest genre film from Australia in recent years and Dean Francis certainly isn't the new Greg McLean or Peter Weir. This is passable fare, nothing more and really doesn't compete with the likes of Wolf Creek, Black Water or even The Long Weekend remake when it comes to the recent spate of great horror films emanating from Australia. Not helping matters is the disc which really should come with more supplementary material than the brief making of, a trailer and selection of deleted scenes although, saying that, the AV package is impressive enough.

This is perhaps worth a rental if you're curious but, otherwise, there are better films worthy of your time and money.