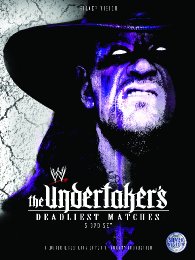 DVD
WWE Randy Orton: The Evolution Of A Predator

Introduction:
For those who weren't a fan of WWF "gimmick" wrestlers, the character of The Undertaker was another stick with which to beat the company. The character rarely (though deliberately) showing any facial expressions - one of the most important aspects of being a wrestler - his matches were often too slow and lumbering, despite the fact that the man himself (real name Mark Calaway) was clearly a tremendous athlete for someone who stood a legitimate 6ft 7in tall, and likely weighed 270+ lbs.

That style continued whether The Undertaker was a heel or a babyface, and only changed in 1996 - six years after his debut - when he was allowed to open up his repertoire in his feud with Mankind (Mick Foley). Though the two are best remembered for the frightening Hell in a Cell match in 1998, their bouts in 1996 showed that 'Taker could wrestle when allowed to, which he subsequently was in 1997 bouts with Bret Hart and Shawn Michaels.

Since then, The Undertaker's stock has remained high, even if the quality of his matches have had their ups and downs. In this three-disc DVD set, we get a look at the various stages of his WWE work, with some of the post-1996 good, and some of the pre-1996 bad.

Video & Audio:
Video is presented in 4:3 fullscreen PAL and is very good for a DVD of this genre. 4:3 is the frame of choice because some of the earlier matches, dating back to 1991, pre-date widescreen. As always, the older footage is fantastically well-kept.

Audio is presented in Dolby Digital 2.0, and is also very good. There's few bells and whistles, so to speak, but everything is clearly audible throughout, which is just about as much as you need from a sports-style DVD.

Main feature:
When I mentioned the good and the bad, I wasn't kidding.

There's a certain nostalgia for fans of my age for matches like the one versus The Ultimate Warrior, or even Kamala, from 1991 and 1992 respectively. But when the bouts are watched with an untainted eye, they involved almost zero wrestling, and "The Phenom" himself looks like he's barely breaking a sweat.

Even nostalgia can't save bouts with the likes of King Mabel/Big Daddy V (two characters played by the same wrestler), Kane, Big Show, Heidenreich, and The Great Khali. But fortunately, there are also entertaining bouts here with (remarkably) Kama, Mankind, "Stone Cold" Steve Austin, Randy Orton, Batista, and Edge, with the bout with Edge perhaps being the pick of that bunch.

The set suffers from the ironically fan-friendly decision by WWE DVD not to include matches from other releases. Therefore, whereas the Bret Hart DVD set featured two matches with The Undertaker, this release features no matches with Hart, even though either their contest from Summerslam 1997 or the subsequent One Night Only bout would have been easily the best match on this release.

But even with that in mind, there are some baffling match choices on this set. The aforementioned feuds with King Mabel, Kane, Big Show, Heidenreich, and The Great Khali were all disastrous when it came to in-ring wrestling, and there are numerous bouts that could have been used in their place.

Overall:
All in all, this is a frustrating set for the viewer, with too much of the bad getting in the way of the good. Though it also has its limitations, the WWE release "Tombstone: The History of The Undertaker" is a much better collection of bouts, that will leave you feeling like you got more for your money.