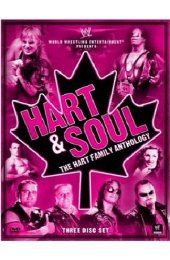 The Hart family has long served as Canada's first family of Sports Entertainment, from patriarch Stu and his Stampede Wrestling and Dungeon, a training site that has produced multiple Hall of Famers, though sons Bret, Owen, on to a new generation of WWE Superstars, The Hart Dynasty. But the family's journey was never a smooth one, as their accomplishments were often punctuated with devastating tragedies and loss. Now for the first time ever, fans can learn the entire story in Hart & Soul: The Hart Family Anthology. A brand new documentary chronicling more than 5 decades of family lineage is filled with never-before-seen Hart family interviews and supplemented with a dozen matches featuring Bret, Owen, Keith, Bruce, The British Bulldog, The Dynamite Kid, Jim "The Anvil" Neidhart, The Hart Dynasty, and more!

Introduction with The Hart Dynasty

The Hart Family in a WWE Ring

Ripped Apart at the Seams

The Hart Family Settles It in the Ring

The Best is Yet to Come