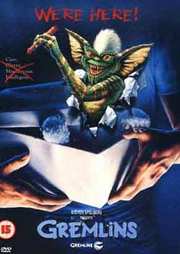 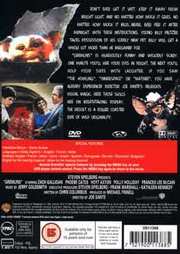 Back Cover of Gremlins
Related Items

DVD
Bonfire Of The Vanities (UK)

Steven Spielberg used to be good, you know. I`ve discovered this recently. The man is a directing legend, that is true, but his recent output has left something to be desired and I can`t trust anyone who tampers with films to the extent that guns are replaced with walkie talkies. I thought George Lucas was bad with tampering with films, but that takes the mick. So I`ve watched Jaws and this film in the last few days and there`s a documentary on the Jaws DVD where Spielberg admits he wouldn`t make a film like this these days. He was young and ambitious, he says, took risks. So now he just plays safe, and the world is the poorer for it as his earlier films all have a mark of genius about them, even when he isn`t directly behind the camera. For Gremlins, Spielberg takes the role of Exec. Producer and leaves the work to Joe Dante, but this is a masterpiece of dark comedy. Oddly I also discovered that Gremlins was written by Chris Columbus, a man who would later end up directing and producing Harry Potter…

Set in the sleepy picture postcard town of Kingston Falls, failed inventor Randall Peltzer (Hoyt Axton) manages to finagle a cute creature called a Mogwai from an old Chinese bloke in a dusty old shop whilst travelling back home from some failed business trip. He gives the creature (Gizmo) to son Billy (Zach Gilligan) with three simple rules told to him by old Chinese dude:

1. No bright lights
2. No water
3. No feeding after midnight

Clearly all three rules were made to be broken by those who fail to understand old Chinese magical things, and so one Mogwai called Gizmo soon ends up with five companions. These companions are moody buggers though, hanging out in a gang and led by the one with the white mohican and inevitably called Stripe. After gorging on chicken late one night, the Mogwai gang go into metamorphosis in cocoons and emerge as slimy green Gremlins, creatures with mayhem and murder in mind.

Soon the sleepy town of Kingston Falls falls prey to these mischievous creatures, all sorts of inventive `accidents` befalling the inhabitants. It`s down to Billy and his girlfriend Kate (Phoebe Cates) to save the day along with Gizmo.

Anamorphic 1.85:1 picture that doesn`t show too much wear and tear, although it`s a little grainy in places. Some of the animatronics are still very impressive, some shots work better than others though.

Also contains some nice audio and visual references, one of the most memorable for me being the faux Mickey Mouse head when the Gremlins are in the cinema watching Snow White.

A nice 5.1 mix that booms in the right places, generally whilst mayhem is taking place. 5.1 soundtracks also available in French and Italian. Nicely subtitled as well with a nice selection of foreign languages to choose from.

Not a sausage (it`s after midnight, you know…).

I remember watching Gremlins in the cinema when I was 16 and laughing virtually non-stop at the sheer outrageousness of it all. Watching this film 22 years after that, I can see the references that I was too young to understand at the time, but still laughed at the same things I laughed at before. Dante and Spielberg have created a dark comic masterpiece, very dark in places as people do die, but in hilariously funny ways. It could have been much much darker, but both wanted the film to be family oriented and this despite people walking out of cinema`s with young kids in disgust at the final result.

It`s true that the pacing is somewhat askew, certain portions of the film slow the plot progression down to a crawl simply to allow a succession of animatronic set pieces, but they are magnificent and I can`t think of one that I`d prefer to have removed to make the pace a little faster. Whether it`s the drunken Gremlins in the bar either drinking/fighting or mocking Flashdance and body poppin` or the awe of the creatures singing along to Snow White in the cinema, there`s not a frame involving the Gremlins that feels wasted.

One particular controversy was the inclusion of Phoebe Cates speech about her father dying on Christmas Eve after falling down the chimney. This speech feels a little forced in that all it does is explain why her character doesn`t like Christmas. It`s a little dark and to be honest completely unnecessary as there is no real plot reason for her character to declare a dislike for the festive season.

Still, enough of the morbid nonsense. We watch this film to have some fun and watch as inventive ways to dispatch people and creatures unfold before our eyes. One scene I`ll never forget is the classic Stannah stairlift gag with crotchety old Mrs Deagle, but then that`s rivalled by the Gremlins who are despatched in both the blender and the microwave. A little gruesome, but wholly entertaining and a film with a Christmas feel to it as well. Nice…