Blu-ray
The Hands of Orlac
Tags For This Item
DVD, Shawn Michaels, Wrestling, WWE
About This Item 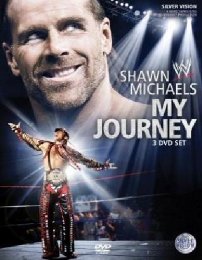 Synopsis:
Shawn Michaels is one of the most charismatic and talented athletes in the history of entertainment. For more than 20 years he has wowed crowds, earning accolades, championships and numerous monikers, including "The Icon," "The Main Event," and "Mr. WrestleMania." Now, for the first time ever, Shawn Michaels sits down and in an intimate interview retraces his early days in Texas through his Rocker tag-team partnership in AWA and WWE through his multiple reigns as WWE Champion. Shawn Michaels: My Journey offers surprising insights and absolute candor as he relives the highs and lows of his historic career. Over 20 amazing matches from the 80s, 90s and 2000s -most available on DVD for the very first time - demonstrate why Shawn Michaels is truly "The Showstopper."

Always Having Fun with Davey

This Is Going To Be Art

Tribute to the Troops