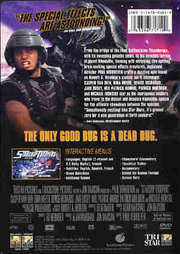 Back Cover of Starship Troopers 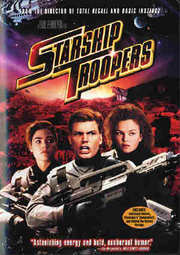 Synopsis:
Earth is at war with the bug ridden planet of Klendathu. Filled with an almost infinite supply of terrifyingly armoured spider like bugs, unknown intelligence on the planet is sending them our way via meteors. This follows the story of four good friends who all join up to serve the army and gain citizenship, and struggle against impossible odds to survive.

Starship Troopers is a fair movie, and a great disc.
For an action flick it`s alive with vibrant colours, fantastic special effects and the usual over the top violence you come to expect from Paul Verhoven. The thing is we`ve seen a lot of it before, and the action can get a little tedious after too many watches, but saying that it`s a great action movie which, if that`s what you`re into, you`ll enjoy loads.
To be honest I didn`t think the picture was all that great, you could tell they`d had to lower the bit rate to get it all on one side, but of course it`s still far ahead of VHS. The sound on the other hand is fantastic with the full 5.1 channels getting a thorough working over.
The disc is also packed with extra features, all though unfortunately their not all that special - Paul Verhoven in his commentary often just says stuff like, "well that`s a composite shot, that`s real, composite, real ... blah, blah" like you couldn`t tell yourself, but you get some insights at least, and in some areas it can be real funny. The deleted scenes are OK - but why so much kissing???.
Overall it`s a great disc, and a pretty good movie - but 10/10 is way too much.
posted by Neil Beatson on 27/1/2000 16:15
8 / 10

Starship Troopers is a great action flick. It doesn`t pretend to be anything more than eye candy, and I admire that honesty. It`s a great popcorn movie, with FANTASTIC special effects, very much in the vein of Lost In Space. If you just remember to leave your brain at the door on the way in you`ll really enjoy this film!

The story is fairly simplistic (unlike the book on which the film is based), and concerns a group of teenagers who have just graduated from school and are wondering what to do with their lives. Johnny Rico (Casper Van Dein), the school`s all-star athlete is dating the most gorgeous girl in school, Carmen Ibanez (Denise Richards). Unfortunately, Carmen has aspirations of joining the the Federation`s mighty Starfleet as a pilot, something Johnny just doesn`t have the brains for. In an attempt to impress Carmen, Johnny signs up for the Mobile Infantry, the cannon fodder of the Federation`s armed forces. Soon after signing up, war breaks out with a planet of giant alien insects, called the Arachnids. These bugs send a meteor to Earth, which completely wipes out Rico`s home city of Buenos Aires. Fuelled by revenge, Johnny and the rest of his unit are sent to Klendathu, the Arachnid`s home world, to kick some serious bug butt. Unfortunately for them, that`s when their troubles really start...

This disc is a real beauty, especially when compared to the appalling UK region 2 release. The disc is dual-sided, but thankfully the film is contained on one side of the disc (the UK disc is a dreaded "flipper"). The other side of the disc houses most of the special features, which include a theatrical trailer, some deleted scenes and a documentary. Also on the disc are some of the actors screen tests, which is a novel inclusion.

Video wise this disc is great. The 1.85:1 anamorphic transfer is really good, especially considering that this DVD has been around for some time now. It puts some newer releases to shame. The DVD format shows up the astounding Arachnid effects brilliantly, everything is very clear indeed. There are no visible artifacts and colour reproduction is spot on.

Sound comes in either Dolby Digital 2.0 or 5.1 formats, the latter being the best choice (obviously). The sound mix is great, bugs scamper all around and screeches emanate from every speaker. The center dialogue channel is also very clear above the noise of war. There is a commentary track featuring Ed Neumeier and Paul Verhoeven, a man who`s commentary`s are always VERY enthusiastic to say the least.

As I said before, this is a very enjoyable, no-brainer action film. Buy it, turn off the lights, crank up the volume and get totally carried away by the the special effects. You will believe those bugs are real!
posted by Chris Gould on 22/9/2000 01:28