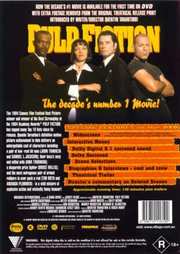 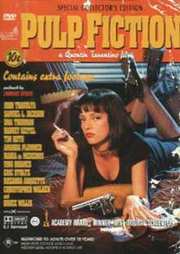 One of those endlessly quotable films, Pulp Fiction is a classic and no mistake. Good performances from the cast, and a great script full of the aforementioned snappy dialogue make this a fantastic film. It`s been poorly represented on DVD in the pat, but this disc goes some way towards making up for that.

The video is anamorphic, which is a major advantage over the previous releases. It`s not totally perfect, few discs are, but it is the best looking version of Pulp Fiction you`re going to see. Colour balance is good, blacks are black, whites are white, and claret is everywhere!

Audio is also good, with the awesome soundtrack sounding better than ever. Dialogue is very clear, as are the effects, and there is some nice use of the surrounds.

Extras, while not being as comprehensive as other discs, are better than the previous releases. On offer are the trailer, a featurette, interviews, a Pulp Trivia page, some trailers for True Romance and Jackie Brown, and some deleted scenes. These are interesting and are preceded by a short introduction from Tarantino. It would have been nice to have a commentary track, but hey, you can`t have everything.

Overall then, this is a good disc and an even better film. I was actually surprised how well the film has stood up over the years; it doesn`t quite evoke the same feelings it did when I first saw it (maybe I`m used to better dialogue now), but it is still a classic film. It is also worth noting that this version appears to be uncut, and that includes the needle insertion scene that was reframed for the UK release. Well worth £14 of anyone’s money.
posted by Chris Gould on 22/2/2001 08:36
8 / 10