DVD
Siege of the Dead

Article
[Rec]2 out on DVD and Blu-ray in September 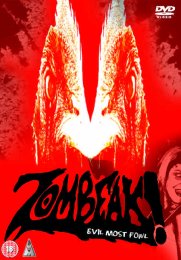 Synopsis:
On the darkest night of the year, the one night on the calendar when the forces of evil dominate the earth and are free to walk amongst us, a motley crew of bumbling Satanists - flamboyant and egocentric leader Leviathan, committed high priestess Vascara, timid Goth boy Gideon and brawny psychopath Samuel - kidnaps sassy blonde Cooters (think Hooters but slightly less classy!) waitress Melissa. Their intention is to offer her up as the Devil's earthly bride and become the mortal mother of the antichrist. But Melissa's mechanic boyfriend, Bobby Ray, and his fascistic, no-bullshit Highway Patrol Office brother, Fasmagger, have other ideas. With the help of Cooters' long-suffering assistant manager, Max, these redneck avengers set out to rescue Melissa and give the Satanists an ass kicking of Biblical proportions.

Unfortunately, their ill-planned intervention merely serves to botch the unholy ritual in progress and all the power of hell is inadvertently transferred into an unlikely host in the form of a recently departed sacrificial chicken. Now, as the forces of redneck good and Satanic evil battle it out between themselves, a demonic, flesh-eating barnyard animal is threatening to engulf their very souls and recruit them in its growing army of the living dead!

You'll laugh. You'll scream. You might cry. You may even wish you were dead, but you definitely won't believe your eyes when you witness the horror of Zombeak, a gore-laden journey into the darkest realms of the imagination that proves evil does, indeed, taste just like chicken.