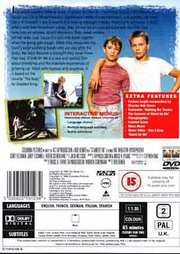 Back Cover of Stand By Me
Related Items 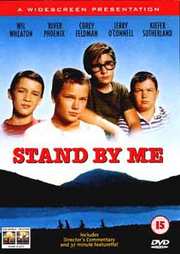 Synopsis:
In a small woodsy Oregon town, a group of friends - sensitive Gordie, tough-guy Chris, and flamboyant Teddy are in search of a missing teenager`s body. Wanting to be heroes in each others` and their hometown`s eyes, they set out on an unforgettable two-day trek that turns into an odyssey of self-discovery.

They sneak smokes, tell tall tales, and band together when the going gets tough. When they encounter the town`s knife-wielding hoods who are also after the body, the boys discover a strength they never knew they had.

Stand By Me is a rare and special film about friendship and the experiences of growing up. Filmed with humour and suspense, it is based on the Stephen King novella `The Body`.

This was (and still is) the most influential movie I`ve ever seen. I first watched it at the age of 15 and it made such a huge impact on me. 12 years later, and after watching it at least a dozen time, the impact remains.
The movie tells the story of four kids going on a two-day trip to look for the body of a missing kid. The movie has it all - funny moments, dangerous moments and sad moments (brilliantly acted). Add to this the best of the late 50`s rock&roll tunes and you get "Stand By Me", a true pearl.
The acting is superb. The young actors do an incredible job and that is admirable since they are so young and inexperienced. The late River Phoenix excels in particular.
You can notice his qualities as an actor even at the tender age of 15, when the movie was shot.
The video transfer is awesome. You cannot tell this movie is almost 16 years old now.
There are no compression signs at all and the images are very crisp. Most of the colors in the movie are de-saturated a bit and this what makes the movie look so real.
The DD 2.0 soundtrack is ok. I wish it was DD 5.1 (for the effects in the forest, the train, the gunshots etc.), but the stereo soundtrack is quite satisfying. The music in the movie is great no matter how many channels it is played through. The movie also includes dubbed versions in 4 or 5 other European languages.
The menus are static and simple. I think it is appropriate for this kind of a movie.
The extras include a great commentary by the director (it`s amazing how this movie reflects both his childhood and the writer`s childhood), an amazing featurette with interviews and behind the scenes looks (including a tribute to the late River Phoenix), a music video ("Stand By Me" - both the original and the newer version with Phoenix and Wheaton singing along with Ben E. King) and an isolated track of the music. All in all, the extras are very good.
Bottom line - sigh - everything I say about this movie would be an understatement. It is THE most nostalgic movie I`ve ever seen and by far the best growing-up story ever told. This is simply a must see (and buy, as soon as the DD 5.1 version is published). If the last line in the script doesn`t make you wonder - nothing ever will. Don`t miss it.
posted by Zvi Josef on 14/1/2001 21:01
9 / 10

Stand By Me "Last Summer"

"When I saw that there`s gonna be Stand By Me Special Edition
to Region 2 dvd I couldn`t believe my eyes.The Stand By Me Quest
had ended" 28llimaH-[at]moc.liamtoh

It was late 80`s when I saw this movie and it felt great
at first sight. Stand By Me has got it`s own special
"uniq" kinda feeling, which cannot be easily forgotten,
so this movie lives forever in our minds. The story is
based to the Stephen Kings novel called "the body" and
with Rob Reiner`s directing the story comes alive. It`s a
story about four kids, called Chris (River Phoenix), Gordie
(Wil Wheaton), Vern (Jerry O`Connell) and Teddy played
by Corey Feldman. They`ll decide to search the body of
some young kid and on their journey, they`ll gotta face the
reality of the real world. Stand By Me is one of the best
movies/drama` ever, because of it`s brilliant storytelling and
amazing realism, which reminds me about my youth, even
I didn`t live in the 50`s.The story reminds also about those nice
adventure feelings, that we used to have when "we" were kids.
All those threehouses and things in the nature are warm feelings
from the past.I bet that nowdays kids won`t build any threehouses,
all they just do is collect Pokemon cards or play playstations
games "25" hours in a day. So, the movie is great, what about the
transfer?Video quality is presented in 1.85:1 widescreen and it looks
as good as it`s possible.It`s got soft colors with sharp picture so it
kicks the vhs version big time.Even the audio is Dolby 2.0 or 1.0 it sounds (thanx Zvi Josef)
better than ever, because you can finally hear those songs clearly.
"(compared to vhs, the sound is superb)".The Stand By Me disc includes
also isolated music score (Jack Nitzsche was a great composer and he
doned great job with movies like One Flew Over The Cuckoo`s Nest, Starman
and The Jewel Of The Nile, but sadly he died last year "if i recall right"),
Talent Files, Valueable Ben E.King Music Video, where
River Phoenix and Wil Wheaton are singing with King (very enjoyable).
Disc also includes audio commentary by Reiner, but it was a big disappointment,
because he had many big "pauses" and when he said something it went like this
"I like this scene, we used to do that when we were kids" or
"that reminds me about my own childhood".So he didn`t tell anything valueable
or very secret, even I could make a better commentary of Stand By Me.
Then there`s excellent new "Walking the tracks" "the summer of stand by"
documentary, where you can see interviews with the great cast like Feldman,
O`Connell, Wheaton, Sutherland, Dreyfuss, director Rob Reiner.
The best documentary I have seen to this date, very emotional,
fun and sad to watch. Specially when there`s no interview with
River Phoenix (my favourite actor with Mark Hamill), because he`s
gone to better place, after having overload of drugs during Halloween
1993 "if I recall right". Phoenix acted in movies like Mosquito Coast,
Indiana Jones And The Last Crusade and he was the original
actor of Interview With The Vampire, which gives more value
to that movie. River Phoenix really was the best actor during that
time and I`ll never forger him (He`s brother Leaf Phoenix is best known
from the movie Gladiator).
posted by Hamill82 on 19/1/2001 11:14
8 / 10

I live for this film. Possibly the greatest adaptation of a Stephen King novel ever. It has everything: great acting, great script, great direction and some truly tear shedding scenes. If you aren`t moved by Gordie`s speech, or Chris laying out his future, and if you aren`t crying at the last line in the film, you are without a soul.
posted by Gangster No 1 on 7/4/2002 02:06
10 / 10

This movie is one of my all time favourites. It is based on a book by Stephen King named The Body. It is about four friends named Gordie,Chris,Teddy and Vern who go to search for the body of a dead boy their own age. They start walking along the railway tacks but along the way there are several things like a bad gang in the town are also wanting to locate the body. Others like when they come to the river they have to cross the railway bridge which is 100 feet above ground and nearly end up getting struck by a train! The rest of the movie is great with a lot of funny parts like Gordie`s story! I would give this movie 10/10. The DVD is great as well with a load of special features like a Director`s commentary and featurette. Any fan of Stephen King should buy this DVD because it is one fantastic movie.
posted by LFC_Lad on 7/6/2003 22:37