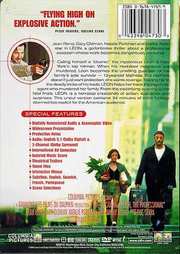 Back Cover of Leon: The Professional Director`s Cut

DVD
Professional, The (aka Leon) (US)

DVD
Messenger, The: The Story of Joan of Arc (US)

DVD
Fifth Element, The (US)

Blu-ray
Joan Of Arc: The Messenger

Article
The Fifth Element comes to Blu-ray in June

Leon: The Professional Director`s Cut (US) 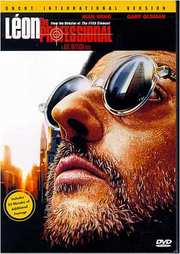 Synopsis:
A perfect assassin. An innocent girl. They have nothing left to lose except each other. He moves without sound. Kills without emotion. Disappears without trace. Only a 12 year old girl knows his weakness.

One of the most eagerly awaited DVD`s is has finally been given a release date. Jean Reno plays the perfect assassin, Leon. Natalie Portman plays Mathilda the not so innocent 12-year-old girl who Leon reluctantly take care of after her parents and little brother are killed in a revenge attack by Stansfield and his gang, after her father gets involved in drugs.

Mathilda who was out of the New York apartment at the time shopping, survives by finding shelter with neighbour Leon. She soon discovers his profession, a hit man, and seeks his help to extract revenge on her families killers. Leon a ruthless killer who is unfamiliar with friendships and fatherly tasks, soon discovers his abilities to love and care for a 12-year-old with nothing to lose.

I have been a big fan of Leon since I saw it a few years ago, so I was looking forward to the DVD treatment - widescreen presentation, picture quality and sound not available on our rather worn VHS, and some extra scenes to spice things up. I certainly wasn`t disappointed!

Leon is an outstanding film, beautifully filmed and directed by Luc Besson, and superbly acted by the three main characters; Jean Reno as the enigmatic assassin, Leon; Gary Oldman as the corrupt DEA official, Stansfield; and Natalie Portman as the embittered Matilda. The film is superb in every aspect - the story is told with incredible skill; the contract between the violence in the film and the touching, sometimes comical scenes between Leon and Matilda show off the skill of both cast and production team. The story evolves through the film with just the right pace; every progression of the characters and the plot seems right, without the lull that some films seem to suffer around the middle. The extra scenes are also a welcome addition; in hindsight, I wouldn`t say their omission detracts from the original film, but they do help to augment the story. The crowning glory to the film, though, is Eric Serra`s superb score, which is very well written, and at all times fits the mood of the film.

The picture quality is excellent. The anamorphic transfer shows a good contrast and colour, and there were no problems with the quality of the film as far as I could see. The end of the opening sequence, where Leon melts into the darkness, was a joy to watch; and that is just one of many scenes where I found myself smiling at the quality of both picture and direction.

The 5.1 audio is also excellent. Serra`s score is carefully balanced so as not to detract from the dialogue - although I have to say that Reno`s accent is a little thick in places (I must admit that I reached for the remote to turn subtitles on for one particular line). That doesn`t detract from the film, though - in a way, it adds some of the charm to his character. Surround effects are limited to gunfire, explosions and the like, and while not as comprehensive as some 5.1 soundtracks, they are again mixed just right.

Not too many extras on this disk, but when the title is as good as this one, you don`t need them. As well as the usual scene access, trailers and ad campaigns, there`s an isolated music score (which, when selected, thoughtfully turns the subtitles on!). I`m in two minds as to whether I would have preferred the isolated score version to have used seamless branching to skip through the parts of the film without background music so I could listen to it as a soundtrack - but then, maybe I`m just too fussy. There are around 23 extra minutes of footage on the disk - mainly concerning Matilda`s relationship with Leon (which becomes almost uncomfortable at time, while never overstepping the mark - a tribute to the acting from both Portman and Reno). It`s good to be offered the chance to see how their relationship develops, and it does go some way to justifying some of the subsequent scenes. The menus are also very nicely animated.

The career aspirations of Mathilda (Natalie Portman) aren`t those of the average 12-year old girl. Instead of wanting to be a doctor, fashion model, teacher, lawyer, or nuclear physicist, Mathilda has decided to follow in the footsteps of her best friend, surrogate father, and protector, Leon (Jean Reno). The only problem is that Leon is a "cleaner" -- a professional hit man ("Cool" is her one-word response when she learns this tidbit of information).

Mathilda comes from a very dysfunctional family. Her father is a drug dealer, his wife (played by Ellen Greene in a wig and performance that strongly recall images of Little Shop of Horrors` Audrey) despises her, and her half-sister enjoys beating her up. Mathilda`s chief pleasure is hanging out in her New York City tenement building`s stairwell, smoking cigarettes.

One day, a crooked cop (played with typical over-the-top exuberance by Gary Oldman) decides to have Mathilda`s whole family exterminated. When she arrives home to find them slaughtered, she goes to Leon, who lives down the hall, for help. Although he`s at first reluctant to open his door to her, once he does, she worms her way into both his life and his heart. And she`s not some wide-eyed innocent; her desire to learn about killing is fueled by the need to exact bloody revenge for her little brother`s murder (she could care less about the other family members).

The real strength of The Professional, however, is the central relationship between Mathilda and Leon. Although not well-founded in reality, these two characters mesh nicely. Despite an occasional low-key hint of sexual attraction, this is basically a father/daughter or mentor/apprentice relationship. There`s nothing unique about a young girl melting the heart of a hardened loner except the manner in which Besson approaches the theme.

Because of the non-American flavor brought to this film by Besson, The Professional is anything but typical fare. It is stylish, darkly humorous, and almost artsy in its approach to the genre. Nevertheless, it delivers what viewers want from any thriller: lots of action. With some surprisingly strong character interaction, there`s a lot to like about this movie, at least for those willing to look beyond all the bloodshed.

The whole point of this release was to provide the full uncut international version of the movie to the US audience, so if that is what you are after, then it is well worth the purchase.
posted by Aslan on 13/4/2002 23:28
8 / 10

This is the definitive version of Luc Besson`s Leon. It lasts about 24 mins longer than the theatrical cut. And the extra footage really does add to the movie. The main characters, Leon and Mathilda, are added to greatly. Most of the extra scenes revolve around the two of them. A modern classic just got better. This version isn`t available in Britain: it only exists in Japan, USA and some parts of Europe.

Picture is great quality and anamorphic for a change (the other versions in USA weren`t and neither is the current British edition). Sound is DD5.1 & DD2.0. Both sound great on my hi-fi system.

Extras are very poor, though: Original trailer for Leon, Joan of Arc and the Big Blue, Isolated score, Biographies and Advertising materials from across the world.

This edition of Leon is definately worth buying as it is the director`s cut. We don`t really need many extras here, although an audio commentary & doc would have been nice.
posted by Richard Knowles on 22/8/2002 21:24
9 / 10

What can I say...? This is a fantastic film, and really is the only version a Leon fan should own. The video and audio quality are both superb, and you get an extra 24 minutes of the film added in for good measure. This extra footage really does add to the film, and it well worth trying to import a copy if you are a fan of the film.

My only gripe is the lack of substantial extras. Don`t get me wrong - I am very happy with the disc, and I know you get an extra 24 mins of film, but I don`t really count that as as "extra" as such. There are a few trailers for other Besson films & a filmography, but`s that it.