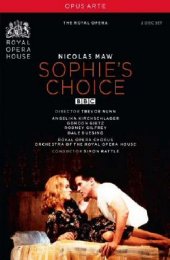 Synopsis:
In 2002, Nicholas Maw's opera Sophie's Choice, based on the novel by William Styron, was given its premiere at the Royal Opera House. The subject had struck Maw when he had first watched the film several years previously, and he immediately felt it would be 'the most extraordinary basis for an opera'. Commissioned by the Royal Opera House and BBC Radio 3, Maw embarked on an adaptation of Styron's book, which took six years to complete. Conducted by Simon Rattle, a long-term enthusiast of Nicholas Maw's music, and with a wonderful cast led by Angelika Kirchschlager, Rod Gilfry, Dale Duesing and Gordon Gietz, the work won international acclaim and was later restaged in Washington, Berlin and Vienna. The Royal Opera House celebrates the work of this British composer, who died in 2009, with the release on DVD of the BBC transmission, as broadcast live in December 2002.