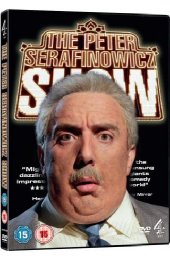 It's a world where sexy Pirates are waiting for your call, Sherlock Holmes and Dr Watson are lovers and you can buy an M&S Christmas Pudding Sofa or a magazine dedicated to Elephants & Trains.

And of course, O! NEWS - A regular strand that's a spoof US entertainment show as seen by hundreds of thousands of internet users on YouTube, in which Peter, as presenter Kennedy St King, reports on Hollywood nonsense ranging from Simon Cowell's new TV hit 'America's best male prostitute' to the new anatomically correct Oscar statuette.