Blood Feast 2: All U Can Eat
Review added by
David Beckett
Places to Buy

Blood Feast 2: All U Can Eat 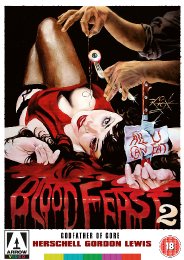 Synopsis:
From the legendary Godfather of Gore, Herschell Gordon Lewis (The Wizard Of Gore; She-Devils On Wheels; Two Thousand Maniacs), comes the fantastically tongue-in-cheek (and in several of the film's more graphic moments, "tongue out of cheek") splatterfest, BLOOD FEAST 2: ALL U CAN EAT, the long-awaited sequel to his 1963 classic "Blood Feast". Once more, Lewis serves up an extra fresh order of brains, guts and various other body parts to prove he's lost none of his blood-soaked touch for comedic carnage and murderous mayhem.
Two generations after the cannibalistic caterer Fuad Ramses wreaked bloody havoc in the suburbs of Miami, his heir and grandson, Fuad Ramses III is on hand to revive the family business. Unaware of his grandfather's indiscretions, and having inherited his ancestor's bakery and confectionary store, young Fuad takes over the premises and sets about establishing himself as the supplier of quality food to the local community. Unfortunately, he is immediately possessed by the long-dormant demonic icon of Ishtar, an ancient, blood hungry goddess. Soon, Fuad is sequentially knocking off the guests of a wedding for which he has been employed to oversee the catering requirements and is using their bloody remains as the secret ingredients in his culinary delights.

Unsuccessfully trying to get to the bottom of the current spate of bizarre murders are a couple of bumbling cops, one of whom is due to be the groom at the forthcoming nuptials, the other a food-junkie who develops an irresistible appetite for Fuad's delicious wares.