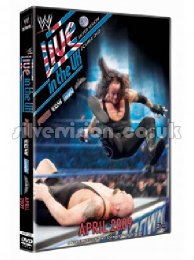 WWE come to the UK only a few times a year and so it is always a big deal. To commemorate the WWE filming all four of their TV shows in the UK, they have released this set. Now, those of you who watch the product regularly know that in terms of quality it goes: Raw, Smackdown, ECW and Superstars. Sure, each show will have its highlights, but recently they are usually squashed between some horrible lowlights. This set features Santina Marella, Hornswoggle, Batista and continual squashing of Chavo Guerrero.

I have to say I hate when WWE show these things on DVD and don't just edit them to not include ad breaks. I must assume that when WWE film their matches, they don't just shut off their cameras when they go to ads. Why don't they show the full match, instead of these jumps where (in terms of the first match of Superstars Rey transforms into CM Punk)? It makes no sense!

Anyway on with the shows:

Raw
Chavo vs. Batista
Poor Chavo! Though I hate to watch Batista for a length of time, this was the very definition of the phrase 'Squash match'. Horrible!

Kane vs. CM Punk
I love both of these guys and I just wish that they had worked together more for a longer period. This was a good match.

Women's Championship Match:
Melina vs. Beth Phoenix
This was an ok match. Both work well together and can at least put on a match that isn't boring or just plain terrible. I got to say I loved Melina's finisher. It just looked amazing.

John Cena vs. Chris Jericho
Any other day this could have been the main event of a PPV. Here it was free. I love Jericho and his work with Cena in the past has been top notch. For TV, this was quite a long match and it's almost a shame that it wasn't a title match to make it even more special.

Rey Mysterio vs. Big Show
Another David vs. Goliath match. This match was just brutal to watch and to be honest; because of this it wasn't that much enjoyable because of it.

No DQ
Triple H vs. Randy Orton
After the Cena/Jericho match, I didn't think this would steal the show…and it didn't. Sure, it was a decent showing from Triple H and Orton, but rather than being an exciting match it was almost like playing 'predict the spot' while watching.

Hornswoggle vs. Natalya
I wish WWE would hire more 'little people' wrestlers as seeing Hornswoggle wrestle women is just embarrassing. This was no different.

Evan Bourne vs. Paul Burchill
Evan Bourne is the future of WWE… or one of them at least. As soon as he is elevated to wrestle a Jericho, Christian or a CM Punk we will see some amazing stuff. Burchill? He could do better, but at least he isn't a pirate anymore!

Vladimir Kozlov vs. Frankie Sloan
Think about this for a second. Kozlov in his debut match facing the British Commonwealth champion Frankie Sloan, who know one has ever heard of. Looking at Sloan, you could be forgiven they just found him in the local pub. This was a strong debut, but as it was a squash it really made no impact whatsoever really.

CM Punk & Rey Mysterio vs. Big Show & Kane
Possibly the most clichéd wrestling match I have ever seen. Two small guys vs. two big guys. So it was a lot of doubleteaming, a lot of high impact moves and Rey being thrown around like a ragdoll. An ok match, just nothing special.

Finlay & Hornswoggle vs. Tyson Kidd and Natalya
This is a mixed tag? So either Hornswoggle or Finlay have a BIG secret that no one is telling us, right? This was just a pure 'for laughs'match spoilt by the fact it is more or less a few minutes and just a squash, which was so that Finlay had the time so he can sing? Wait a minute? Maybe I missed this? I thought he loved to fight, not loved to sing?

Edge vs. Kofi Kingston
This was actually a pretty good match. Rather than being just a squash of a lower-midcarder, Edge and Kofi put on a wonderful performance, some great back and forth, it was only let down by the short length of the match itself. However, it did show that if Kofi is one of the futures of the WWE it will be in good hands when he finally moves up to the main event.

Matt Hardy & Kane vs. Jeff Hardy & CM Punk
It's funny watching CM Punk and Jeff Hardy as team mates now. I suppose it shows that either as partners or as foes, Punk and Jeff Hardy work so well together. The wildcard in this match is Kane, but instead of him being just a lumbering oaf, he is great as the muscle in the team. This almost feels like an X-Division match with so much action back and forth. If only for one night we could get Jeff and CM Punk vs. The Motor City Machineguns, it would be a dream match.

Big Show vs. Undertaker
With Big Show announcing he would be on his way to Raw, I felt so sorry that I wouldn't see this kind of lumbering in a match again. Though I love The Undertaker, watching him in this match was just painful. It seemed all Big Show does throughout this match was forearm shots and head butts. This wasn't exactly the five star match Undertaker had with Shawn Michaels a mere month prior to this.

Divas Championship Match:
Maryse vs. Gail Kim
Maryse has obviously been taking some lessons from The Beautiful People as she entered the ring. Gail Kim is as good as I've ever seen her and I hope that this continues. A nice match, but not a great match.

MVP vs. Chavo Guerrero
Poor Chavo. He was once one of the best wrestlers in the business and after almost a year of being Vicky Guerrero's lacky he has lost his way. However, after a hideous losing streak, MVP has become quite a good wrestler and hopefully his natural charisma will see him in the main event scene soon enough.

Batista & Shane McMahon vs. Ted DiBiase & Cody Rhodes
Come on! How many years has Batista being doing the machine gun/pyro entrance? I mean surely someone would say 'Look either time it right or stop doing it, as it makes you look stupid!' I know, not exactly the biggest issue with Big Dave, but an issue nonetheless. This was a typical Batista 'no-selling' and Shane being far too good to be believable that made Rhodes and Dibiase look useless.

Two bonus matches are included William Regal vs. Dolph Ziggler and R-Truth vs. Umaga. Both are hampered by having no commentary and I just found this extremely lazy. Surely they could have found someone to talk over this. It just feels like both matches were thrown on the disk just for completeness sake. Also included is a one minute photo montage of the WWE European tour, which you could be forgiven for thinking that only two or three WWE stars actually turned up as it was the same people every few seconds.

A special extra included is British Bulldog vs. Shawn Michaels for the European Championship from1997. When you look at this match, the first thing that will shock you is the length. This match is almost thirty minutes long. I don't even think the entire episode of Superstars was that long. For UK fans, this is a look at the late great Daveyboy Smith in his prime and even Shawn Michaels at his best. Now, we can talk about how the ending leaves a bitter taste, but I chose to enjoy the match anyway. The ending is possibly the best example of the phrase 'cheap heat'! However, for those who have never seen this match, it could almost be worth owning this set for this rare match alone.

WWE Live in the UK 2009 is a good set for those who attended any of the shows to relive it. There are some good matches Raw's Cena vs. Jericho, Superstars' Edge vs. Kofi Kingston and that wonderful HBK vs. British Bulldog match are worth the price alone. Just don't be expecting two disks worth of magic as for every good match there's a Batista vs. Chavo one!