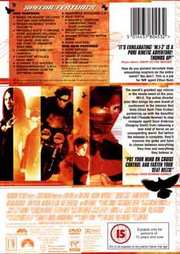 Back Cover of Mission Impossible 2 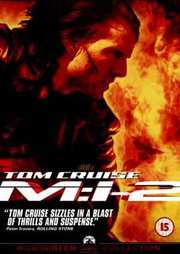 Synopsis:
The world`s greatest spy returns in the movie event of the year, M:I-2.

Top action director John Woo brings his own brand of excitement to the mission that finds Ethan Hunt (Tom Cruise) partnering up with the beautiful Nyah Hall (Thandie Newton) to stop renegade agent Sean Ambrose (Dougray Scott) from releasing a new kind of terror on an unsuspecting world.

This is one of the best Parmount DVDs out at the moment with a wealth of extras. Great picture, great fight scenes, great sound as well, but no plot. There is a five minute difference between region 1 and 2 versions but this is due to the fact the region 2 pal discs runs faster than the region 1 ntsc discs. Loads of extras but no trailer (strange).
posted by David Garner on 26/12/2000 23:57
9 / 10

A good film on a very good DVD. This is not John Woo`s best film and is beaten by Face off and some of his older efforts.
However while the storyline is unoriginal and a little boring the film is very watchable and the action sequences are some of the best.
The picture quality and sound are both excellent.
The extras are both interesting and entertaining but the commentary is fairly boring.
Still a very good DVD.
posted by Anthony Sydric on 17/1/2001 19:20
1 / 10

I had to stare in disbelief at this. John Woo has completely lost it. He has made a Classic like `The Killer` and servel other good bits. also `A Bullet in the Head` which had one of the best first 40 minutes of the 90`s. All 4 of his U.S. have been bad films.

First things first, I liked the previous "MI" a great deal, so I approached this with eager anticipation.

The opening was fairly promising and in keeping with the trends of it`s predecessor (gadgets and schifrin`s music). After that unfortunately, it all went pear-shaped. The fresh and diverse air of the original has been replaced with tired action movie cliche`s, and a tortoise pace. To be blunt, everything in the film that wasn`t action based was downright boring.

The exciting flow that invigorated De Palma`s release is sorely missed and apparently beyond this new team. The various set-pieces were fairly impressive, but so what?. Films (yes, even action films) need a convincing plot, believable occurences and wherever possible, originality. I`m not even going to bother describing Thandie Newton`s "acting" as it barely qualifies as such. I hope John Woo steers clear of the next one. The blend of his idea drought and Tom`s ego are a poor mix. He obviously didn`t put pressure on the cast to perform, as only Scott was describable as adequate. When will people realise it requires a lot of effort to make a good movie (not just a lot of money).

Don`t be fooled, there are many other "no-brainer" flicks much more worthy of your time and money. The real shame is that the time put into the DVD itself, which is quite impressive, could have been better spent elsewhere.
posted by Tony Vado on 25/2/2001 05:01
6 / 10

Without John Woo as the director, this film would not be worth watching. The action scenes are impressive although not as inspired as in Woo’s earlier films like Face/Off and these do not make up for the awful storyline.
Tom Cruise appears in virtually every scene and quickly becomes tiresome as the James Bond wannabe.
The baddie sums him up perfectly, ‘grinning like an idiot every fifteen minutes’.
The extras are far better than the film itself, they go rather in depth into the making of the movie with ‘The World is Not Enough’ style breakdowns of each of the major stunts.
The ‘Mission Improbable’ feature is a good laugh and the Metallica music video is impressive. The commentary by Woo is laughable as he talks about the film as if it’s an Oscar candidate.
Video and sound quality, very good.
Poor film, good DVD.
posted by groovedoctor on 24/3/2001 19:43
9 / 10

Not a bad sequel to a slow paced first movie. I really enjoyed this film because it shows of the array of stunts and action sequences. Paramount have really made this into a descent DVD with plenty of extras. Which include a 13 min documentary talking with cast and crew and a stunt documentary which again is worth watching. I bought this for £9.99 in woolworths the other day a bargain and absolute quality buy.
I didn`t see the point of Anthony Hopkins starring but there.
posted by D.stent on 25/6/2001 15:19
9 / 10

I`m a fan of the first film and the sequel is even better, they`ve put a great deal of work into the DVD version and it really shows, the menus are excellently done & it has some good extras. The picture quality is exceptional and so is the sound - This film is a must for every DVD fan!
posted by Andrew (UK) on 6/7/2002 17:32
7 / 10

MI:2 was heavily criticised in one way or another when it first came out at the cinema, however I'm still a great fan of this film and the DVD as a whole. I liked the original film as well, but I do remember thinking that it would have been interesting to do a similar film just with much more action in it. In a nutshell this is the sequel.

Take away the slightly complicated plot (although why anyone couldn't follow the original I'll never know!) add a how bunch of no brainer action courtesy of John Woo, and you've got yourselves a sequel. Sure it's totally over the top, sure it tries (a little too hard) to be a Bond movie, but I like Bond movies, and I like this.

The video and audio seem pretty good to me. And there do seem to be quite a few extras on the disc. Some of these of worth looking at, others are not. The commentary is OK - filled with some interesting stuff, a lot of praise for Tom Cruise and one or two pauses. It didn't hold my attention long enough to listen to the whole thing, but then it's better than no commentary at all. The alternative title sequence is of no interest whatsoever. Both the interviews and the featurettes are the usual mixed bag of some interesting stuff and some er, well, not-so-interesting-stuff. There's also a music video and a few DVD-ROM features that I haven't actually looked at.

However the best bit about this DVD is the Mission: Incredible spoof with Ben Stiller that's a send-up of Tom Cruise - this is absolutely brilliant, and in my opinion justifies the purchase of this DVD alone!
posted by Rich Davies on 12/9/2002 07:26
7 / 10

Honestly, hands up who went to see "M:I-2" for a thought provoking plot or theatrical acting? I went too see some John Woo action and that's what I got. The plot, a rip from "Notorious" (hmm, how many people called THAT plot bad?) is there simply to hold host to some outstanding John Woo action. The opening mountain climbing scene in not for people suffering from vertigo. I experienced some nausea from it in the cinema. Though it seems more tolerable on the small screen. Then the last forty-five minutes. My God, the last forty-five! For anyone who has never seen a John Woo film before (Hard Boiled, The Killer, Face/Off), Welcome to WOOderland. Although the action is blood free (the 15's cert on this is ridiculous, 12's is far more appropriate), it's still thrilling, adrenaline-pumping stuff, filmed with all the finesse you expect from Woo.

Video: 2000 was the turning point of DVD. It was the year of "X-Men", "Gladiator" and "M:I-2". Transfer that set the benchmark for what DVD could do. "M:I-2" is still as impressive on DVD now as it was back them. No dirt, grain or blemishes. This is a clean, steady picture with fantastic colours and the blackest blacks I've seen so far on DVD. If anything they're too dark. But still, they look "cool".

Visually this film is stunning. And all credit must go to Woo for doing it real and not going the CGI route. And whatever small CGI there is in the film, its perfectly integrated and impossible to tell.

Audio: Warning! This track has the potential to blow a hole in your speakers and your ear drums! Let's see what we have here. 747 blowing up, helicopter fly-bys, LOUD motorbike engines, gunshots, tire squeaks and more explosions. This is one dynamic soundtrack. The mountain climbing scene is excellent. Wind fills the room, you hear the chirps of birds in the distant and the effective placement of Iko Iko in the scene. Bass and surrounds are usually frequently and effective. While dialogue is clear throughout. Hans Zimmer is one of my favourite composers but this has to be one of his worst score. It's not really his fault, Cruise allowed Limp Bizket to butcher Schifren's classic themes tune.

Extras: A John Woo commentary. Woo may be one of my favourite directors but this commentary was a chore to get through. It's not just his English but also the fact that he was so persistent on showing the "great" love story is just wrong. Stick to the action John.

The featurettes "Behind The Mission" and "Mission Incredible" are your usual PR stuff that just manages to rise above the norm. "Impossible Shots" are the main feature on the disc. Featuring a breakdown of 11 action scenes these allow you to under the dangers of the stunts even more. Sadly the Biocyte shoot-out isn't included.

The best feature on the disc is undoubtedly the hilarious "Mission Improbable", starring Ben Stiller as Tom Croose, Cruise's obsessive stunt-double. I challenge anyone not to laugh at this. Rounding of the disc are "I Disappear" Metallica Music Video and an
Alternate Title Sequence.

I didn't watch the trailer of this film when it came out because I wanted to see the film fresh. Sadly the trailer isn't included on the disc so it's doubtful I ever will.

Overall: Thanks to the wonders of DVD, you can know skip to the fantastic ending. Picture and audio are both impeccable while the extras are probably the best Paramount have done for a single movie.
posted by directorscutIMDb on 17/2/2003 18:18
10 / 10

this is one of the best action films ever u can tell why tom cruse right this for himself
posted by black_chuck on 4/3/2003 14:05