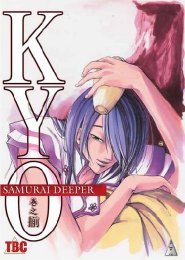 The day I started to watch this second volume of Samurai Deeper Kyo, I dropped a box on my face, and wound up scratching my glasses. My heart sank when I remembered that I have a spare pair. You may get the impression that I haven't been looking forward to this disc. In fact, I have been absolutely dreading it, after a first volume that kept putting me to sleep, even when I tried watching it in the middle of the day, with coffee being fed to me intravenously. But, I have to remind myself that odder things have happened with second volumes.

The year was 1600, and the Battle of Sekigahara was coming to a climax when warriors Kyoshiro Mibu and Demon Eyes Kyo faced each other across a carnage-strewn battlefield. Except their battle was rudely interrupted by a whopping great meteorite, and the two vanished in the explosion. Four years later, Kyoshiro is working as a medicine seller, when a bounty hunter named Yuya captures him. She doesn't have him in custody for long, as a Kenyou demon attacks, intent on slaughtering Kyoshiro. The demon isn't expecting Demon Eyes Kyo to wake up and tear him apart. Somehow, the soul of Demon Eyes Kyo has become resident in Kyoshiro's body, and now that he's finally awake, he wants his original body back. 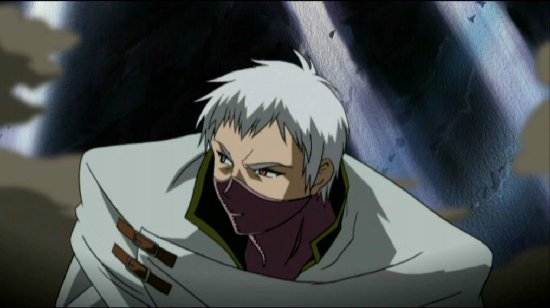 8. Demon Spear Cries
The tournament isn't going the way the Shogun expected. For some reason, brothers Yukimura and Noboyuki aren't trying to slaughter each other. What's a Shogun to do? Call off the tournament, surround the arena with Kenyou demons masquerading as archers, and slaughter the combatants. Except Migeira and Kyo already know that something fishy is going on. The ground rumbles and shakes. There's something beneath the castle, and they'll have to pursue the Shogun and his young aide Santera to find out just what is going on. Santera isn't just a pretty girl with anachronistic glasses; she's one of the Jyunishinsho, and her plan become clear in the caverns below. She's after the Tokugawa treasure, one of the Muramasa swords, and she'll do whatever it takes to get hold of it. Only someone of the Tokugawa blood can save the day, and that someone is Benitora, a.k.a. Hidetada. He'll have to pick up the Hokuraku Shimon Spear and defeat his father the Shogun to prevail. But the Shogun isn't human anymore. 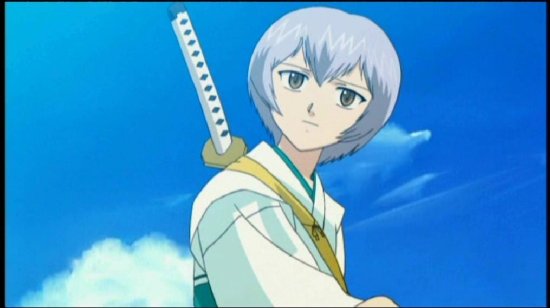 9. The Blind Smile
The survivors gather on the beach, and Kyo and Yukimura decide to finish what the tournament started. But Migeira interrupts their battle, and tells them that he is looking for all five Muramasa swords, to bring them together and defeat the Dark Lord. There are three wielders of Muramasa on the beach right now, and it would make sense to join forces. But heroes really are dumb. Still, Yukimura is inclined to tell Kyo where his body is, when he learns that all that he wants to do when he regains his powers is to kill Kyoshiro, and re-establish his warrior credentials. Benitora just issues one order before he leaves Hanzo in charge and rejoins his friends on their quest, which will now take them to the Forest of Death, where Kyo's body is frozen in ice. Kyo is warned that the one he will have to face will be his former student, Akira, now called Ajira, the Double Headed Dragon. Meanwhile Yuya has bumped into a kindly blind Samurai, and stops in an inn for a chat. Of course that blind Samurai is Akira, and he's pumping Yuya for information, before killing her and hunting down Kyo. A timely rescue doesn't stop him escaping with the rest of the Jyunishinsho though. 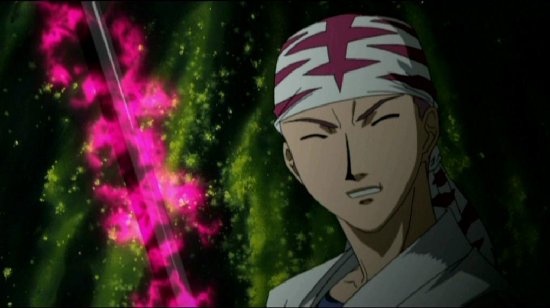 10. Cold Blood Illusion
Kyo's impatient to get going to the Forest of Death, and his comrades have to rush to keep up. Yuya's determined to stick with him after she learned that he may know who the man with the cross-shaped scar on his back is, the man who killed her brother. They stop at an inn, an unexpected luxury on their journey, and they are soon relaxing in some hot springs, where Yuya has to fend off Benitora's advances. It's a trap of course, and they are attacked by a bunch of creepy dolls. Kubira, one of the Jyunishinsho is there, a puppet master looking to kill Demon Eyes Kyo, but then, in the heat of battle, one of the dolls slashes Kyo's back. As the cloth parts, Yuya sees on Kyo's back, a cross-shaped scar!

11. Pitch Black Flashback
Benitora got separated from the others in the mayhem of the previous battle, and he now finds himself alone, wandering through familiar territory. The ruins of a building are all that remains of the place where he received his training, and that reminds him of the tragedy that befell his master. Right on time, his fellow student of the Shinkage technique, Gihyo appears, only now he is a Jyunishinsho named Mekira, and he has scores to settle with Benitora. And Benitora hasn't even mastered his Muramasa yet. Battle commences, as do the extensive flashback sequences. The clue is in the title. 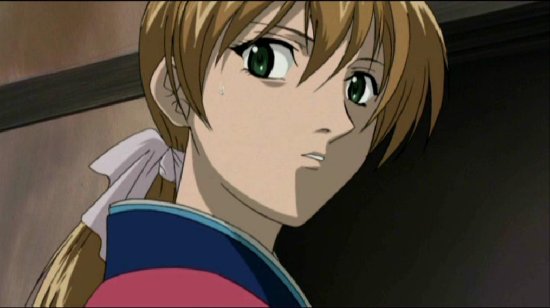 12. The Boy From the Deep Forest
Now Yukimura's comrade in arms Sasuke Sarutobi has shown up. He's there at Yukimura's behest, to guide them through the forest, but the first thing he does is pick a fight with Kyo to see who has the better sword. It's a fight that is going to be cut short, as the next Jyunishinsho shows up to battle Kyo. But this time he has brought an ally, Makora. It looks like an evenly matched fight, then Sasuke recognises who Makora actually is, and freezes in the midst of battle.

13. Crossing Souls
Where's everyone going? Okuni wandered off into the woods somewhere, Sasuke has rushed off to finish his fight with Makora, and when Yuya begins to worry about Okuni, Benitora offers to go and look for her. That leaves just Kyo and Yuya trudging through the forest, when they are attacked by two Jyunishinsho. 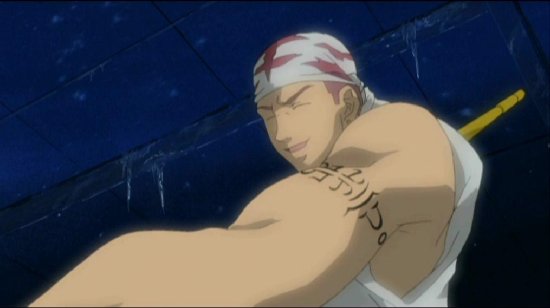 The 1.78:1 anamorphic transfer is unproblematic. It's an NTSC-PAL standards conversion quite naturally, but other than a slight softness and the odd uneven pan, it's all pretty much par for the course for anime. The colours are bright and consistent, the image is clear and well defined, and there's no problem with artefacts or compression, even with the bumper six episodes on the disc. The animation itself is cheap and unimpressive, simple character designs out of place with the setting of the show, lots of use of chibi and deformed moments for comedy, and an egregious amount of freeze frame used instead of actual animation. Anime usually gets away with a lower frame count than its western counterparts, but there were times that this felt like a slideshow. 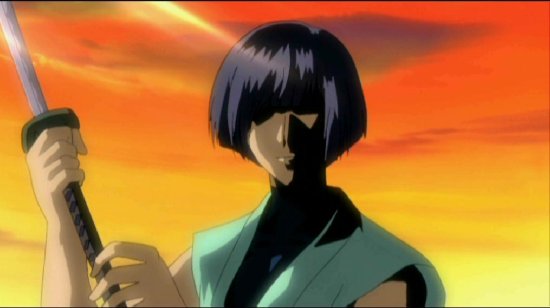 You have a choice between DD 2.0 Stereo English and Japanese, along with optional translated subtitles and a signs only track. I opted for the original language track, and the dialogue is clear throughout, the action is adequate, and the forgettable pop-rock opening theme is on a level with the equally dull closer.

The sole extra on this disc is a 7-minute interview with character designer Manabu Fukazawa. Samurai Deeper Kyo is his first job as a character designer, and he talks about the difficulty of differentiating Kyo and Kyoshiro.

At moments like this I like to console myself with the thought that there is karma in the world, that for every positive, there has to be a negative, and for all the good anime I get to review, I have to review some of the stinkers as well. It's a nice idea, but with Samurai Deeper Kyo, it fails. This is awfulness that transcends karma, and no, I didn't have a second volume epiphany. In fact this second set of episodes was even more tedious and soul sapping than the first. In fact, the only, insignificant bright spot was that there was one fewer episode this time around. 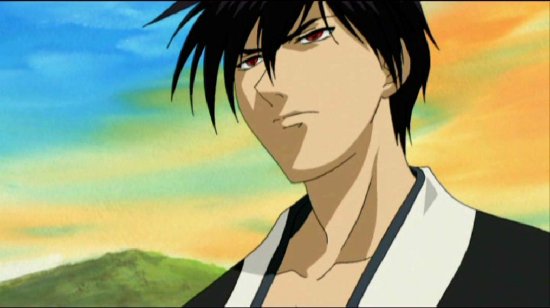 It's your typical shonen quest action anime, with a hero type, gathering a band of like-minded action heroes around him, and venturing off to fulfil some arcane destiny that involves fighting various bad guys to the death. Lots of male bonding, lots of posturing, and plenty of fights that flip flop between combatants, but always winding up with good triumphing over evil. There is a lot, a whole lot of anime like this, but somehow Samurai Deeper Kyo manages to plumb the depths of the genre. Just when you think a show couldn't be more clichéd… 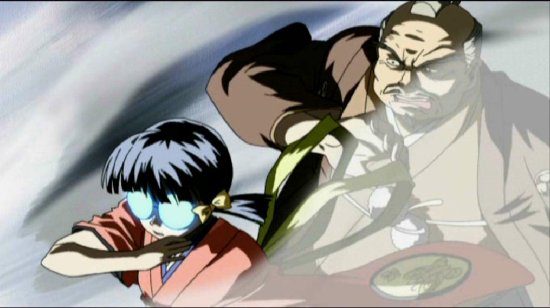 The characters are still un-involving, the story is pitifully thin, and the dialogue is awful. There's one point on this disc, where Yukimura says farewell to Demon Eyes Kyo, with the immortal lines, "Stay alive, as only I will be the one to kill you". That's your male bonding right there, a cliché so well worn it's practically threadbare, and delivered with the insouciance of a show that knows that it has nothing better in its arsenal, but by damn, it will deploy it with all the gusto it has. I hear lines like this on a regular basis in my lowest common denominator anime, but this is the first time in a long time that it has had me cursing a blue streak at my television screen. The lack of animation didn't help either. 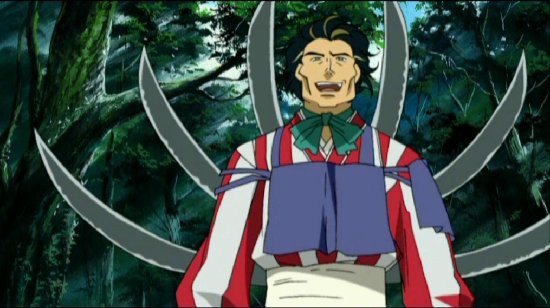 This volume sees the conclusion of the first, barely motivated arc, which saw Kyo and friends entered into the Samurai tournament, with an apparently stunning revelation of the secret conspiracy behind the whole thing. This leads to the next arc, which introduces the villains of the piece, the Jyunishinsho, vassals of the evil Lord whose resurrection was interrupted by the meteor, and who are now working to fully resurrect him four year later. For some reason this means killing Kyo, and preventing him from getting his original body back. The Jyunishinsho are warriors who made a deal with the devil to become Kenyou demons, and can now transform their bodies at will into vicious monsters. So the monster of the week scenario continues unabated. For some reason, gathering all the Muramasa swords together will help resolve this, so now the plot becomes slightly more complex. We end on a cliffhanger as the Jyunishinsho kidnap Yuya, and so we have to wait till volume 3 to see if I start to care. 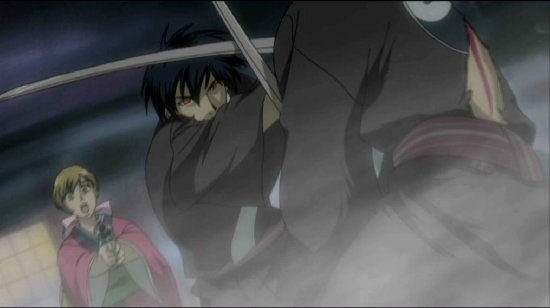 Samurai are cool, blokes swinging big swords around with abandon. Demons are cool too, honking great monsters terrorising the innocent, and requiring despatch by those aforementioned blokes with big swords. So Samurai Deeper Kyo ought to be a must have anime, the ideal show if you want to get your foot on the ladder and get an idea of what all this anime stuff is about, right? Not so much. I wouldn't recommend this show at all, in fact, I'd advise anyone to steer clear for the sake of their sanity.