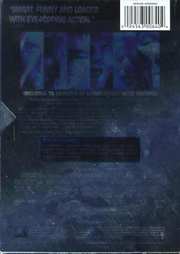 Back Cover of X Men

Blu-ray
X-Men: Days of Future Past 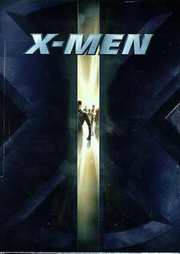 Synopsis:
Born into a world filled with prejudice are children who possess extraordinary and dangerous powers, the result of unique genetic mutations. Cyclops unleashes bolts of energy from his eyes. Storm can manipulate the weather at will. Rogue absorbs the life force of anyone she touches. But under the tutelage of Professor Xavier (Patrick Stewart), those and other outcasts learn to harness their powers for the good of mankind.

Now they must protect those who fear them as the nefarious Magneto (Ian McKellen), who believes humans and mutants can never co-exist, unveils his sinister plan for the future!

Pulsing with state-of-the-art visual effects and unforgettable characters, X-Men "delivers it all!" (ABC-TV)

A cool home theater show-off movie. Forget the plot, it`s way too childish and predictable - look for the special effects and the sound.
The video transfer is perfect. The movie is brand new, thus the transfer is very impressive with a crisp image and great colors. There are no compression signs at all.
The DD 5.1 soundtrack is also very impressive. This is definitely a play-it-at-high-volume movie. The surrounds are constantly used and are used very nicely.
The menus are awesome. They are fully animated and have sounds effects as well.
The extras include a regular behind the scenes look, a picture gallery, some interviews, but alas, no commentary.
All in all, if you`re looking for visual effects and sound effects, this is your movie. If you`re looking for a good story, do look elsewhere.
posted by Zvi Josef on 21/11/2000 07:34
9 / 10

As soon as you lay eyes on the case you will think WOW!!! X-men instantly looks like quality. The extras are great. The making of, character artwork, branching version and even THX, it`s all there. That`s all before you even watch the movie. What it all comes down to, is, "true-to-comic" x-men action. If you like the comic then you will love this. There are lots of bits in the movie where you will say " I remember reading that", and you would be right. The director, Brian Singer has made a god job in not making it seem like a big hyped up version of the comic strip, keeping it low key with some explosive action sequences. Real power is given to the viewer by the sheer presence of all the characters. Just how cool can Wolverine get??? not much more i`m sure. You have to buy it...please, do yourself a favour. Just watch out for the second movie..........enter Gambit. Oh and another thing, hook it upto your Hi-Fi, turn up the volume and listen to that rumble that is the THX sequence.
posted by formatted on 8/1/2001 02:57
9 / 10

The war is coming, are you sure you`re on the right side?

X-Men was one of those marvel comics, that I also used to read as a kid
and I still remember how great those characters were, specially how
cool the Wolverine was. So, now the old story of X-Men comes to life
with the 21st century computer technology and it looks great. I went
to see the X-Men in the theathre two times and after that I was really
waiting for the dvd release and now it`s here. The packaging (reminds
lots of Fight Club`s packaging) of this dvd is superb, with beautiful
covers and cool X-Men pics inside the silver packet. The outlook is perfect,
but what about the stuff inside the disc. The menus are good, but
they could have been even better.The extra features are brilliant,
with good fox special "the mutant watch", interviews with Bryan Singer,
some good trailers, tv spots, Hugh Jackman screen test, still gallery,
cool animatics, "easter eggs" = (pics of new characters, spiderman
appears in to the set) and 10 minutes of never-before-seen footage
(the extra footage doesn`t work well in the movie and I recommend
that you just check those extra scenes).The only problem is the amount of
extra features, because it takes only over an hour the look them all.
The quality of video is awesome with "rich blue shadow colors"
and very sharp picture. Audio quality was also excellent,
with thundering Michael Kamen`s score and ultra clear sound.
I just didn`t find anything negative about the video or
audio quality, they are perfect.The movie is good, but not great,
because the movie was just too short, character`s developing didn`t
get to the level that I was hoping for and in the end it leaves you hungry.
Maybe it`s so short, because 20th century fox wanted to make it ready
for the summer 2000, maybe they were rushing too much, I don`t know.
Overall this dvd is one of best 20th century fox releases and it must
have it`s place in every dvd fan`s collection.

I never seen this at the cinema but I wish i`d had, a great movie with a good set of characters in.The video is extremely crisp and sharp with a great use of colour. The DD 5.1 sound is also impressive. A good amount of extras included with a couple of easter eggs included. Overall a great dvd but with the film being a bit short you`re begging for more.Lets hope that next years sequel is even better.
posted by David Garner on 31/1/2001 12:08
8 / 10

The X-Men, my favourite Marvel characters of all (with perhaps the exception of Spiderman), have finally been given their own movie! Has the long-awaited transition from comic book to big screen been worth the wait?

The story centres around two factions of powerful mutants – The Brotherhood of Mutants; led by master of magnetism Magneto, believe that humans and mutants can never co-exist peacefully. They are convinced that war is inevitable and are prepared to protect themselves at all costs. To this end they kidnap senator Robert Kelley, an anti-mutant campaigner, and use him to test a mutating device, which alters his genetic code, as a precursor to a full-scale test of the device.

The latter group of mutants, known as the X-Men, are led by Professor Charles Xavier, a wheelchair-bound telepath who has established a school for the gifted (i.e. mutants), in order to teach them how to better control their powers. They seek to prevent Magneto and his followers from carrying out their plans.

The story is fairly sound, and the performances are fine, but I can’t help feeling that more could have been done with the material. The number of mutants is fairly limited, and the choice a little odd. That said, I guess they had to start somewhere. It would have been nice to see Colossus, Nightcrawler and Beast etc. Still, they have included Wolverine, perhaps the coolest mutant around, with his indestructible adamantium skeleton, foot-long claws and super healing ability. In fact, most of the story centres on Wolverine and his relationship with Rogue, a young girl who possesses the power to absorb the powers and life force of anyone she touches (unfortunately seen here before she permanently absorbed super human strength, invulnerability and the ability to fly). The biggest criticism I have is that the mutant’s powers are fairly tame in comparison to the comic book, especially Magneto and Jean Grey (the ever lovely Famke Janssen).

Still, those are the bad points; the good points do enough to offset them. Basically when the two sets of mutants do get it on, the sparks really fly. Wolverine is as hard as nails, as is his counterpart Sabretooth. Ray Park (Darth Maul in Episode 1) leaps all over the shop as Toad, Storm has her cool weather control powers, Cyclops has his usual optic blasts. One of the best things in the film has to be Mystique, the shape shifter (played by Rebecca Romijn-Stamos). The transformation effects are fantastic, and the fact that her costume consists mostly of blue dye isn’t bad either.

Video is pretty much flawless. The anamorphic 2.35:1 image is definitely one to show off the capabilities of DVD to you VHS owning mates. Obviously this is a very recent film, so only the highest quality transfer would have sufficed. I’m pleased to say that you won’t be disappointed with what’s on offer here as it’s reference quality.

Audio is also good, and comes in both Dolby 5.1 and surround formats. The 5.1 mix is great, and the surrounds are constantly used during the film. One of the best examples of this is the way Professor Xavier’s voice echoes around the soundstage when he uses his telepathic abilities.

Extras are surprisingly sparse. There are some deleted scenes, which can be integrated into the film via seamless branching, but these are not up to the standard of the rest of the audio/video. They don’t really add a lot to the proceedings either. There is a short interview with director Bryan Singer, some trailers and TV spots, a stills gallery and animatics and Hugh Jackman’s (Wolverine) screen test. The longest of the extras is the ‘Mutant Watch’ featurette, a sort of faux senate hearing in which senator Kelley rants on about genetic purity while interviews and clips from the movie are interspersed with the mock hearing. As well as the advertised extras, the disc includes a couple of Easter eggs, in the form of some sketches for mutants who didn’t make it into the film, and an amusing cameo from one of New York’s most recognisable super heroes.

Overall, this is an enjoyable romp with good special effects and fantastic audio and video quality. If you`re looking for an engrossing plot, try another Bryan Singer film, The Usual Suspects. If however you`re just looking for a way to while away 104 minutes, you could do a lot worse than this. I just wish it had been a bit longer so we could have seen some really cool mutant power battles!
posted by Chris Gould on 20/4/2001 06:30
7 / 10

For me getting this october 2000 was a sneak preview and I couldn`t bother to wait for the Region 2 release early 2001. Im not dissapointed really the storyline is ace in the film and is obviously open for a sequel to come. The special effects are top notch and DVD representation good I also think they could have added to the features as of region 2.
posted by D.stent on 10/8/2001 22:50
7 / 10

Content:- Well this film is a bit so-so in my opinion. The acting is great, the action active and the whole film has a lively feel to it, very comic book like - but something feels wrong. Maybe this film is not being faithful enough to the original concepts or maybe I am just being a pain in the ass. Well either way it is still an enjoyable and well crafted piece of work that even verges on being intelligent sometimes. (Sometimes). It`s fun.

Video:- It`s a new film, and guess what - the transfer is perfect. Cool.

Audio:- Basically a case of `ditto` here. The soundtrack is damn good, a very nice score accompanied by some good use of effects. Aye.

Features:- Well this disc has to feature THE MOST annoying menus on any disc I have ever seen! They were not that easy to use either. There is an ok selection of extras here aswell, although I do feel that it falls short. A film with this kind of exposure should have every kind of extra available, or close to it - but it doesnt. A shame really.

Overall:- The film is `fine`, the audio and video are flawless but the extras could have been better. Still worth buying for the film as it really is ok, just again not perfect.