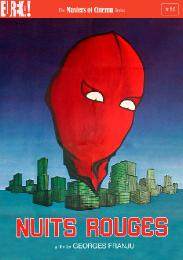 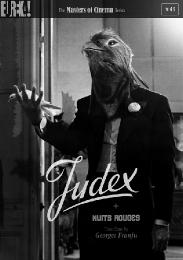 Synopsis:
The magical, rarely seen Judex -- directed by the great Georges Franju (Eyes Without a Face) -- was largely unappreciated at the time of its release in 1963. This lyrical and dreamlike picture, a putative "remake" of Louis Feuillade's own 1916 Judex, is as evocative of the silent master's own works as it is the later films of Jean Cocteau and Salvador Dalí. A French reviewer wrote in 1963: "The whole of Judex reminds us that film is a privileged medium for the expression of poetic magic".

Starring the magician Channing Pollock, the divine Edith Scob, and the mesmerising Francine Bergé, Judex concerns a wicked banker, his helpless daughter, and a mysterious avenger. It plays like a fairy tale -- one in which Franju creates a dazzling clash between good and evil, eschewing interest in the psychological aspects of his characters for unexplained twists and turns in the action. The beautifully controlled imagery, superbly rendered by Marcel Fradetal's black-against-white photography, animates a natural world and the spirits of animals all at war with a host of diabolical forces.

Franju's Judex and Nuits rouges both paid overt homage to the surreal, silent serial-works of Feuillade. Scripted in collaboration with Feuillade's grandson -- Jacques Champreux -- these films evince the same poetic magic that made the art of that earlier master a cause célèbre not only for the Surrealist movement, but also for the world-renowned Cinémathèque Française. It was the Cinémathèque (co-founded by the legendary Henri Langlois with Franju) that helped resurrect the reputation of Feuillade decades after he'd slipped out of the public consciousness.

Nuits rouges [Red Nights] -- released in the UK as Shadowman -- was the second Franju-Champreux meditation upon the films of Feuillade. It aggressively escalates a pulp atmosphere steeped in shocking turns of events to an even more vertiginous level. Here, the object of pursuit is the fabled treasure of the mythical order of the Knights Templar -- which the filmmakers use as the jump-off point for staging a series of fantastic set-pieces. As the Fantômas-esque arch-criminal (known only as "The Man Without a Face", played by Jacques Champreux himself) violently pursues the treasure, the action intensifies amongst a cadre of post-'68 bohemians, the Paris police bureau, and a cult of cowled conspirators.