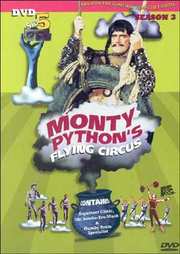 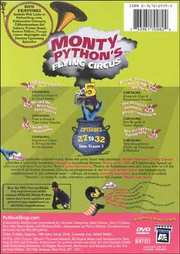 DVD
Monty Python and the Holy Grail (US)

The fifth double-disc set of Monty Python episodes from A&E, contains episodes 27 to 32 of this much-loved classic TV series. These episodes made up the first half of the third season, and pretty much continue where the earlier two seasons left off.

On to the discs themselves.

Video quality is as good as can be expected for a 29 year old TV series that has been converted from PAL to NTSC.

It`s a travesty that Python fans have to import NTSC discs to watch their favourite show, but thankfully the quality is good enough. Certainly better than my VHS copies.

Again, as good as can be expected. A DD2.0 stereo track is available, which is just really the mono recording played back over both channels. It sounds good enough, so no complaints in this department either.

As well as three episodes on each disk, we even get a selection of extras.

On the first disk these include "Gillianimations" - a collection of animation segments, "Meet the Chaps" which is the biography section, but which also includes a brief sketch for each of the team, "Pythonisms" - a useful dictionary to help you speak Python, partially aimed at the American audience (who the disk is really for of course), "Pet Peeves" - a small selection of animal related sketches, including Fish Licence and Buying an Ant. And to round off there`s the live version of the Argument sketch.

On the second disk we get "Meet The Chaps" again, with different sketches to introduce them, another trivia quiz "A Trivial Quest", which is fairly easy for fans and rewards you with more sketches, a collection of "Amazing Feats" which include "Tower Block building with El Mystico", and the many appearances of "Ron Obvious" and finally the live version of the "Travel Agent" sketch.

A very well presented set of extras, and good to see that some effort has gone into these discs.

A chance to own another classic slice of Monty Python on DVD. Fans should snap these up as there`s still no news of the full series being released in region 2.

Plenty of classic sketches on offer including "Whicker Island", "Emigration from Surbiton to Hounslow", "The Fish-slapping Dance", "The Money Programme", "Merchant Banker", "Hairdresser`s expedition to Everest" and many more.

A must buy for fans everywhere.