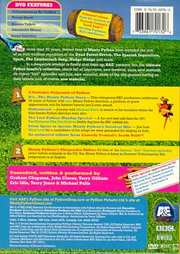 Back Cover of Monty Python: The Life Of Python
Related Items

Monty Python: The Life Of Python (US) 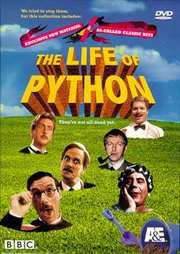 Synopsis:
For more than 30 years, devout fans of Monty Python have tortured the rest of us with endless repetition of the "Dead Parrot Sketch", "The Spanish Inquisition", "Spam", "The Lumberjack Song", "Nudge Nudge" and more.
In a desperate attempt to shut them up, A&E presents this, the ultimate PYTHON fanatic`s collection, chock full of interviews, new material, "lost" episodes, new material, shots of the old geezers sitting on their laurels, and, of course, new material.

DVD 1
It`s The Monty Python Story - This outrageous BBC production celebrates 30 years of Python with new Monty Python sketches, a plethora of guest appearances anf the funniest funeral you`ll ever attend.
Pythonland-Journey with Michael Palin in search of the locations where the best-known Python sketches were shot.
The Lost Python Mayday Special - A fun and fusty relic from the 1971 Pan-European May Day Festival, freshly dug from the BBC rubbish bin.
From Spam to Sperm: Monty Python`s Greates Hits - Join host Meat Loaf for a countdown of the songs we were grounded for singing as kids.
Animated tribute from the creators of Comedy Central`s South Park starring Cartman, Kyle and Kenny!

DVD 2
Monty Python`s Fliegender Zirkus #2
One of the famous "lost" German episodes never before available in the U.S. Yes, Monty Python is funny in German! Unfortunately, this programme is in English.