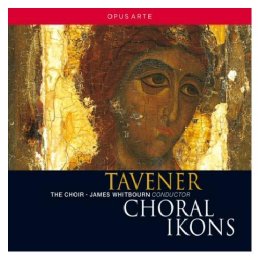 Released as a companion-piece to Opus Arte's DVD of the same name, this CD contains all the music from that DVD, played (or indeed, sung) almost without a break.

Tavener's choral sound is one of great homage and reverence to the traditional Christian Orthodox music created over many hundreds of years, and which was also a huge unfluence on Rachmaninov's great All-Night Vigil (Vespers) of 1915.

Here, we have eleven of his most striking and unmistakenly 'Tavenerish' works, recorded in July 2000 at St. Alban's Abbey and Hilversum Studios in The Netherlands, and there is obviously an attempt to add an 'ethereal' amount of echo from the studio recording(s) which attempts to match the abbeys natural ambience. This is not always successful (although it's not made clear which piece was recorded where) as there are times, notable in the 'Nunc Dimitis', where his more complex moving vocal lines can become rather muddy.

Another slight complaint would be that the baritone soloist has a vibrato that may be an attempt to sound more 'Russian', yet this just creates a jarring sound that ruins the mood, especially within the expansive, yet surprisingly 'cut short' 'Hymn of the Unwaning Light'.

Having said that, the works flow very well into each other, as Tavener's style of using drones wherever he can underneath an effective homophonic covering are a recurring theme throughout much of the music.

I'm also very pleased that the CD contains a hugely affecting performance of 'Song for Athene', which will be best known for being performed at the funeral of Princess Diana in 1997, and which has become Taverner's most popular choral work - simple, yet incredibly moving

The CD package is excellent, with all the song words printed, and some enlightening contributions from the composer himself and Robert J. Roozemond.

Overall, the works on offer show how effective the unadulterated human voice can be in expressing the often inexpressable, and so despite any reservations expressed earlier on, this CD can be highly recommended for those who would like to explore Tavener's sound world, or even if you just need some time to contemplate.