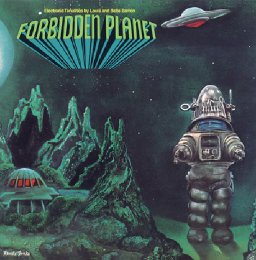 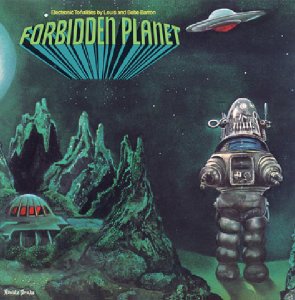 Forbidden Planet is a classic science fiction film starring the then rather serious Leslie Nielsen with its plot based on Shakespeare's The Tempest. Forbidden Planet was slightly different to other sci-fi films of the time for three reasons: the use of respected actors such as Nielsen and Walter Pidgeon, the extraordinary and detailed visual style of Mentor Huebner and finally the innovative electronic score.

The music for the film was created by Louis and Bebe Barron in what was to be their only Hollywood score, credited as being the first completely electronic score and composed from elctronic circuits that Louis Barron had himself constructed. After recording the basic sounds, both Louis and his wife Bebe would manipulate the sounds by adding effects such as reverb and delay. The couple also experimented with reversal of said sounds or changing the speeds of some of them. Most of this work was created using tape recording loops in an example of possibly the earliest experiments in tape recording techniques.

The sad thing about this soundtrack is that despite film-goers and critics raving over this quite frankly new sonic experience, the powerful Musicians Union decided that it was not and could not be described as music and was therefore credited on the film as "electronic tonalities". This had the effect that the soundtrack became ineligible for Academy recognition as this description didn't fit into either the music or special effects categories.

Sadly, and probably because of the fuss over it, Forbidden Planet was the Barrons only Hollywood soundtrack. Despite this, the soundtrack has stood the test of time and stands out as a great example of electronic experimentation. This is not the first time that this soundtrack has been re-released (the last time was only in 2006) and this is a testament to its popularity, although not having owned a copy previously I can't compare audio quality to any previous versions. All I can say is that it sounds clear and rather fabulous. There are 22 tracks in total ranging from 40 seconds to over 5 minutes, each with a rather obvious title linking it to a specific scene within the films such as "Robby Arranges Flowers, Zaps Monkey" and "Robby, The Cook, And 60 Gallons of Booze". Quite quaint really.

Let's be clear though, this is not for everyone. This isn't really music as we know it traditionally, each track is essentially a collage of sounds and although the overall effect is musical, it may not sit well on everyone's ears as it can be quite a difficult listen - albeit a very rewarding one for those who can peservere. Overall the soundtrack feels rather unsettling and also terrifying at times as the sounds get almost unbearable (the monster attack in particular) but also at times expresses a warmth that you weren't quite expecting as it follows the scenes from the film. To describe the music presented can be quite difficult but it's easier to recongnise the soundtrack as an important musical historical document and an major milestone in electronic music.

And ultimately I think, this is how potential listeners should view this. It's not an album that you'll throw on to impress your friends or during a party but it's great for solo listening in the dark, pondering over the creativity that was poured into this electronic masterpiece whilst considering how this ultimately led to where we are now...