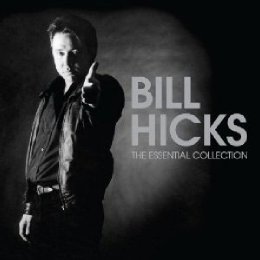 Bill Hicks has a reputation as satirist and social critic who just happened to also be a stand-up comic. Hicks career was a relatively short one, his life cut short by pancreatic cancer in 1994. Despite this, he was recently voted the 4th greatest stand-up comedian of all time in 2010 by a Channel 4 programme. Hicks schtick was to rail against society and the mainstream, his social commentary coming to the fore during material covering politics, religion, pro-life, pornography, drugs and artisitic integrity amongst others. Hicks material was frequently dark and was in places more like rants than the more usual stand-up delivery and also included mock gun fire sound effects.

Rykodisc has decided that the time was right to issue a 2CD/2DVD collection of material they deem to be essential, despite much of it
apparently being unreleased to date. Housed in a rather old fashioned double CD case, they've made a good fist of delivering a well designed
product. The artwork is all black as befits the man and there's a booklet included that contains liner notes from members of the Hicks family as
well as Clive Anderson, Henry Rollins and Eric Bogosian. The second paper based extra is a mini map of the US that serves as a Hick tour log, marking all the locations in the US where he performed. Finally there's a download card for a series of mp3 files of songs bannered together under the title The Lo-Fi Troubadour, the near dozen tracks all mastered at Abbey Road Studio's.

The two CD's are not full sets by Hicks; instead they serve, I guess, as a kind of Greatest Hits collection of portions of routines. Plucked from various portions of his career, they are grouped together mainly based on subject matter. So CD1 mainly focuses on ego & artistic integrity and pornography, whilst CD2 has drugs, homosexuality, children & pro-life and smoking. I have no idea if this entire set is a clear indication of a typical set but I'm going to guess it probably is based on the following two DVD's.

The first DVD of the set focuses on Hicks early years on the stand-up circuit with filmed performances dating from 1981 through to 1986.  There are five segments here, with four of them filmed in Houston, Texas and the other one in Indianapolis. This is followed by a segment on The Outlaw Comics with both a performance and an interview that explores the origins of the band of comics - that doesn't really make that much sense to be honest.

The second DVD consists of short cult film Ninja Bachelor Party and rare archive performance footage from Austin, Texas - these four pieces are known as the Austin Bootleg series.  First thing to say is that the short film Ninja Bachelor Party is crap. I can't remember the last time I watched something so bad and unfunny. It didn't help, or may be it did in the end, that the picture was so bad and blurry but I just found it incredibly boring and not in the least bit funny. The archive footage segments were filmed by Hicks' brother Steve between November 1991 and October 1993, and there is a fair bit of repetition here. Due to the nature of a series of films named The Bootleg series, don't be expecting high quality visuals.

Maybe I need a little more exposure to the comedy values of Bill Hicks, but I didn't find him that funny to be honest. Maybe it's because I'm not much of a comedy fan, it could be that, or it could just be that I found Hicks style of comedy to be too mean and also more than a little childish with his inclusion of comedy special effects, mainly gun fire it must be said. Sure, he got a few laughs from me, but I expected more from someone who is clearly thought of as an influential comedian and satirist.

Ah well, so I'm not a fan myself. I've just discovered something new. On the other hand, I can't deny that despite the picture quality issues, that
Rykodisc have put together a rather classy and well thought out collection that may well have Hicks fans laughing in the aisles - or at least on their sofa's...

I think Hicks was a real comedy genius, he may sound bitter and crude at times, and he can certainly not be considered easy listening. But like any comedian, you have to look at what he is attacking with his vitriol to understand where he is coming from.

If memory serves, it was the hypocrisy of the government at the time, although many might say the words "at the time" can be left off that sentence.

Some comics are mean because, well they are just tossers. Hicks delivery comes from anger at what he sees as injustice, it's a sort of political comedy that is rare these days.

But I can see it not being to everyones tastes.
posted by RJS on 6/10/2010 14:34
In my opinion he was a groundbreaking comedian and there really hasn't been anyone like him since then.  Some of this material was (and still is) extremely tough.  There was an incident when he said that anyone in the audience who is in the advertising industry should kill themselves and, once the audience at stop laughing, he said he was absolutely serious and that the world would be a better place without them!  You could make the same argument for a number of different professions but, at the time, he clearly had a bee in his bonnet about a certain commercial or series of billboards.

I love his stuff and the American Ryko R0 DVD containing Relentless and Revelations (as well as One Night Stand) gigs is highly recommended.
posted by David Beckett on 8/10/2010 08:06
This "Essential Collection" is not the right place to start. Relentless or Revelations would be a much better introduction.

Some of the material is very much of its time, some is definitely timeless.