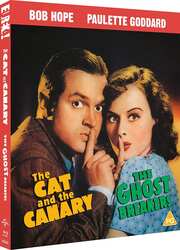 The Cat and the Canary & The Ghost Breakers (Blu-ray Details) 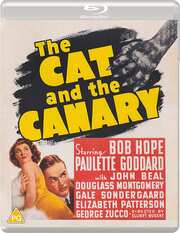 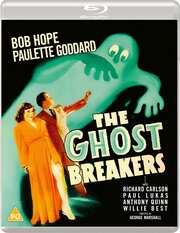 Review for The Cat and the Canary & The Ghost Breakers

I got things backwards again. I always thought that the genre came first, and then came the spoofs. But according to the Kim Newman interview on this disc, the two horror comedies featuring Bob Hope and Paulette Goddard were nostalgia pieces looking back to a bygone Hollywood, stories that had been remade on more than one occasion to that point, beginning with theatrical productions that moved to the silent screen. The idea of having a wise-cracking, Vaudeville comic in the lead role wasn’t even a new one, even though these films were significant milestones in the career of Bob Hope. 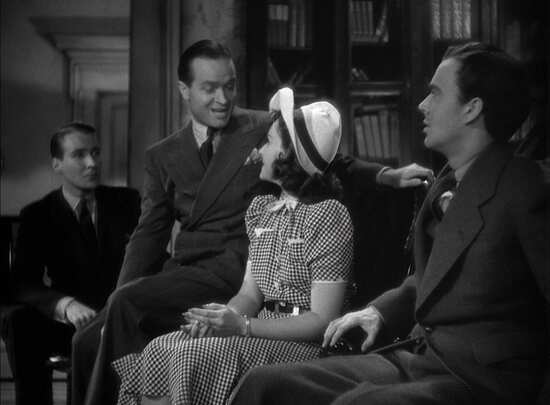 I’ve said before that horror isn’t my favourite genre. It’s a combination of finding it tedious, and being unable to take it seriously, although there are the odd pure horror titles that do sneak under my radar. But when you put a character in who can’t take it seriously, and starts sending the whole thing up, that’s a horror movie that grabs my attention. Put someone like Bob Hope in a spooky situation and let him fly with the wry commentary, and I’m being entertained. It’s a legacy that stretches through the years, all the way to Bill Murray in Ghostbusters, and that’s one of my favourite movies.

The first run release will come with a 20 page booklet with writing from Craig Ian Mann, along with plenty of stills and promotional imagery from the films. 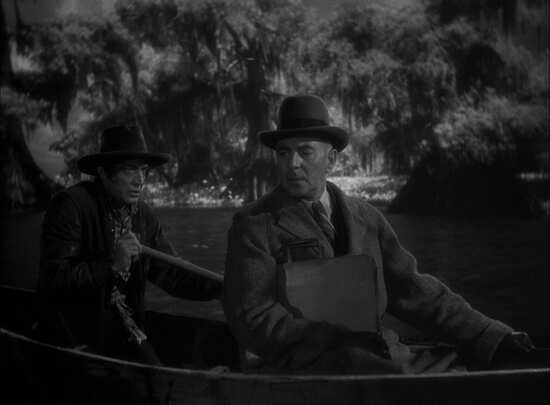 Introduction: The Cat and the Canary

It’s been ten years since the death of Cyrus Norman, and according to his will, his potential beneficiaries are to gather at his isolated house in the Louisiana bayou, where the contents of his will are to be disclosed. Six people show up, including actor Wally Campbell, and Joyce Norman. Along with the lawyer and the housekeeper, they are alone in the house to learn that Joyce Norman alone has inherited Cyrus’ wealth, with the stipulation that she should survive for a month without going insane, or the inheritance will pass to the second, as yet unnamed person in the will. That’s a recipe for murder, but luckily for Joyce, childhood friend Wally is determined to keep her safe. Unfortunately he’s a coward. And then a killer escapes from a nearby lunatic asylum... 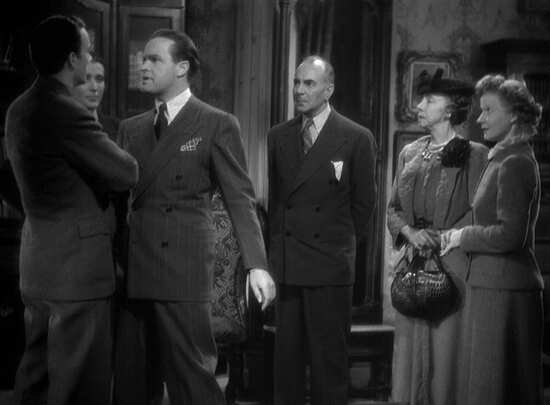 The Disc: The Cat and the Canary

The Cat and the Canary gets a 1.37:1 pillarboxed 1080p monochrome transfer, with PCM 2.0 mono English with optional SDH English subtitles. The image is clear, stable and sharp, free of print damage and signs of age. Detail levels are strong, and contrast is spot on, ensuring all the dark detail that you need in this spooky film is visible as it should be. I did notice a frame jump around 20 minutes, but that was the only nit I had to pick. The audio too is similarly well presented, the dialogue clear and audible, the sound rich and well balanced, and the spooky soundtrack setting the mood well. 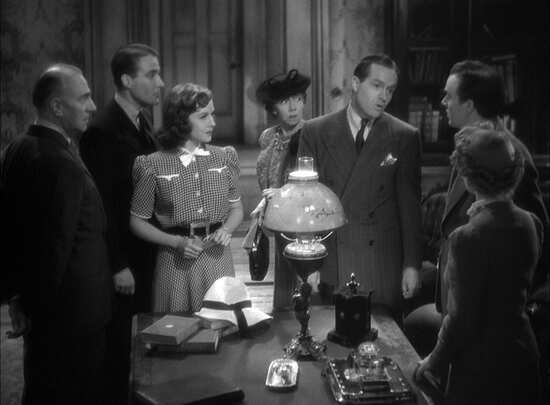 Extras: The Cat and the Canary

The main menu of the disc simply offers the two films which open submenus for that particular title. The Cat and the Canary offers the following extras. 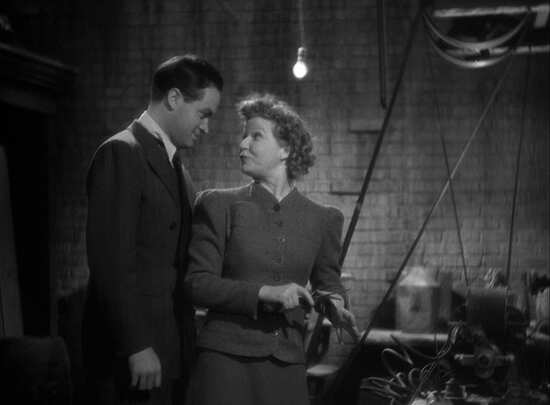 Conclusion: The Cat and the Canary

You think something is new, but it turns out that people have been doing it for ages. The Cat and the Canary is an example of meta-fiction made in 1939, and it makes the movie for me. Sticking a group of people in an Old Dark House and letting spooky things ensue is hardly something new, but stick Bob Hope into the mix, and it feels fresh and energetic. He’s known for the likable coward character, which works well in a situation where things are supposed to scare, and he has a wit and flow to his verbiage that feels like jazz. True, that is Bob Hope’s thing, but at the time, he’d only been in the film industry five years, and according to the Kim Newman interview, this was his breakthrough role. 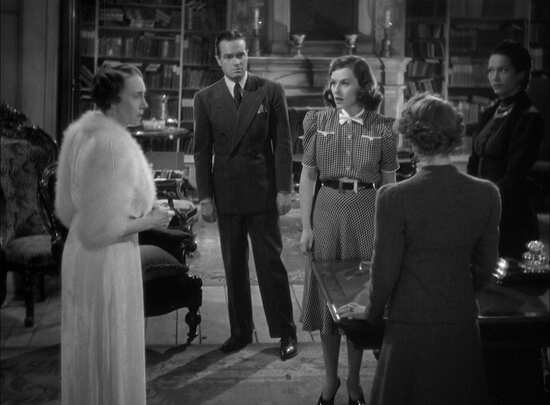 The whole setting of the film, the isolated house, the dark night, the creepy housekeeper and the creepy feeling sets the ominous mood. Then you throw in these eight characters, the tension of the will reading and the inheritance, and add an escaped murderer, and things don’t even have to go bump in the night for people to start screaming. Bob Hope’s nervous energy and self-deprecating cowardice is perfect, dealing with every tense situation with a witticism. 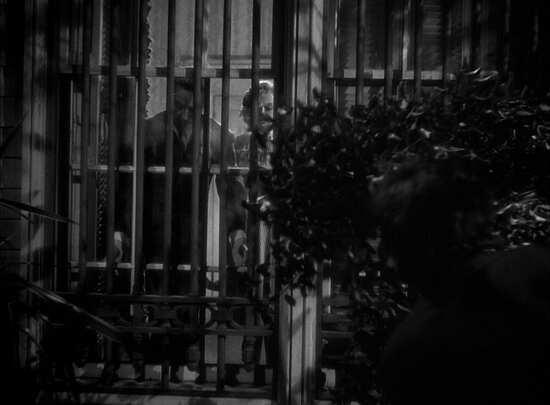 On top of that, Wally Campbell is an actor, which leads to him reacting to every development as if it’s a plot twist in a story, with him eager to pounce on any cliché or trope that pops up. The irony is that events seem to be unfolding just like a script, which at one point makes Wally a suspect in the situation. 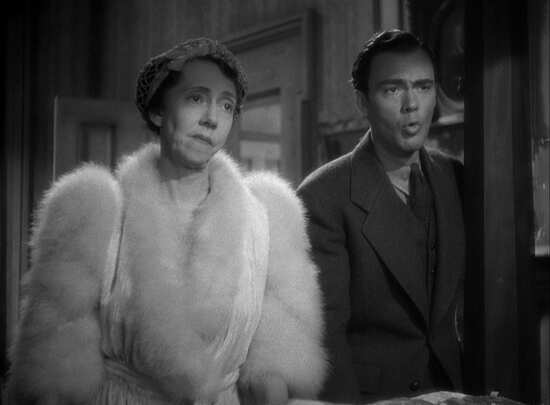 James Whale’s The Old Dark House came out in 1932. Seven years on, it feels like The Cat and the Canary is spoofing that genre, even though the actual Cat and Canary Story predates the James Whale movie by over a decade. I appreciated the James Whale movie when I watched it but I enjoyed The Cat and the Canary. It helps when one of the characters can’t take spooky situations seriously, as that mirrors my own incredulity when it comes to the genre. And Bob Hope actually looks young in this film, something I thought had never happened. 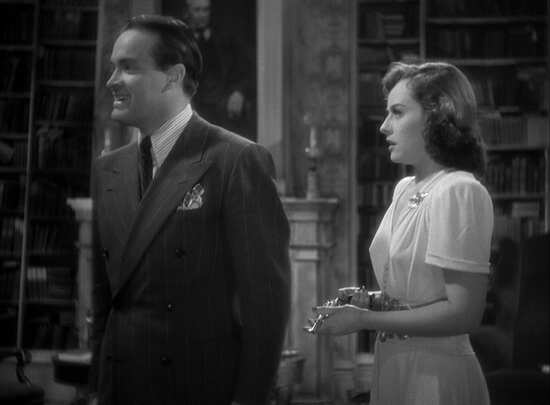 Mary Carter has just inherited a castle in Cuba, and is preparing to visit her new property. But before she can even leave New York, she faces a rather insistent dignitary who insists that she sell to him without even leaving the country. Then she gets a phone call from a mysterious man who warns her against selling, before being killed in the hotel lobby. 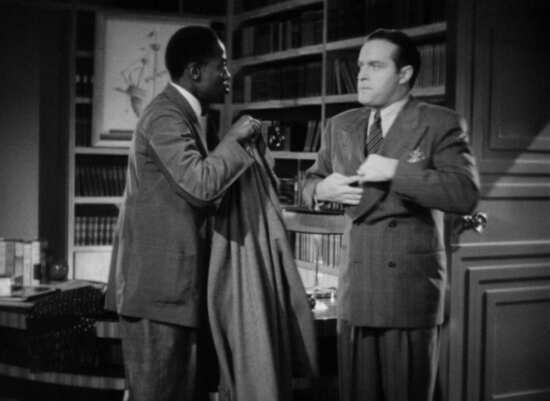 This is where radio host Larry Lawrence comes in, a jock who made his name on gossip about organised crime, but who has just annoyed the wrong crime boss, who happens to be in Mary’s hotel. Larry’s also there when the mysterious man is killed, and thinking that his gun fired the fatal shot, might find going to Cuba a good idea. So he and his faithful servant Alex shelter with Mary on the cruise down. But their troubles are just beginning, as the Cuban castle is reputed to be haunted, and there’s Voodoo afoot. 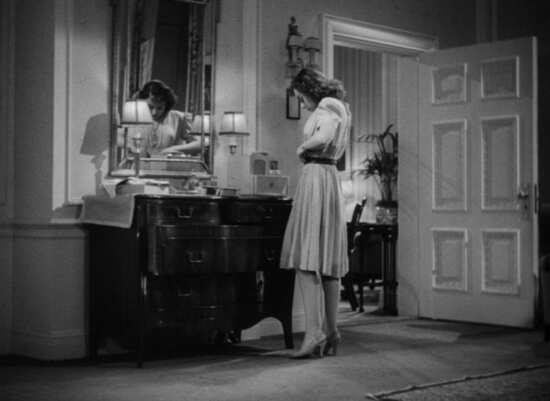 The Disc: The Ghost Breakers

The Ghost Breakers gets a 1.37:1 pillarboxed and monochrome 1080p transfer with PCM 2.0 Mono English audio and optional SDH English subtitles. The image is clear and mostly sharp, and once again the contrast is excellent, bringing across the film’s darker and spookier moments without issue. The audio too is enough to bring the dialogue and music across without distortion or signs of age. There are one or two moments of softness, but by and large the film is very watchable. 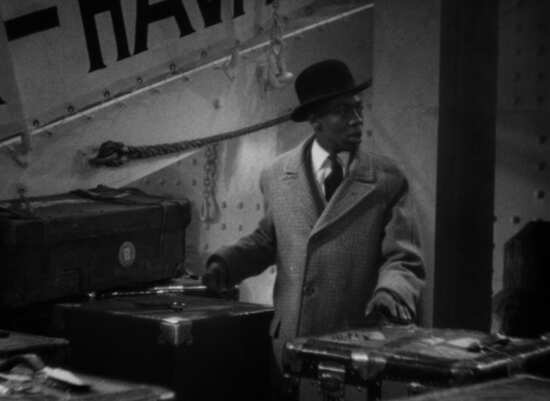 In the Ghost Breakers’ sub-menu, you get the following extras. 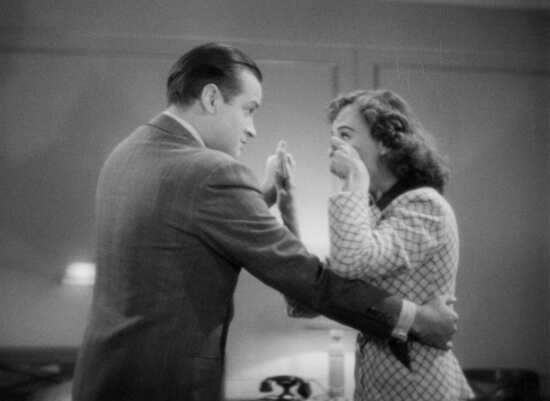 I enjoyed The Ghost Breakers more than The Cat and the Canary, at least for most of the duration. It’s in the same genre vein, a spooky mystery story, more of a horror comedy in tone, if not exactly in content. Although to its credit The Ghost Breakers does at least throw in some supernatural elements. The film has a light, entertaining tone to it, despite the ominous nature of its story, kicking off with a murder, of none other than Anthony Quinn, although thankfully for his screen time he does have a twin brother. The comedic nature of the film is of course carried by Bob Hope, but here he gets an excellent foil in the form of the servant character Alex. It is at first glance just another generic black servant role that doesn’t stand up to modern audience sensibilities, but the actor Willie Best manages to break out of the typical character tropes to deliver some choice one-liners. It feels like a two-hander with Bob Hope, even if Hope does have the bulk of the comic rejoinders. 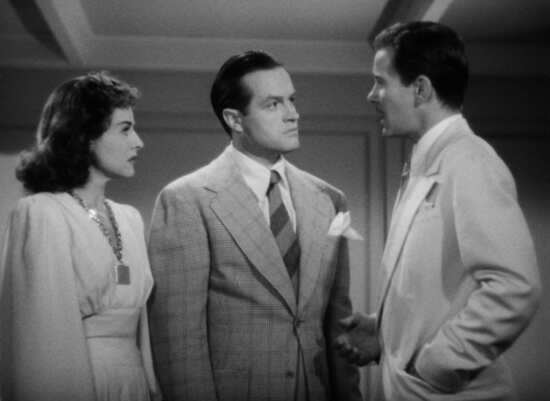 What also makes this film refreshing is that Bob Hope gets to do more than his usual wisecracking coward shtick with Lawrence Lawrence, the radio host. This is a character with more teeth to him. Sure, Larry is self-deprecating, and quick to admit his shortcomings and his fears, but he’s a proactive character rather than a reactive one, and he more than once chooses to venture into the lions’ den in this story, all for the attentions of the delectable Mary Carter. More hero than coward. 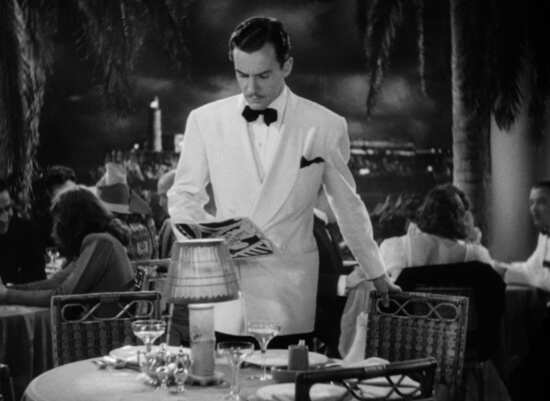 The film unfolds at a more measured pace than The Cat and Canary, which jumped straight to the ‘action’ at the mansion with the will-reading. The Ghost Breakers starts in New York, and introduces most of the main characters, developing them and the story. The inheritance is done and dusted before the film even begins, and it’s all about Mary getting to Cuba to claim what is due her, and dealing with all the mysteries and threats that start in New York before she even leaves on the ship. It’s not really until the final act that they get to the castle and start exploring its spooky mysteries. So there is plenty of room for character development. 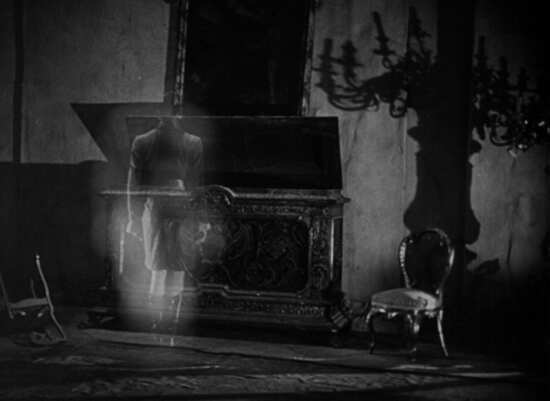 The only thing that lets the film down for me is the ending. It really does feel unearned, with the mystery antagonist unmasked in the final scene, and given a quick burst of exposition to explain their motivation. There just isn’t enough in the way of foreshadowing to make the ‘villain’ feel real for my liking, and it makes the end of the film more an afterthought to me. It’s a shame, as to that point, I really did enjoy The Ghost Breakers, certainly more than The Cat and the Canary. 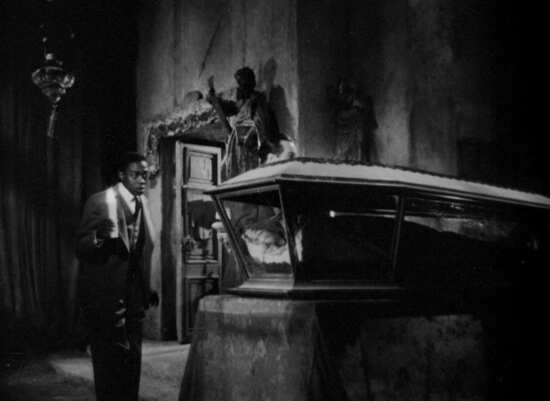 These are a couple of classic horror comedies where the spooky elements may not have held up too well, given what it takes to unnerve audiences these days. But the comedy does still hold up, with Bob Hope on fine form in these films, and still fresh-faced enough to look like he’s putting the work in. The two films fit on this single Blu-ray disc without issue, and have enough in the way of extra features to keep you busy for a while.