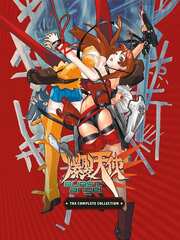 Warning: It hasn’t been that long since I reviewed the Is This a Zombie Blu-ray, but I’m starting again with the same notice. If you have the DVDs of Burst Angel and are double-dipping to upgrade, you have to keep the DVDs for the extra features that this Blu-ray is lacking. But on the other hand, this Blu-ray offers one extra feature that we originally missed out on. In other words, find a case that holds ten discs to hold onto the full Burst Angel experience in the UK. 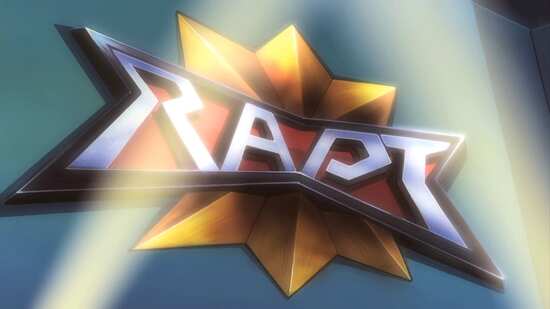 This autumn and winter, MVM are going back to four Gonzo classics and giving them the Blu-ray treatment. All four shows come from that period when anime was mostly being animated at 480 lines NTSC resolution, which means that the Blu-rays are going to be scaled up by default. Also, these shows are from relatively early in the BD scaled up anime cycle, when more post-processing, DNR and sharpening was being used than was healthy for anime. If we were in the US, it would be easy to say that holding onto the DVDs would be the obvious choice, but we’re in the UK, where the original DVDs were NTSC-PAL standards conversions, with a whole lot of ghosting and interpolation artefacts. I’d say that you’re pretty safe in opting for the Blu-rays at this point, as they would have to be spectacularly bad to be worse than original UK DVDs, but that has happened on a couple of occasions, which makes revisiting Burst Angel on Blu-ray worthwhile, just to check. 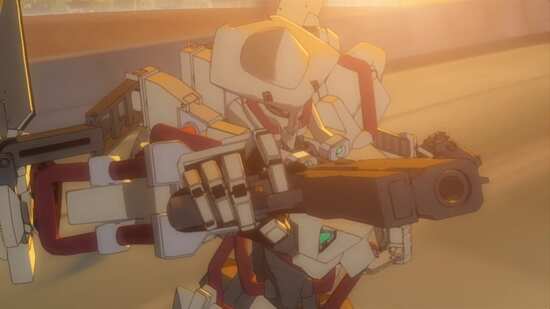 If you recall, Burst Angel is that cyberpunk, spaghetti western, Charlie's Angels mash-up. It’s one of those futures where society has fallen to pieces. In Tokyo, the ownership of guns has been made legal, and as a result crime rates have skyrocketed. Arrests however are down, as for the new RAPT (Recently Armed Police of Tokyo) it cuts down on paperwork when there isn’t a living prisoner to process. When just stepping outside your front door means taking your life in your hands, someone needs to do something. Fortunately there are four girls willing to do what is necessary to ensure peace for the citizens of Tokyo. Operating from a hi-tech trailer and receiving their instructions from the Bailan, Sei, Amy, Meg and the enigmatic Jo set forth, armed to the teeth and ready to battle the toughest of villains, aided by their trusty chef Kyohei. When it gets too tough, they can fall back on the services of the awesome Cybot Django, but there is more to Jo than meets the eye. She sports a strange tattoo that glows when she fights, and the rumour is that whoever sees it is destined for Hell. 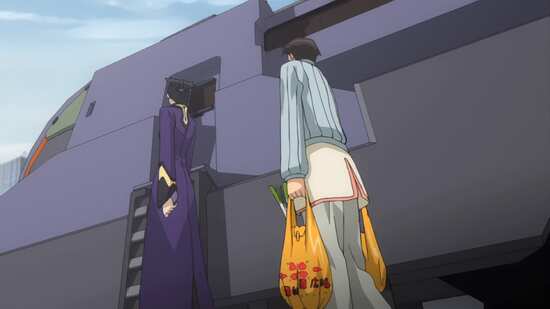 The episodes are presented across three Blu-rays from MVM as follows. 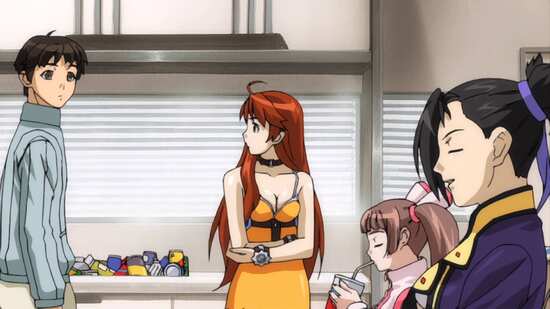 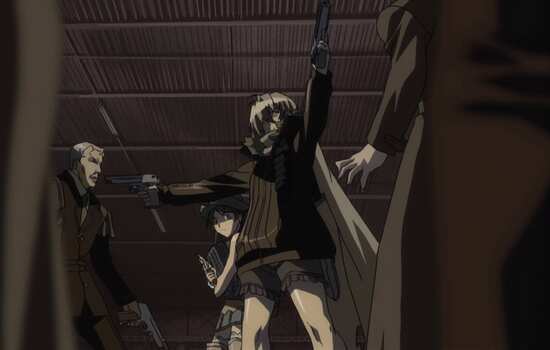 Note that while all the episodes play together, on disc 4, playback stops after Angels, Explode! and you’ll have to select Burst Angel Infinity separately from the episode menu. 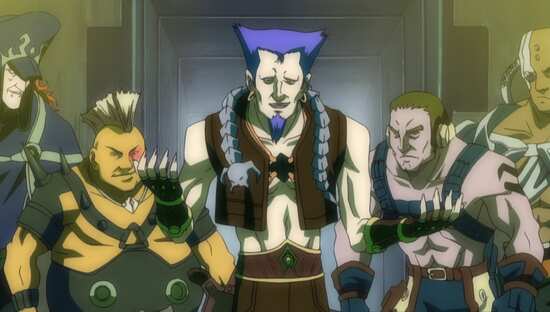 Burst Angel gets a 1.78:1widescreen 1080p transfer for all the main content. Most of the video extras are in SD format though. The image is clear and sharp, colours are rich and consistent, and vibrant enough to come from the source, rather than a DVD up-scale. The animation too is smooth and clear. But it is an up-scale, and there are signs of that apparent if you go looking, such as aliasing, and the rare jerky pan. There is some DNR, and some loss of finer detail in distant (smaller) objects on screen. Banding is apparent at times, and while the smearing associated with the worst of the QTec up-scales from this period isn’t apparent, the obvious sharpening of line detail and the flattening of some colours is. I have seen worse up-scales, and quite frankly, this release blows the old standards converted UK DVDs out of the water, making this release easy to recommend. Now if it was a comparison between this and the original US DVDs, that might be a finer distinction. 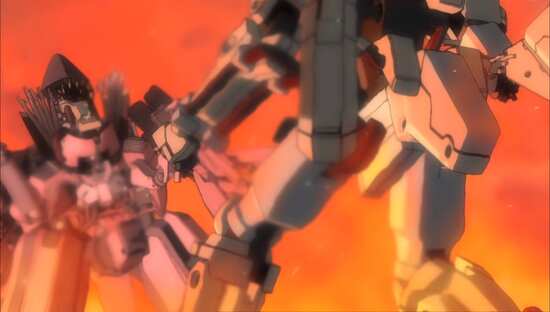 You get a choice of Dolby TrueHD 5.1 soundtracks in English and Japanese, and this release was mastered by Funimation back when you still had the choice of the signs translated or the translated English subtitles on Blu-rays, but it also means that thin white subtitle font that is harder to read against busy backgrounds. The Burst Angel audio experience is quite explosive, with plenty of action and some toe tapping tunes, along with some incidental music that owes a fair bit to Ennio Moriccone. The dialogue is clear throughout, and it’s an enjoyable experience on the whole.

I did notice towards end of episode 10, the subtitles drifted ahead of the dialogue. But that was the only nit I had to pick. 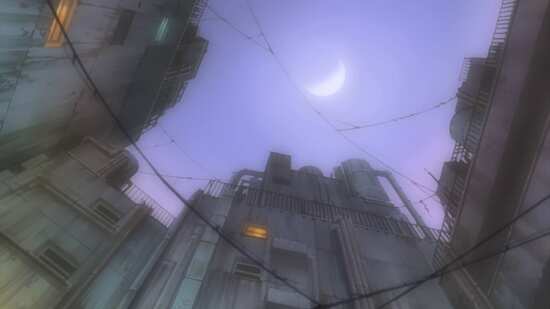 The discs present their contents with animated menus.

The first thing you should know is that this release omits many of the extras that came with the UK DVDs, no doubt because Funimation couldn’t or wouldn’t licence them again. The Bakuten Radio series is notably what’s missing. These bonus audio episodes were subtitled and presented against character art slideshows, and comprised the Japanese voice actors for Meg and Jo, Megumi Toyoguchi and Akeno Watanabe performing various skits, and having fun with the fans. There were several hours of material across the six volumes, and it’s a shame that these fun bonuses aren’t on the Blu-ray. 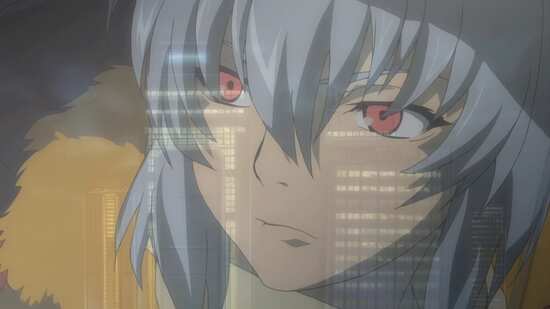 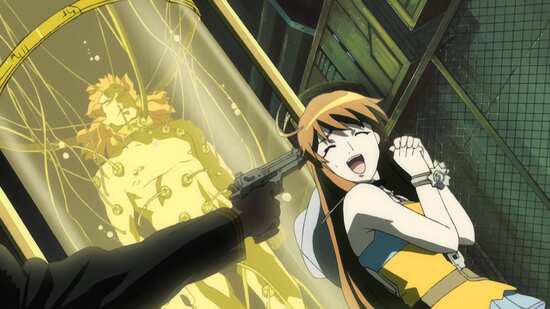 This is where the majority of extra features are, beginning with the Episode 24 Audio Commentary with Chris Bevins, Monica Rial, Alison Retzloff, Clarine Harp, and Jamie Marchi. 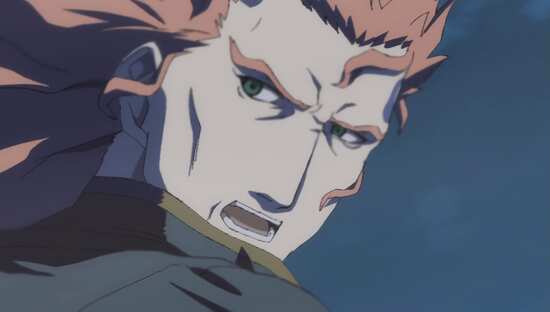 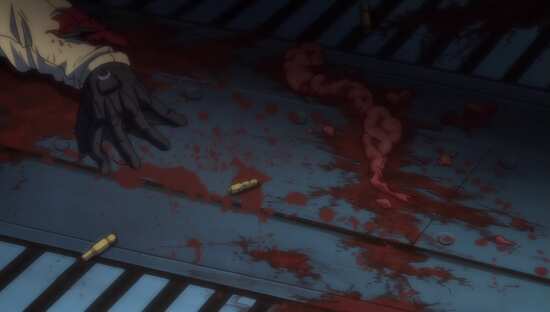 Burst Angel is an odd one from Studio Gonzo. They made a big splash with Kiddy Grade, a sci-fi, action, comedy, mystery cyberpunk mash-up, so much so that they used it for most of their subsequent shows with predictably diminishing returns (with the odd late stand-out). There were exceptions to the rule such as Welcome to the NHK, Basilisk, and Saki, but so many shows followed the Kiddy Grade template, it’s notable that all four Gonzo Blu-rays that MVM are releasing this year fit that bill. Yet Burst Angel comes early enough in that lifecycle, not too long after Kiddy Grade, that the template still feels fresh, and the creators have enough fuel in the tank to deliver something that feels different and original, even if it still conforms to the formula. 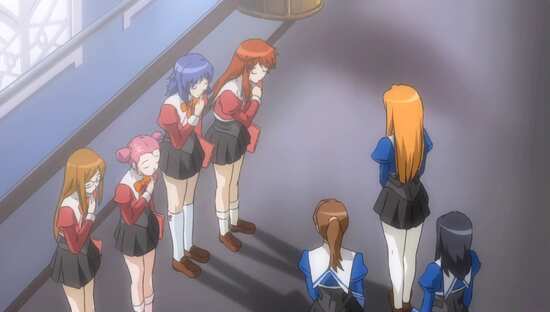 A big part of this is the way it throws Spaghetti Western influences into its cyberpunk-sci-fi-comedy-action mash-up. It gives the whole thing a style and energy that makes it feel more unique than it actually is. There’s also something to be said for the Charlie’s Angels set-up, with the four main characters, Jo, Meg, Sei, and Amy (with Kyohei as their occasional Bosley), going on missions, which makes them sometimes feel like a group against the world, which helps focus the narratives. It doesn’t hurt that the characters are well-written for a Gonzo show, and the interactions between them work well. 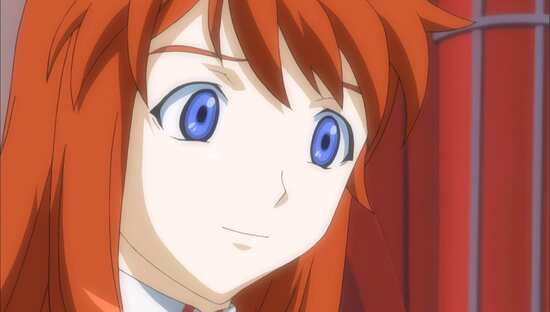 Of course the strong heart of the show is the platonic love between Jo and Meg, and as we learn as the show unfolds, Meg adores Jo as her saviour, but Jo needs Meg to hold onto the fleeting humanity she awakened when they first met. It’s a mutual dependence that goes beyond the simple fact that Meg is a serial hostage who Jo constantly has to rescue. One of the strongest ‘innovations’ that Gonzo applied to Burst Angel was to make most of the stories multi-part affairs. Most of the adventures are told over two episodes, with a cliff-hanger coming in-between, and there is a three-part story as well which all helps develop characters and narrative. It actually makes the odd single episode tales feel like an escape from the main story, especially when they throw in the obligatory swimsuit episode. 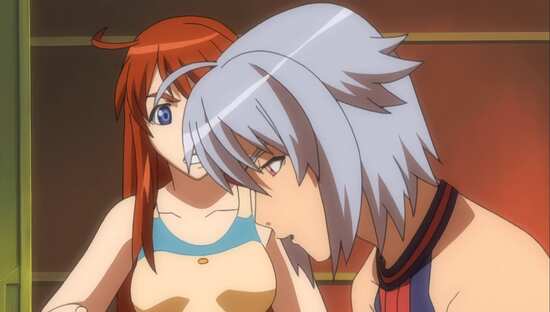 Burst Angel does a lot that is right when it comes to its style, its characters, and its world-building, enough so that it compensates for what would soon become the template storyline for these Gonzo shows. Jo has that dark past that will be revealed as the series unfolds, compounded here by making her an amnesiac. And there is a grand conspiracy behind it all, a plan for ‘world’ domination, although in this case the bad guy’s world extends to the city limits and no further. It all ties together, leading to the kind of ‘throw it all at the screen and see what sticks’ finale that has all the significant characters encountered during the run showing up to fight the villains. Thankfully, it’s not as egregious as the lengths that shows like Trinity Blood or Black Cat would go to, and Burst Angel manages to keep its story coherent for the most part. But there’s no denying that given all the intervening years of Gonzo conveyer belt shows, that Burst Angel’s story feels a lot more generic now than it did when I reviewed the DVDs. 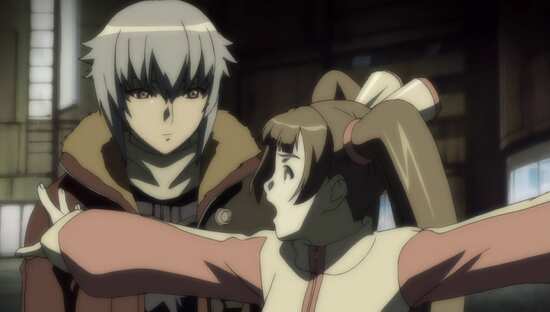 I think this is going to get tired pretty quick, given the quality of NTSC-PAL transfers we got back in the day, but in terms of A/V quality, upgrading Burst Angel to Blu-ray from the UK DVDs is a no-brainer. It is disappointing that we don’t get the Bakuten Radio shorts any more, and the extra audio commentary is no compensation for that. But even after all this time, Burst Angel is one of the better shows to come off the Gonzo identikit conveyer belt.