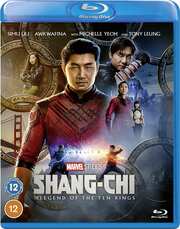 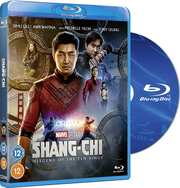 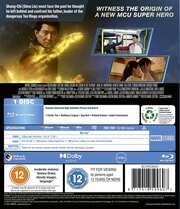 Review for Shang-Chi and the Legend of the Ten Rings

Just as with the rest of the MCU, I’ve been approaching Phase Four of the Marvel Cinematic Universe ass-backwards. I started off with the superlative Spider-Man No Way Home, and quite honestly, everything since then has been a relative disappointment. The second Doctor Strange movie didn’t live up to the promise of the first, while the belated stand-alone Black Widow movie would have felt superfluous to begin with, given Avengers: Endgame, but squandered the character further still with a goofy story. Still, this is all about setting up Phases 4, 5, and 6 of the MCU, laying the foundation of the so-called Multiverse Saga, and now that I come to Shang-Chi and the Legend of the Ten Rings, this is the first Phase Four movie I’ve seen that introduces a new hero, perhaps the first significant building block added to the MCU since Captain Marvel.

Shaun and Katy are best friends, working their dream jobs as valet drivers, despite Katy’s family thinking they should get jobs worthy of their educations, and perhaps thing about settling down. But they’re living the Ferris Bueller life, appreciating the small things, and getting to joyride in some of the finest cars. Then one day on the bus to work, Shaun’s attacked by a bunch of thugs led by a man with a sword where his hand should, looking to take his jade pendant. And Shaun unleashes some serious kung-fu to defeat the thugs, and save the passengers.

His secret is revealed. Shaun is really Shang-Chi; his mother was the guardian of a mystical village in another universe impinging on our own. His father Wenwu is a thousand year old warrior who is the head of the secret criminal Ten Rings organisation, rendered immortal and powerful thanks to ten mystical and otherworldly rings. And his estranged sister Xialing runs a secret kung-fu fight club in Macau. Shang-Chi’s mother was killed when he was a child, and his father raised him to be an assassin before he left it all behind. But Wenwu believes his wife is still alive and held captive in another realm. He needs the pendants to find that world, and he’ll reunite with his children, whether they want to or not. And to get his beloved wife back, he’ll destroy anything in his path.

Shang-Chi and the Legend of the Ten Rings gets a 2.39:1 widescreen 1080p transfer on this disc. You have the choice between DTS-HD MA 7.1 Surround English, Dolby Digital Plus 7.1 Surround French and German, Dolby Digital 2.0 Stereo English Audio Descriptive, with subtitles in these languages and Danish, Dutch, Finnish, Norwegian, and Swedish. At this point it’s rare to find a flaw in a mainstream release transferred to Blu-ray. The image is clear and sharp, with excellent detail and rich colours, while the audio is immersive and impactful as it should be. I’m left picking nits in the source material for something to write about, and once again it’s CGI and the abundance of green-screen; so many actors inside on a barren monochrome stage, pretending to be outside in the fresh air.

You get one disc in a BD Amaray style case, which boots to a slightly animated menu. On the disc you’ll find the following extras.

First of all, I have to make clear that I enjoyed Shang-Chi and the Legend of the Ten Rings a lot more than I expected. It’s well put together, action packed, with some engaging characters. It also had a higher hill to climb than most MCU movies, although it is doing that thing I enjoy where they blend genres, here it’s comic book and martial arts. But it’s not only competing with other comic book movies, it’s up against other cultural crossovers like Big Trouble in Little China, and Bulletproof Monk, as well as post modern Hong Kong and mainland Wuxia like Crouching Tiger and Hidden Dragon, Hero, and Dragon Tiger Gate. That’s a big hill to climb, and Shang-Chi manages it after a fashion. But this film also prodded my inner cynic like no other, and I have to rant.

Hollywood has a strange view of diversity in entertainment, something I noticed when I used to watch the Cosby Show for my sins. It’s all so segregated. Certainly we must recognise that Hollywood has embraced civil rights, and given everyone the opportunity (not that it really has), but when they make entertainment featuring ethnic groups, it’s those groups alone. It seems to leave Star Trek, and Gene Roddenberry’s view of the future alone, where everyone works together, celebrating each other’s cultures as the standard bearer for inclusivity, which after sixty years is sad. So this is the Asian, MCU movie.

Speaking of which, they only went and superficially remade Black Panther as Shang-Chi. Predominantly ethnic cast with a token white guy to keep the more intolerant fanboys onboard, Ben Kingsley here, Martin Freeman in Black Panther. Both films have hidden realms with high functioning ethnic societies. Both are stories about dysfunctional families, where a certain family member turns out to be the villain, with a justifiably vengeful cousin in Black Panther, misguided criminal father in Shang-Chi. And both films build towards a CGI heavy climax, where armies battle for the fate of the world. If you have a template, why not use it? As I said, my inner cynic ran rampant at this one.

Even then, I prefer Shang-Chi and the Legend of the Ten Rings to Black Panther. I have greater empathy for the personal and more relatable story; the characters are richer and more likeable, while I enjoyed the film’s sense of humour more too. Besides, it’s a kung-fu movie, which is an instant plus in my book, even if it isn’t the kung-fu I prefer for the most part. The film kicks off in full Crouching Tiger mode as we see how Wenwu met his wife. My interest piques when we meet Shang-chi, and he unleashes on the bus, in full-on Jackie Chan close-up inventive rumbling mode. That style of rough and ready kung fu continues for a while, until Shang-Chi discovers his legacy, trains up his powers, and straps on a wire-harness to become a wuxia master, and we’re back to Crouching Tiger mode. And then the finale happens, things go all CGI, and it’s no longer a kung-fu movie.

There are better kung-fu movies out there, but Shang-Chi is the best martial arts movie to come out of Hollywood. It may be working from a low bar, but it’s still worth saying. Were it a stand-alone movie it would be really quite forgettable, but it’s not. Shang-Chi introduces a new kind of hero to the Marvel Cinematic Universe, and new colour to its kaleidoscopic world. Even if this film doesn’t break any moulds, it does make me anticipate future appearances of this character in the MCU, as no other Phase Four movie, bar Spider-Man has done. The Blu-ray is on a par with the other MCU discs, so you have nothing to worry about there.