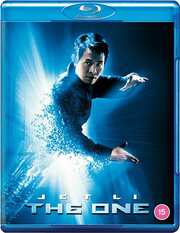 The One (Blu-ray Details) 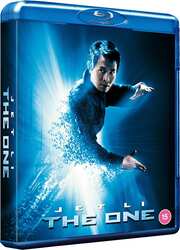 DVD
One, The (Special Edition) (US)

Blu-ray
Once Upon A Time In China Trilogy

Review for The One

2022 could be considered the year of the multiverse, given that the MCU multiverse story has gotten into swing with the second Doctor Strange movie, building on the previous Spider-man film. But more than that, there has been the acclaimed Everything Everywhere All At Once feature film with Michelle Yeoh, a film which is still inexplicably absent from the UK home video release schedules. But Michelle Yeoh isn’t the first Hong Kong action movie star to jump realities. Jet Li did it 20 years ago in The One, although given it’s taken 20 years to come to high definition, maybe I shouldn’t be so impatient when it comes to Everything Everywhere...

Yu-Law is wanted for killing himself. He’s actually done it 123 times. Yu-Law was a multi-verse agent who in the line of duty had to kill a version of him from another reality. That’s when he discovered that he gained in strength, speed and intelligence. He’s since gone on a killing spree across multiple realities, ending his parallel lives. If he does it enough, legend says that he will become The One, nigh on a god, either that or end all reality. And now, he needs to kill just one more person, his last doppelganger from ‘our’ universe, a cop named Gabe Law.

The One gets a 2.35:1 widescreen 1080p transfer with the choice between DTS-HD MA 5.1 Surround and 2.0 Stereo English, with optional English subtitles. The film gets a decent presentation on this disc, clear and sharp, with no sign of print damage or age. Contrast is good and that tells in the level of dark detail. Made in 2001, the film makes good use of colour timing to delineate the different realities. The action comes across well, with some serious kung-fu. The special effects are accomplished impressively given what feels like a lower than average budget for a summer blockbuster. The audio too is good, expressing the action well, using some immersive sound design, supported by a metal heavy music soundtrack. The dialogue is clear, although the origin of Statham’s accent not so much.

You get one disc in a BD Amaray style case, wrapped in an o-card slipcover. There is artwork on the inner sleeve as well. The disc boots to a static menu. The following extras are on the disc, and 88 Films have commissioned some new extras for this release, asterisked below.

The One is a multiverse, sci-fi kung-fu action movie, which is enticement enough for me to invest some time with this film, but what’s also interesting is that it comes from a couple of X-Files alumni, James Wong and Glen Morgan, who share writing and producing duties, with James Wong directing as well. They turned out a really effective action movie that builds on an exciting concept which had yet to be significantly mined back in 2001. The notion, with all the survivors levelling up following the demise of one of their alternate selves, allows for the use of bullet time special effects outside of a virtual reality as in The Matrix. It’s not quite as polished as in the Wachowski movies, but it works well enough in this film for the effects to hold the attention even now, 20 years down the line.

In this day and age of bloated two-hour plus movies, The One is an object lesson in efficient filmmaking. After an opening sequence info-dump explaining the multiverse concept in the film, we’re introduced to Yu-Law just two kills away from achieving his goals, and we see how he deals with his target before he’s captured by two agents who take him back to be sentenced. We learn just what the stakes are, and it establishes a prickly buddy-cop dynamic for the two agents, Roedecker and Funsch. Yu-Law escapes to go after his final target and the two agents follow him.

That’s when we meet Gabe Law, a mild-mannered, happily mannered cop who has been inexplicably getting stronger and faster for the last couple of years. The reason why becomes obvious when Yu-Law appears to try and kill him, and the battle commences, Jet Li vs. Jet Li. There are complications of course, with Gabe now having the same face as a wanted criminal, and with Roedecker and Funsch faced with either recapturing Yu-Law, or having to kill both Yu-Law and Gabe to prevent the end of the universe, should one of them become The One. If you give it too much thought, the plot really doesn’t make much sense, but the film is fast paced enough, the action so brilliantly accomplished (both of Jet-Li’s characters use different styles of kung-fu), that I just didn’t care about the film’s narrative shortcomings.

...At least not until the end of the film. Gabe’s story ends on a cute and positive note sure enough, but when it comes to the emotional truth of the characters, it doesn’t work, at least not for me. However, the film ends with a kick-ass scene with Yu-Law that is just so bad-ass that I wish The One had gotten a sequel. The film looks so good in high definition, that you can see the weaknesses in some of the effects now, but it is still highly watchable. 88 Films also give the film a decent collection of extra features. It’s well worth picking up if you want some classic pop-corn action.