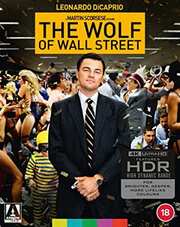 Few filmmakers depict greed and amorality on screen like Martin Scorsese. Thrilling, glamourous, seductive: his unflinching eye sees all and refuses to look away. Nominated for five Academy Awards including Best Picture, Best Director, and Best Actor, The Wolf of Wall Street is a monstrous masterpiece, equal parts hilarious and horrifying.

Leonardo DiCaprio is on dazzling form in the frenetic true life tale of New York stock-broker Jordan Belfort and his rise from boiler room brokerage firm to a decadent life of obscene wealth, stratospheric drug-use, and rampant corruption. Spiralling out of control as government investigators close in, Belfort’s fall is as spectacular as his meteoric rise.

Arrow Video is proud to present a director-approved 4K transfer (making its UK premiere) of this extraordinary ode to American excess, in a special edition as sleek and sharp as the Wolf himself.