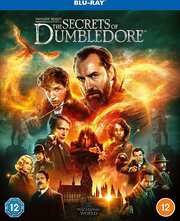 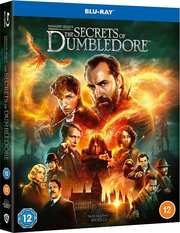 Blu-ray
Fantastic Beasts and Where To Find Them

Review for Fantastic Beasts: The Secrets of Dumbledore

Could Harry Potter be ‘cancelled’ in the modern, social media sense of the word? Could the target audience be so influenced by gossip, and the cultural direction of travel that the franchise falls out of favour? Certainly the third film in the Fantastic Beasts franchise has had more than its fair share of bad luck in this respect. The biggest elephant in the room is Harry Potter author, and Fantastic Beasts creator and screenwriter herself, J.K. Rowling, who in recent years has espoused opinions that the social media ‘intelligentsia’ can’t countenance. Actually they can’t countenance anyone having an opinion differing from their so called mainstream view, and the minute anyone steps out of line, they collectively scream ‘cancel’, whether justified or not.

In the film prior to this, The Crimes of Grindelwald, Johnny Depp was cast in the title role, Gellert Grindelwald. Subsequently he had a very public, messy and acrimonious court battle with his ex-wife, and allegations and accusations flew. It was a UK court battle that he lost, so he was ‘cancelled’ out of the sequel, the role recast with Mads Mikkelsen (subsequently Depp won a similar court case in the US, although I doubt he’ll be back for the next movie; people are never ‘un-cancelled’). The straw that might eventually break the camel’s back is actor Ezra Miller, who seemingly keeps getting arrested for public order offenses. Although ultimately that might not be an issue seeing how this film pans out. But I have to say that the Harry Potter brand has picked up a tarnish in recent years, one that doesn’t seem to be fading anytime soon. It’s momentum, and a compulsion to complete the story that got me picking up the third Fantastic Beasts movie on Blu-ray this week, not enthusiasm, especially after The Crimes of Grindelwald. I hope this film proves my apathy unwarranted.

At the end of The Crimes of Grindelwald, Gellert Grindelwald was a fugitive from the Wizarding authorities. But in a time of great changes, that’s easily overturned. The next leader is to be chosen, and Grindelwald has enough influence to have the charges against him dropped. Exonerated, he even has plans to stand to become the next leader, a practical certainty given the Fantastic Beast that he has just acquired.

Newt Scamander and his friends, with the help of Albus Dumbledore move to act against Grindelwald, but they may not be enough, especially given Dumbledore’s past association with Grindelwald binding him from acting directly. But this time, the muggle baker Jacob Kowalski has a wand.

The Secrets of Dumbledore gets a 2.40:1 widescreen 1080p transfer on this disc, with audio in Dolby Atmos and DD 5.1 Surround English, DTS-HD MA 5.1 Surround Italian, and Dolby Digital 5.1 Surround English Audio Descriptive, and Spanish, with subtitles in these languages and Danish, Finnish, Norwegian, and Swedish. Once again, there are no nits to pick with the transfer, a flawless image coupled with excellent and immersive surround audio. Detail levels are top notch, with the action looking as good as it sounds. But this is a film full of Fantastic Beasts, which means a whole lot of CGI, not just for the unearthly critters, but also for a lot of the backgrounds and settings, not helped by a sepia colour timing for the whole film, reminding us that it is set in the past.

You get one disc in a BD Amaray style case, wrapped in an o-card slipcover that repeats the cover art. The disc boots to a static menu. On the disc you’ll find the following extras.

So now the question is whether to keep on riding the Fantastic Beasts train to the end, or get out while the getting is dull. I have this compulsion to keep on going with franchises and entertainment properties long after the sell-by dates. It’s why I wound up with films like Robocop 3 in my collection, Star Trek Nemesis and Star Trek Voyager on my shelves. It’s why the latter half of the Star Wars Expanded Universe literature I bought is really naff. I just don’t know when to quit. I’m really questioning my choices now that I’ve seen Fantastic Beasts: The Secrets of Dumbledore, the third film in a projected five film series. It’s really not very good.

It is a crying shame though, as the franchise really kicked off on a high note with the first film, Fantastic Beasts and Where to Find Them, which took a new approach to the Harry Potter universe, by taking it out of the school setting, setting it in the past, and making the protagonists of adult age. It hinted at a more mature story, while a historical setting very much enriched the universe, revealing elements of back-story hinted at in the Harry Potter movies, in very interesting detail. It was a good story, and even better set-up for what would hopefully come.

But then came Crimes of Grindelwald, which was bloated, meandering, and mediocre. To me it felt like the middle of a story, rather than anything with a satisfactory narrative flow. And now we have The Secrets of Dumbledore, which is even more of a disappointment. It is a film with a decent conclusion, but that’s the last 20 minutes of a 2 hour 20 minute film, which doesn’t bode well. It’s a quest movie, a whole lot of A-B manoeuvring, a lot of pieces being moved around a cinematic chessboard by both sides, good guys and bad guys trying to pull off their respective plans.

What’s missing in all of this for me is character. I didn’t invest in the film at all, with only Jacob Kowalski making an impression in the film. I have to say that for me Mads Mikkelsen was too bland as Grindelwald, and recasting Depp was probably a mistake. I’m also rather non-plussed by how forgettable the Newt Scamander character is; someone who should be at the heart of the franchise. In the previous films, the chemistry between the character and potential love interest Tina Goldstein counted for much, but in this film Tina is absent for much of the runtime, with the sense that the actor just didn’t want to sign on the dotted line for this film. She’s better off out of it.

JK Rowling is more intent on filling in pieces of back-story (particularly Dumbledore’s) and piling on the magi-babble than creating characters that this particular audience member can care about. One interesting thing about the way this film concludes is that it ties up almost every loose end from the previous two films, except for Gellert Grindelwald, who like a cartoon villain gets away at the end, swearing revenge like Dr Claw does to Inspector Gadget at the end of each episode. Should there be no more Fantastic Beasts movies, it is possible to draw the line under the film and call the story done. If Warners winds up using that particular escape hatch, I won’t be overly surprised.