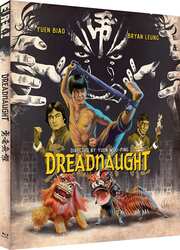 A violent criminal known only as ‘White Tiger’ (Yuen Shun-yee; Iron Monkey) is hiding amongst a theatre troupe, murdering anyone who discovers his identity (as well as anyone who happens to annoy him). Mousy, a timid laundry man (Yuen Biao; Project A), crosses paths with White Tiger several times but always manages to escape. When the killer instead targets his friend (Bryan “Beardy” Leung; Warriors Two), Mousy must overcome his cowardly nature and acquire the skills necessary to defeat the White Tiger.

Notable for being the final film in which Kwan Tak-hing portrayed folk hero Wong Fei-hung (and, oddly enough, for its famous laundry scene being directly referenced in Batman Forever), Dreadnaught is a cult favourite amongst martial arts fans, and Eureka Classics is proud to present the film in its UK debut on Blu-ray from a brand new 2K restoration!