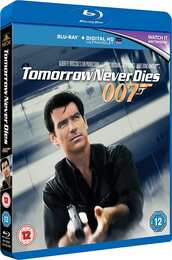 You wouldn’t believe that this is a key title for me, when it comes to my home cinema collection, given that I always thought of it as one of the lesser Bonds, and never actually owned it until now. But back in the late nineties, when VHS was still king for me, I actually bought a PC with a DVD-ROM drive in it, which remained unused for that purpose for several years. Software still came on CD back then, and it took a good few years for PC Magazine to start sticking DVDs full of demo software on the covers once bloat caught up. Around that time, I was also buying movie magazines, although I didn’t pay attention to the DVD Sampler Disc I got with Total Film back in 1999, as it didn’t work on my PC.

Put together by the major studios and tech manufacturers, it was meant to sell this new DVD technology to the masses, and it was only when I upgraded my PC’s graphics card and got some free DVD playback software with it that I could finally see what was on the disc. It was a guide to all of the interactive goodies, like multiple angles, extras, anamorphic widescreen and surround audio, and it had clips from around 20 films. Not that it looked all that great on a 17” CRT monitor, but I recall being impressed by the motorbike chase scene from Tomorrow Never Dies to the point where a couple of weeks later, I was plugging a Sony DVD Player into my TV’s SCART socket. The rest is history... But as I said, Tomorrow Never Dies was never a movie that found a home in my collection until now, when I finally went all Pokemon collecting the James Bond movies.

There’s trouble brewing in the South China Sea, with a British warship on patrol apparently sunk by Chinese MIGs for allegedly straying into Chinese territorial waters. That shouldn’t be possible, given the security of GPS navigation, but it seems that someone actually hacked the system, and given that the signal came from a Carver Media Group satellite, James Bond is assigned to investigate the flamboyant news man; that, and the fact his news service was running the story almost before the local authorities had ascertained the details. James Bond has an in, he previously had a relationship with Elliot Carver’s wife Paris, but when it becomes clear that Carver wants to make the news rather than just report it, time runs out. And it’s all complicated by the Chinese agent on the case, Wai Lin. Bond and Wai Lin will have to work together to save the day.

Tomorrow Never Dies gets a 2.35:1 widescreen 1080p transfer with the choice between DTS-HD MA 5.1 Surround English, DTS 5.1 Surround French and German, and DD 5.1 Surround Spanish and Portuguese, with subtitles in these languages, and Danish, Dutch, Finnish, Norwegian, and Swedish. With such a recent film (it’s only 24 years old!), there is less in the way of issues with the transfer, a clean and sharp presentation with rich and consistent colours. There’s been no significant post-processing to make it HD ready, although grain isn’t too prevalent. The action sequences come across well, the effects are decent, aside from one rather goofy moment. The audio works well, a nice immersive surround track that brings the action across to impress, while keeping the dialogue clear. David Arnold takes over from Eric Serra when it comes to the film’s music, and with a little input from Moby, the Bond theme gets a proper airing, after the anaemic music of GoldenEye.

You get one disc in a BD Amaray with a UV Code. The disc boots to an animated menu. The extras are all taken from the DVD releases of the film, and are presented in SD format almost exclusively.

There are 15 categories of gallery in Image Database.

I’ve softened on Tomorrow Never Dies over the years, to the point where I actually prefer it to GoldenEye. It is a fine distinction given how I feel about the Brosnan era of Bond movies, but it is a change nevertheless. The movie certainly hasn’t changed though, and all those problems that pushed it so low in my estimation to begin with are still there. It’s just that with the passage of time, they don’t sit as strongly, and it’s more apparent that Tomorrow Never Dies is a fun filled, action packed romp, which delivers what it promises, two hours of light entertainment.

Those problems though. Once again I have to express my disappointment that the Brosnan movies were really just Roger Moore movies but with updated effects and a more modern filmmaking style. The dialogue approaches pure Carry On at times, which can throw me from the film with a violence that exceeds anything you’ll see screen. But the real, fundamental problems with the film are its story, and its villain.

Let’s face it, the press is an easy target, even more so now than it was in 1997, with a political element to reportage, a narrative that publishers promote that can more influence media consumers than inform. There is plenty of material for satire there, satire with more bite and anger than the tepid story offered by this film. Sure the connections can be, and are made between Elliot Carver and Rupert Murdoch, and the film also throws in a Robert Maxwell reference for good measure. But there is such an obvious flaw in the villain’s master-plan that it knocks the whole plot for six. Elliot Carver wants to instigate a massive war for the headlines, to sell more papers, beam his news channels into more countries. The fact that he’ll be killing his potential customers doesn’t seem to faze him.

I also have to say that I just didn’t care for the portrayal of Elliot Carver. That there has always been a camp element to the villains in Bond movies is undeniable, but Carver is so unthreatening, yet so obviously villainous that it makes him hard to take seriously. The Nehru collars and his unique typing style, his verbal pomposity all seems to be played deliberately for laughs, rather than to convey any sense of menace.

Still, maybe it’s because of the whole tensions with China plot direction that Tomorrow Never Dies feels more topical now, and made in 1997, it precedes that era when Hollywood movies were actively courting a Chinese market. It makes the story feel a little more natural, the characters unforced. And two movies before they tried to make Jinx a thing, a potential Bond secret agent spin-off franchise with Halle Berry, Tomorrow Never Dies serves up a far more plausible and effective female secret agent in Wai Lin, who has the kung fu skills and the force of personality to more than match James Bond. The more overt sexuality of the Bond movies is toned down in this film, which makes the teaming up of Wai Lin and Bond more a meeting of minds, a much more intellectual flirtation that actually serves the film well.

The fun aspects of Tomorrow Never Dies now outweigh the inanities of its plot and villain to the degree that I actually enjoyed watching the film again. I didn’t even mind its heightened reliance on gadgetry (although Bond’s multitasking mobile phone now seems woefully underspecced). The Blu-ray presentation is solid and offers plenty of re-watch value.