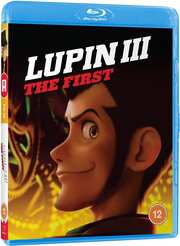 DVD
Lupin The Third: The Secret Of Mamo

Blu-ray
Lupin the 3rd: The Woman Called Fujiko Mine

Review for Lupin III: The First

The Lupin franchise has really only recently got a firm foothold in the West. That is a comparative statement, given that the franchise has been ongoing for well over 50 years at this point, although the creator, Monkey Punch passed away in 2019. The whole thing is down to copyright, given that Monkey Punch’s title character, Lupin III is presented as the grandson of master thief Arsène Lupin, creation of author Maurice LeBlanc. For years, the early iterations of Lupin III had to be marketed in the West as Rupan (the Japanese pronunciation) or the literal translation, Wolf. They had to be creative to be able to market the franchise without infringing the original copyright. Thankfully for this feature film adventure, the Arsène Lupin franchise fell out of copyright, removing that particular impediment. Given that this film explicitly references Maurice LeBlanc’s gentleman thief, there’s no way it could have been released in the West previously.

During World War II, the Nazis expressed an interest in the work of archaeologist Bresson, and naturally they were emphatic about possessing his secrets. He took his notebook and locked it away in a fascinating contraption, giving it to his daughter to hide. It didn’t end well for the Bresson family, although the book went missing.

Years later after the war, the museum in Paris is holding a Bresson exhibition, where the Bresson diary will be the star exhibit. Naturally it attracts the attention of criminals, as well as a certain Interpol detective who’s using it as bait in a trap. That Lupin III and Fujiko Mine are competing to steal the diary is no surprise, but there’s a new player on the block as well, a young woman named Laetitia, who wants the diary for her grandfather, Professor Lambert. The archaeologist’s journal holds the secret to ultimate power, something that certain survivors of the Third Reich would very much like, but it turns out that this mystery stretches even further back, as the key to opening the Bresson Diary are held in the legacies of Laetitia’s grandfather, and Lupin III’s grandfather as well.

All the Anime simply rework GKids’ disc for Region B, and in this case it’s a good thing. The film gets a 2.39:1 widescreen 1080p transfer, and you have the choice between DTS-HD MA 5.1 Surround English and Japanese, as well as Dolby Digital 5.1 Surround English Audio Descriptive. You have Hard of Hearing as well as translated English subtitles as well as Spanish and French subtitles. It’s an impeccable transfer, clear and sharp with great colours and excellent detail, bringing the imaginative world design and fluid animation across without flaw. The audio matches that quality, giving us an immersive action environment, with great placement of effects, driven by a delightful jazzy soundtrack. The dialogue is clear throughout (Japanese as always), and the subtitles are free of typos and accurately timed. About the only notable nitpick might be the burnt in captions translating on screen text. This rarely happens though.

Usually you have to go for All the Anime’s Collector’s and Ultimate Editions, as the extra value is usually in the physical extras, and certainly you do get more if you go for Lupin III: The First’s Collector’s Edition. But this Standard Edition that I bought is actually brimming with extras.

You get one disc in a BD Amaray case, the sleeve is reversible and the disc boots to an animated menu. Having logos and BBFC ratings on the reverse side of the sleeve is a bit of a missed opportunity for some clean artwork.

The extras on the disc are as follows...

This could have gone either way, both in terms of visuals and in terms of story. The First could have been as esoteric as The Secret of Mamo, a film so psychedelic that imbibing certain substances is a good idea before watching it. At the same time, this film is such a radical departure from the original franchise, taking the characters and the world into 3D CGI, that it could have fallen completely flat. Anime hasn’t the greatest track record when it comes to 3D CGI, with examples like Berserk and the most recent Ghost in the Shell Stand Alone Complex series notable as aesthetically unpleasing. But Lupin III: The First gets it all right, a great, entertaining action adventure that proceeds with a great pace, and delivers the last thing I was expecting at this point; an Indiana Jones movie!

The jump to 3D CG is initially jarring to be honest, but it doesn’t take long for it to become part of the background. Five minutes in and I was just enjoying the film. The character designs work really well in 3D, are recognisable as the classic characters, but have a degree of emotional range and character focused motion that you’d never see in 2D. Given the level of detail in the backgrounds and props, approaching photorealism at times, there are times where this film feels live action, which is unsurprising given that making this in live action was apparently an option at an early stage.

The First borrows heavily from Indiana Jones and the Last Crusade. It may be set in the sixties, but the Nazis are still the bad guys, and the film even makes use of that old conspiracy theory that Hitler survived the fall of Berlin, and escaped with a whole phalanx of Nazis to South America. The race is on to find the secret of ultimate power in the ruins of a lost civilisation, the clues are hidden in a diary, and the ultimate goal is hidden behind three deadly tests. That bit in Last Crusade where Indy throws sand to reveal an invisible bridge... there could be grounds for copyright here, which given my opening paragraph might be apropos, but then again, Lupin III is a master thief.

This is still a Lupin movie, even if it is built on the bones of another franchise. Lupin is a lecherous rascal, and in wannabe thief Laetitia he gets a new potential romantic interest, although we all know his destined true love is Fujiko Mine. The two criminals continue their playful rivalry trying to steal the Bresson Diary, although Fujiko’s been hired to steal it for someone else. And then there is Inspector Zenigata, still fervently pursuing Lupin to the exclusion of all other priorities. He’s certainly not incompetent in his pursuit, but luckily Lupin has the aid of the sharpshooting and gruff talking Jigen, and the aloof samurai Goemon. It’s an abrasive set of friendships as always, but they all seem to be heading in the same direction, and once the true villains of the piece are revealed, they briefly find common cause.

The characters are delightful as always, the story is gripping, and making the Nazis the villains is an easy win when it comes to grabbing an audience. The action is excellent, the comedy hits the right notes, and the film knows when it needs to take a breath for an emotional beat. This Lupin movie is the best Lupin I have seen so far, and frankly you should watch it even if you don’t like anime, and have never seen Lupin before. The film works perfectly as a standalone, and this is the best implementation of 3D CGI I have seen from Japan, more than matching modern Hollywood animation for quality.