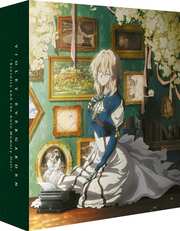 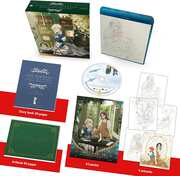 How quickly can you forget? I watched the Violet Evergarden series just three months ago, and already it had slipped my mind just how emotionally affecting this story really is. Those episodes put me through a veritable emotional wringer, yet when I put the movie disc into the player last night, I had forgotten all that, and was simply expecting some more KyoAni goodness from the first feature film spin off in the franchise. Yup, tears were welling up again by the end credits...

Violet Evergarden was an orphan, raised to be a soldier in her nation’s great war. As the war came to an end, she was maimed, losing her arms, and losing the one person she trusted in the process. She got prosthetics to replace her arms, but finding a purpose took a while longer. She eventually became an Auto Memory Doll, a scribe helping people communicate their emotions in the form of letters. It was a job that helped her get in touch with her own emotions as well.

The first feature film spin-off comprises two loosely connected stories. First, Violet Evergarden is assigned to a private, elite school that prepares the daughters of the aristocracy for the world. She’s been hired by the Drossel royal family to prepare one of the students for her debutante ball. But Isabella York isn’t the typical child of the elites; she’s withdrawn and antisocial, and doesn’t welcome this new disruption in her isolation. But it turns that wealthy heiress Isabella York and orphan turned soldier Violet Evergarden have much in common.

The second story sees Violet keeping a promise to a young orphan named Taylor Bartlett, a little girl who one day shows up at the post office, with an ambition to become a postman. For Taylor has a very important letter to deliver.

Eternity and the Auto Memory Doll gets a 2.35:1 widescreen 1080p presentation on this disc. Yes, this is one of those rare anime movies that get a scope presentation (I can think of Tekkonkinkreet as another example). It’s a great transfer of a high quality animation. The image is clear and sharp, and very well detailed. About the only nit to pick might be the lightest of light digital banding. The animation is fluid and very well accomplished, while the European style world design harks back to Ghibli films like Kiki’s Delivery Service when it comes to stylish and evocative imagery. The film has that same occasional hazy feel that the TV series has, so that confirms it as a creative choice.

You have the choice between Dolby TrueHD 5.1 Surround English and Japanese with optional translated English subtitles and signs. The surround really makes for a nice, immersive experience, making the most of the film’s sound design, and making you wonder how the series would have sounded with a similarly enveloping audio presentation. The Japanese dialogue is clear throughout, and the subtitles are accurately timed and free of typos. The film’s music is really quite wonderful and atmospheric, and drives the story well.

The Violet Evergarden series went on quite the journey on its way to home video release in the UK, but for the Eternity and Auto Memory Doll movie, things are far more prosaic, with All the Anime simply using the US Funimation disc, mastered as Region B for the UK release.

You get one disc in a BD Amaray with a reversible sleeve, and the disc boots to an animated menu after autoplaying a trailer for Kono Oto Tomare!

The sole extras on the disc are trailers for Eternity and the Auto Memory Doll.

This time the goodness comes in the accoutrements with the disc. For the Amaray case comes in a thick card slipcase with some really gorgeous artwork on it. The blurb sheet (with its spec errors) is held in place by the cellophane, and can be kept inside the case once it’s removed.

There is a poster folded up in the case.

There are five artcards, four with pencil sketch artwork to appreciate.

There is a short story, Amy Bartlett and the Spring Sunshine Filtering Through Foliage by Kana Akatsuki presented in a 28-page booklet.

Finally there is the Violet Evergarden – Eternity and the Auto Memory Doll booklet. This offers 80 pages of character guides (with four voice actor interviews), an interview with film and series composer Evan Call, costume art with commentary, settings art, an essay on the world design with an emphasis on elite schools, and lastly storyboards with commentary. 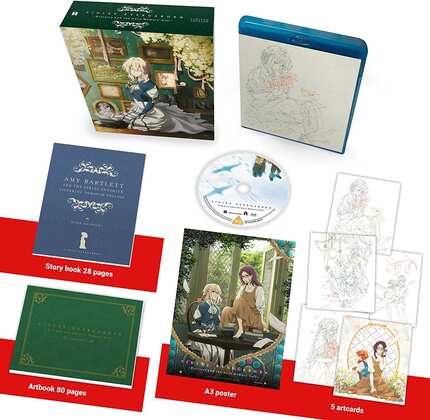 Eternity and the Auto Memory Doll is described as a side-story to Violet Evergarden, and what you get here could so easily have been implemented as four television episodes, two episodes per story arc. Indeed, it seems this was the original intention before the project got upgraded to the theatrical feature film format. Given the two stories here are connected, and the themes across them are constant, it’s easy to see them work in this feature film context, and that also gave the creators the opportunity to up their game when it comes to production value. This film looks amazing, and it accomplishes what the series was so adept at, making the audience cry.

The first story arc is the more emotionally weighty, with Violet Evergarden assigned to make an heiress ready for her debutante ball. It seems like she’s venturing into the world of the rich and elite, but Isabella York is far from your typical heiress. She’s an anti-social girl, practically a shut-in with her tendency to shelter in her room, and she’s not of a mind to debut at a ball or anywhere else. Her initial reaction to Violet is hostile, but Violet has her duty, and she’ll take all the three months that she has to break down Isabella’s defences. It doesn’t take three months though. Isabella thinks that Violet is a pampered servant to the elites, a glorified nanny, but is disabused of that notion when she sees Violet’s prosthetic arms.

Gradually, the truth about Isabella’s past comes out, and Violet learns that she has much in common with her charge. Isabella York wasn’t always Isabella York. In another life she was a street rat, scraping together a living, all to take care of her adopted sister, a girl she found homeless in the snow, and who she took in to have someone other than herself to care for. Their lives were grim, but they had each other and had hope.

And then a bunch of rich folk showed up at their door, with the revelation that Isabella was the illegitimate daughter of an elite, and now that he has died, she’s the sole heiress to the York name. They promised that her sister would be taken care of, given a comfortable life, if she took on the duties of her rich family, and promised never to see her sister again. Those duties comprise learning to live up to her new station, marrying into another elite family, and producing more heirs. And this is where Violet finds her, isolated and resentful. With this commonality of experience, Violet gradually helps Isabella engage with the world and offers her an opportunity to connect with the past that she had thought she had sacrificed.

The second story arc offers a nice bit of lightness following the rather heavy going of the first arc, with Taylor Bartlett, a young girl showing up at the post office, wanting to start work as a postman. She’s bright, chirpy and enthusiastic, and she’s convinced that postmen deliver happiness, having had the experience of receiving a letter from Violet some three years previously. At the time, Violet promised to help her, and although she’s far too young, Violet convinces Claudia to take Taylor on as an apprentice. The first problem is that Taylor can’t read, which makes figuring out addresses a near impossibility. Given that she wants to be a postman, she’s apprenticed to delivery man Benedict, and has to shadow him on his rounds. It turns out that she has a very special delivery of happiness to make to someone important in her life.

The second arc is lighter and happier, which is a nice contrast to the first arc. It also makes more of the Benedict character, a character that was comparatively hard done by in the TV series. He’s an amiable grouch that makes a nice presence on the screen, and paired up with a little kid makes for some entertaining interactions. The most important thing is that Eternity and the Auto Memory Doll offers just the same Violet Evergarden goodness as the series. It’s a wonderfully written, magically animated, and emotionally affecting experience that works just as well in the theatrical format as it did in an episodic format. This Blu-ray delivers the film in the quality that you’d expect, but All the Anime have created a great Collector’s Edition for the film; the short story really compliments the film well.