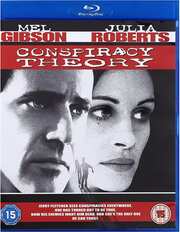 I go through a cycle of appreciation and disdain with this film, as it is an enjoyable romp, albeit a film that’s undone by weak writing in its final act. Sometimes I just want to be entertained with a goofy bit of escapism, and in that regards Conspiracy Theory fits the bill. Sometimes I do wonder if my love of this film waxes and wanes along with the fortunes of its star, Mel Gibson. Conspiracy Theory was made back when “Mad Mel” was still a charming screen persona, rather than a symptom of deeper issues. But this time, my desire to re-watch Conspiracy Theory was motivated by the passing of its director, Richard Donner, and having recently taken in Maverick again, I find that I’m in a bit of a “poor, misunderstood, Mel Gibson” mood, rather than looking for a cancel button to push. Still, Conspiracy Theory might have more relevance than ever before, as some might say that there are 70 million conspiracy theorists in the US right now.

Jerry Fletcher is a New York cabbie, one whose grasp on sanity is weaker than most. He is obsessed with conspiracies, and sees them everywhere. He publishes his thoughts in a newsletter and tries to convince Justice Department lawyer, Alice Sutton of them. He also nurses a rather unhealthy infatuation with Alice and can often be found outside her apartment behind a pair of binoculars. However Jerry touches a nerve with one of his outlandish theories and soon he is on the run from the mysterious Doctor Jonas and his men, with a reluctant Alice Sutton in tow.

Conspiracy Theory gets a 2.40:1 widescreen 1080p transfer, with the choice between DTS-HD MA 5.1 Surround English, DD 5.1 Surround French, German, Italian, Hungarian, Polish, Russian, and DD 2.0 Czech, Spanish, and Portuguese, with subtitles in these languages and Korean. The image is clear and sharp, nice and stable, and free of print damage or dirt. Colours are good, and detail levels are excellent, while the movie is properly filmic throughout. About the only nits worth picking are some crushed blacks and blown highlights, but even with that, contrast is good, and darker scenes are served well by the transfer. The audio is solid, with a nice immersive soundtrack that make the most of the action and the music, while keeping the dialogue clear.

You get 1 disc in a BD Amaray case. The disc boots to a static menu. There are absolutely no extras with this release. You might want to hold onto the DVD, if you’re upgrading... for the text biographies. This is one, underserved film when it comes to extra features in any format.

I enjoyed Conspiracy Theory this time. It still has that lazy writing in its final act that makes me roll my eyes in exasperation, but the likeable characters, and the pace and energy of the story almost makes up for it. Almost, as the sense that the film squanders a smart and well written first half never really goes away. But I certainly felt more charitable to Conspiracy Theory than I have done in years.

It’s really Mel Gibson’s performance as Jerry Fletcher who makes the film work. In addition to his Mad Mel spiel that had been established to this point in films like the Lethal Weapon series, he injects the character with a degree of humanity and pathos that makes him a lot more sympathetic, especially early on where he just appears to be a paranoid conspiracy theorist on the lunatic fringe, trying to live off the grid, suffering from OCD, and obsessively cataloguing conspiracy theories to sate the readership of his self-printed newsletter.

He also tries to convince Alice Sutton in the justice department of his daft theories, ostensibly to get the truth out there, but really to feed his obsession with the lawyer, who he benevolently stalks when he isn’t at his day job as a cab driver. Alice tolerates Jerry as he saved her from a couple of muggers when they first met. Certainly she’s kinder to Jerry where anyone else would sic security on him. She’s an impressive prosecutor who has an obsession of her own, trying to uncover the truth behind her father’s murder.

It all changes when Jerry publishes a newsletter full of conspiracy theories that catches the attention of some mysterious intelligence figures, and they reel Jerry in to find out what he knows. He manages to escape, but not without doing some damage, and when he goes to Alice for help, he winds up arrested. But somewhere in his fractured paranoid psyche lies the truth. It’s here that the film starts slipping the tracks, as it turns out that everything, but everything is connected in this world, and plot holes start to abound.

Conspiracy Theory rolls on with the strength of its characters, the cast performances, and the energy and pace of the editing and direction. By the time I was rolling my eyes at its daft excesses, I was still enjoying the ride all the way to the end credits. Maybe Conspiracy Theory caught me on a good day, but it still holds up well now. The Blu-ray is serviceable, but this film really deserves better than a barebones disc.