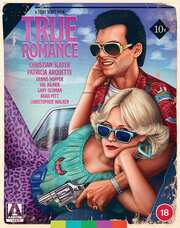 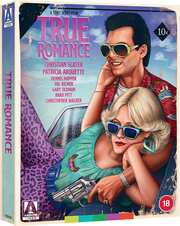 I have long wanted to review True Romance. It was actually one of the first DVDs I bought, when I embarked on the grand double-dip adventure that let me clear out my VHS tapes. I brought the disc home, and watched it that night, and I put Warner’s patented Snapper case on the shelf, and it has stayed there ever since for the last twenty years, as I tried to find the time, and get myself into the mood to watch the film again. It’s a bit of a worry that I haven’t felt like watching True Romance in all that time, the kind of worry that makes me doubt my initial attraction to the film, and makes me want to re-evaluate it. Thankfully, with Arrow Video bringing True Romance to UHD and Blu-ray this summer, if I’m not going to re-watch it now, I probably never will.

It’s well worth rediscovering as well. After all it is a unique combination of style and substance. I always associated director Tony Scott with pure, if often vacuous style. His films looked great, but they rarely had much going on when it came to story and character. They may have been iconic works of cinema, but you wouldn’t expect to see a bunch of pretentious critics, armed with Cabernet Sauvignon and Gauloises, debating the finer qualities of Beverly Hills Cop 2, Top Gun, Crimson Tide and Enemy of the State late into the night. On the other hand, you could see those critics holding forth for hours on end on the works of Quentin Tarantino, who certainly has his particular style, but whose films are crammed full of substance, subtext, rich characters, and all those things that can have people talking for hours over pie after a cinema visit. True Romance was Quentin Tarantino’s 2nd impact after Reservoir Dogs, both scripts that he showed to Tony Scott (although he kept Reservoir Dogs to direct himself). True Romance was Tarantino substance filtered through Tony Scott’s style. There had been nothing like it before, and arguably there has been nothing like it since.

It was the perfect birthday for Clarence Worley; a Sonny Chiba triple bill at the local flea-pit, where he met Alabama Whitman, a rare girl with a like-minded appreciation for kung-fu flicks. It turned into the perfect night as well, and not even the truth behind Alabama’s purpose in that cinema could stop them falling in love and getting married.

It did mean that Clarence had to deal with Drexl, Alabama’s pimp, and like most pimps, he isn’t keen on any of his girls quitting. Clarence only went there to get Alabama’s stuff and tell Drexl what’s what, but he barely makes it out with his life, and a case full of the finest cocaine. That’s the gem of get-rich-quick scheme, and where better to sell that coke than Hollywood? But the Mob want their drugs back. Luckily, Clarence has the King on his side.

True Romance gets a 2.39:1 widescreen 1080p transfer on this disc from a new 4k restoration of the original camera negatives, with DTS-HD MA 5.1 Surround and 2.0 Stereo English, and optional English SDH subtitles. No doubt the UHD will be the disc of choice here, but if you’re not yet capable, this Blu-ray looks excellent. The image is clear, sharp, and suitably filmic with a nice level of grain. Colours are rich and consistent, and detail levels are excellent, with rich contrast and with the black levels spot on. All of this brings Tony Scott’s visual aesthetic across to excellent effect. I went with the surround audio, and it’s a nice, natural, yet immersive mix that is never obtrusive or obvious. The dialogue is clear, and the eclectic music choice, as well as Hans Zimmer’s score really impresses.

The disc boots to an animated menu.

That snapper cased DVD was so barebones, it listed Interactive Menus and Scene Access as extra features. There have been subsequent DVDs and even Blu-rays that remedied that, but this Arrow Video release takes things to a whole new level. Here’s a simple listing of extras.

The commentaries are all on the Director’s Cut, and this is the closest you’ll get to Tarantino commenting on one of his own films.

There are also Select Scene Commentaries...

The following NEW interviews feature input from the costume designer, co-editor, composers that worked on the film, as well as Tony Scott’s biographer and a True Romance superfan.

There are 11 Deleted Scenes with optional commentary from Tony Scott (29:15).

The Alternate Ending lasts 6:23 with optional commentaries from Tony Scott and Quentin Tarantino.

The Electronic Press Kit features the interviews and featurettes that promoted the film on its release.

You’ll find the US Theatrical Trailer, the US TV Spots, and the International Trailer in the Trailers and TV Spots.

Finally the Image Galleries offer around 70 Production Stills, and around 15 pieces of Poster and Video Art.

The Limited Edition release will also come with physical goodies including a 60 page booklet, a double sided poster, and six lobby card reproductions.

I love True Romance, and it might just be my favourite film with Tarantino’s talent behind it, even more so than Pulp Fiction. It is a hard film to categorise even now, and it apparently had audiences even more nonplussed when it was originally released. It’s a love story, a romance, it’s a crime thriller, and it’s a road movie... it’s a genre collision that really shouldn’t work, but it turns out to be very compelling. The protagonists and antagonists tend to blur together, and there’s certainly no particular morality that you can point to in the heroes. They are, after all killers trying to get rich from a drug deal. The answer in this case comes from the music. Hans Zimmer’s playful and whimsical score wouldn’t be out of place in a fairy tale, and that is what True Romance is, a modern day, urban fairy tale, with mobsters and pimps replacing monsters and witches. And just as Hansel and Gretel had to burn the witch in her own oven to stay alive, it is no surprise that Clarence and Alabama have to be just as ruthless.

I didn’t see it at the time, but in retrospect, True Romance kicked off a mini-genre of road movie romances, where unassuming guys would fall for the last woman that they should fall for, setting into motion a fight against criminal elements to stay alive, before the final, bruised and battered, happily ever after, and I do have a soft spot for films like Feeling Minnesota and A Life Less Ordinary.

Released in 1993, True Romance came at a sweet spot when it comes to Hollywood talent. I still can’t believe the supporting cast in this film. Dennis Hopper, Christopher Walken, James Gandolfini, Val Kilmer, Brad Pitt in a small but brilliant role, Gary Oldman, Chris Penn, Tom Sizemore. Blink and you’ll miss Samuel L. Jackson. The performances are uniformly excellent, the characters are rich, vivid and draw the attention, while Tarantino’s dialogue is typically verbose, and replete with pop culture references. Yet at two hours, this is no typical Tarantino sprawl. It gets in, tells its story, and gets out again, leaving a permanent impression. That’s thanks to Tony Scott’s direction, who takes a very un-Tarantino approach to the film’s violence, making it hyper-stylised and operatic, very much fitting into the film’s fairy tale feel. The visual aesthetic of the movie, the filtered exteriors, and colourful interiors, as well as the stylised editing all really does spin Tarantino’s script in a unique direction.

True Romance is an action movie, and it is a crime thriller. But above all it is a love story. You care about the characters, and you go on that ride with them from snowy Detroit to sunny Los Angeles, in search of their happily ever after. That it has to be won in blood and tears makes it all the more meaningful, and this is very much a film that I should have revisited more often. Now that it’s here on this exquisite Blu-ray release from Arrow Video, I have no excuse not to.