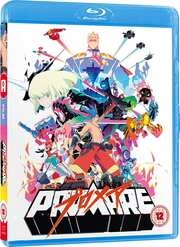 Promare is another example of coincidence in entertainment. For some reason, producers and creators can have similar ideas at the same time, and we get more than one example of a particular story. When the anniversary of the discovery of America came around some thirty years ago, we got three Christopher Columbus movies, but there’s no such synchronicity that explains why we got two Truman Capote biopics in short order. The Promare feature film and the Fire Force anime series came out just two months apart, close enough that you can’t accuse anyone of jumping on a bandwagon. Both productions concern a future world that results following a significant change in human society centred on spontaneous human combustion. The premises for both properties are close enough to be sharing the same DNA. But Fire Force is a shonen series from the creator of Soul Eater, while Promare, from Studio Trigger is more a spiritual successor to shows like Gurren Lagann and Kill la Kill. When experienced, Promare and Fire Force are really quite dissimilar. 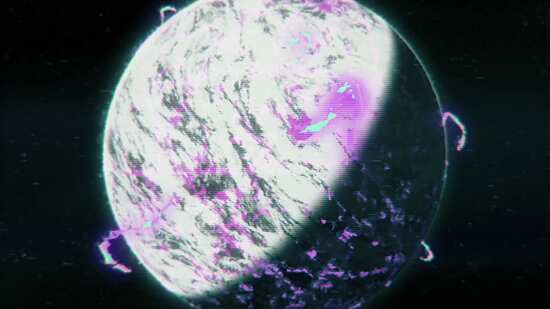 All of a sudden, people started spouting flame, and the world caught fire. Humanity had started throwing up mutants, flame users called Burnish, and fear and hatred of these different people ensued. 30 years later, the world has rebuilt, and there are now special fire-fighters, Burning Rescue to deal with these Burnish incidents. But some Burnish go beyond that, with the Mad Burnish terrorist group deliberately attacking the city, and to deal with that, there is the Freeze Force; leading to friction between the two services. Noses are particularly put out of joint when Galo Thymus of Burning Rescue deals with a Burnish incident, and winds up capturing the leader of Mad Burning, Lio Fotia into the bargain. He’s quickly being feted as hero, but not everything is as it seems, and the fate of the world is in the balance. 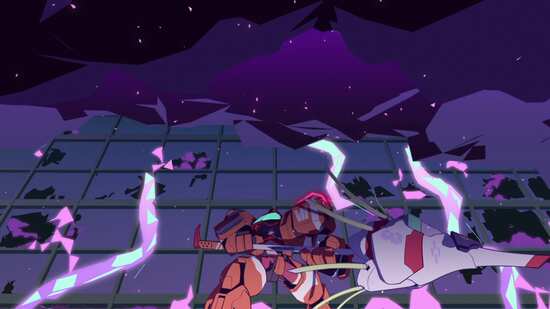 All the Anime are sharing assets with GKids in the US on this one, so you get a 1.78:1 widescreen 1080p transfer, with the choice of DTS-HD MA 5.1 Surround English and Japanese, with English HOH subtitles, English translated subtitles, signs, and French and Spanish subtitles too, all unlocked during playback. The image is clear and sharp, with no issues with visible compression, other than some light banding in darker scenes. It’s a much stylised animation, taking a leaf from the Spider-verse movie when it comes to its flat shaded 3D cityscapes. The character designs are simplistic but memorable, again with comparatively flat shading. Stylistically the animation looks a bit Panty & Stocking, a lot Gurren Lagann, and a heap of Kill la Kill, with an emphasis on fast paced and frenetic action. The surround is effective and immersive, again making the most of the action while keeping the dialogue clear. The Japanese audio was my choice, and the subtitles are accurately timed and free of typos. 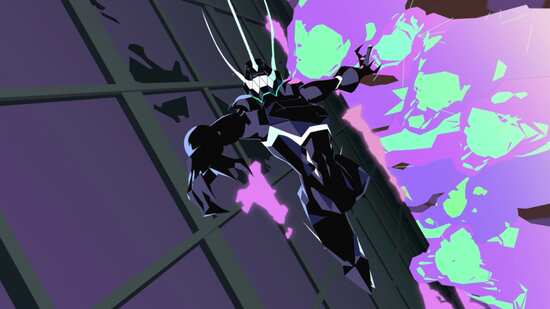 You get one disc in a BD Amaray case with a reversible sleeve. The case I got did have a Scanavo style disc holder though, which as always is a pain.

The following extras are on the disc. 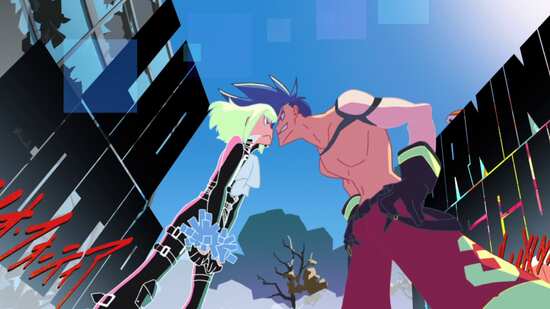 It’s more than we usually get with anime in terms of extras, and it’s a nice touch to have the “Side” bonus animations. 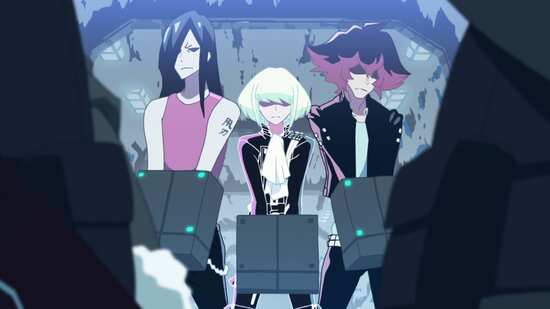 I didn’t know about the Studio Trigger, Gurren Lagann/Kill la Kill heritage behind Promare, or I might have thought twice about ordering it. Instead I got caught up in the hype and fan fervour behind the film, saw its wild character designs and wacky, over the top animation, and got put in the mindset that I had when I watched Redline. Promare is no Redline. I’m not particularly a fan of Gurren Lagann; it had one too many wild plot twists for my liking, and there’s only so much testosterone infused action that I can take, even if the storytelling grabbed my attention. I liked Kill La Kill despite its presentation. It felt like Gurren Lagann with the volume turned up to eleven, but I liked its story more, the magical girl pastiche appealed to me in a way that the giant robot pastiche of GL didn’t, and with the protagonists and antagonists of the show largely female, testosterone overload was never an issue. It’s the exception to this particular stylistic rule. Promare is very much of this lineage, both with its characters and its story, and especially the animation, turning it way past eleven on the volume dial. But it’s the worst iteration of this style yet. I haven’t seen an anime film as unbearable as this in quite some time. 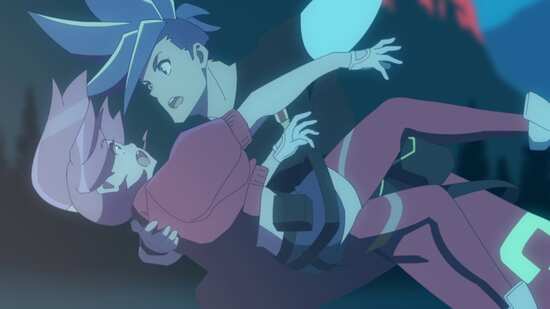 It is the same story again. With Gurren Lagann, the Maguffin was Spiral Energy, with Kill La Kill it was the Life Fibres, here it is Promare, what initially sparked off this fiery transformation to the world, created the Burnish, and it underlies the whole story. You have Galo Thymus and his non-descript team of fire fighters on one side, you have Burnish terrorist Lio Fotia and his no-name allies, you have the city governor Kray Foresight and these three forces circle each other in the film, with plenty of revelations and plot twists along the way, as the secrets of this world, the Promare, and the Burnish are revealed. It all culminates in a massive mecha battle over a city-sized spaceship which is so Gurren Lagann that it aches. And surely the main character Galo’s resemblance to Kamina can’t be discounted. The big problem is that none of these revelations, the character developments have any time to breathe. The film is trying to tell a whole season worth of story in just under two hours of runtime. It feels like being battered into submission by the film. 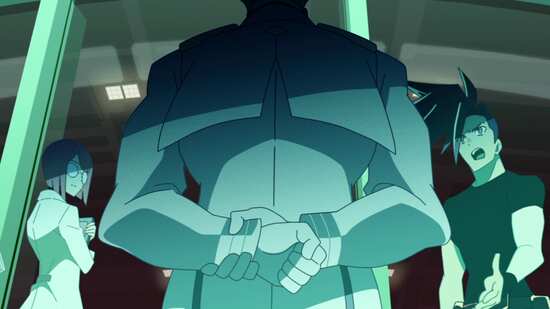 Battered into submission is what the action animation in this film also does to me. One of the important things about action is choreography, fight sequences are usually directed like dance, although with considerably more brutality. But another important aspect is to breathe. There is an attention span with action. There is only so much that the eyes can take in, before the brain needs to process it, so it’s important to pause every few beats to let the audience connect with what they have just seen. It’s also a chance to have a bit of dialogue. This doesn’t mean slowing things down, or stopping them completely. It can be completely subliminal. No one can accuse a classic Jackie Chan action sequence of being slow. But if you break a scene down clinically, you’ll notice that every once in a while the camera will just stop moving, give the audience a chance to catch up. 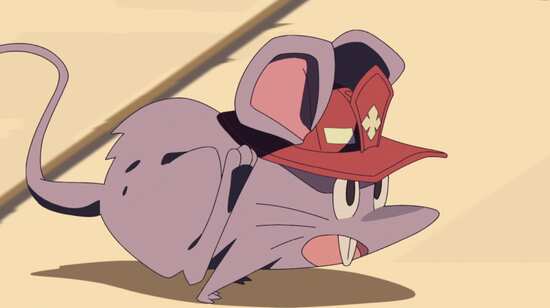 Promare has none of this. It’s just relentless crash, bang and wallop from when an action sequence starts to when it ends. I couldn’t keep up, and more importantly, I couldn’t care. It quickly got to the point where I just sort of drifted away during an action sequence, just intending to note who was left standing at the end, and just taking for granted that some spectacular action had just taken place. This is no way to watch a movie, and for the first time watching a film, I have to say that I fell asleep during an action sequence... twice! 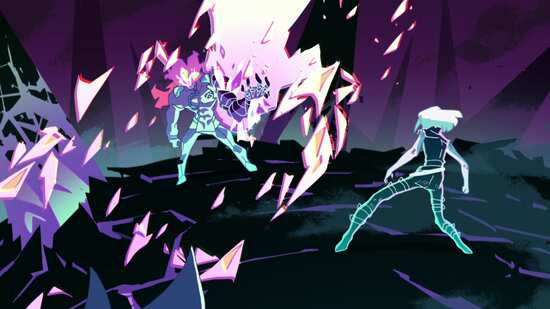 Promare is all style over substance, which isn’t normally a bad thing; take the aforementioned Redline for example, but Promare’s style is very much an acquired taste. Worse, it’s telling a story that has been told more effectively by its creators on two previous occasions. In other words, watch Fire Force instead.