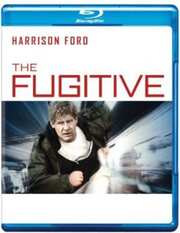 DVD
Fugitive, The (US)

Review for The Fugitive

The Fugitive is one of those films that I was dead set on upgrading to Blu-ray from the moment that I got the HD upgrade. The DVD was pretty good for 1998. But that was 1998, practically the dawn of the format, and it wasn’t long before the disc in the snapper case was looking past it. When I finally got my BD player and went looking for the HD version of the film, I found it easily... too easily. Just as with the DVD, the Blu-ray of The Fugitive came out right at the start of the format’s lifecycle, back in 2006. It’s not a good disc by all accounts. I decided to wait; after all, it would definitely get a re-mastered release, right? But in the UK, that ancient Blu-ray transfer is all that we got. Fortunately, The Fugitive did eventually get a spruce up for its 20th Anniversary, and it got the re-mastered release that it deserved. But to date, that’s only in the US and a few other territories. Just look for the one in the white case when you’re importing. 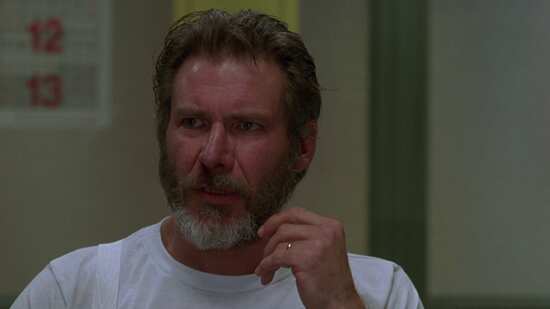 When the wife of respected surgeon Richard Kimble is murdered, he’s arrested as the prime suspect, despite his protestations that a one-armed man was responsible. The police case against him seems watertight, and the jury agrees. He’s sentenced to death. During his transfer to prison, the bus crashes, and Kimble escapes. He’s going to have to do what the police didn’t; solve his wife’s murder. That would be difficult under any circumstances, but now Kimble has dedicated US Marshall Samuel Gerard on his tail, and he never gives up. 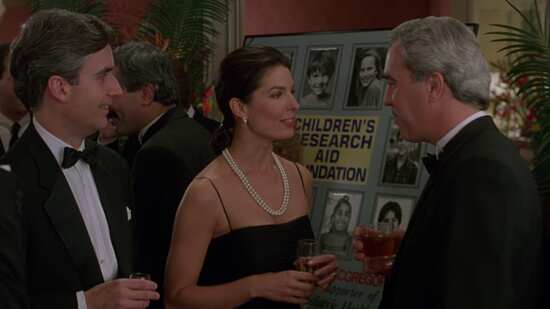 I never saw the original Blu-ray release, but this re-mastered version delivers all that you might want from the presentation. The Fugitive gets a 1.78:1 widescreen 1080p transfer and you have the choice between DTS-HD MA 5.1 Surround English, Dolby Digital 5.1 Surround Spanish, Italian, Polish Voice-over, Russian and Thai, and DD 2.0 Stereo Portuguese, Czech, Hungarian, and Spanish. There are subtitles in these languages and Chinese, Japanese, Korean, Croatian, Greek, and Turkish. 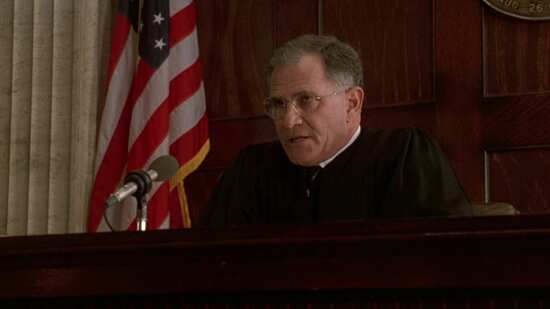 The image is great; The Fugitive has a drab design and overall colour palette to begin with, set during the winter months. But the image is clear and sharp, and there is a decent level of grain. Skin tones are spot on, contrast is excellent, with fine black levels and decent brightness. And when there is colour on screen, it is bright and vibrant without being overpowering. The audio is equally as impressive, with a nice, immersive surround track that brings across the action and the music with impact without ever overpowering the dialogue. It’s an excellent presentation that you shouldn’t hesitate in buying if you want The Fugitive on Blu-ray. And it fixes that dodgy dolly shot on the train tracks. 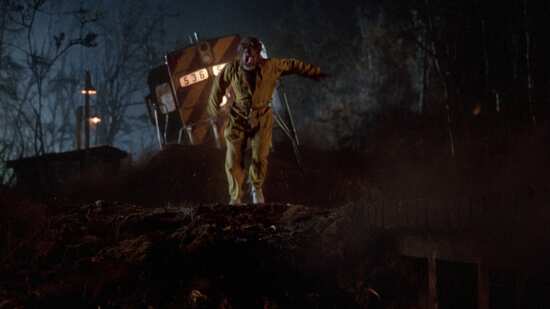 The disc comes in a thin BD eco-case (with holes cut out in the plastic). The disc boots to a static menu. The disc collects extras all the way from the original DVD Special Edition to the previous Blu-ray, as well as sourcing some that are unique to this release as well. 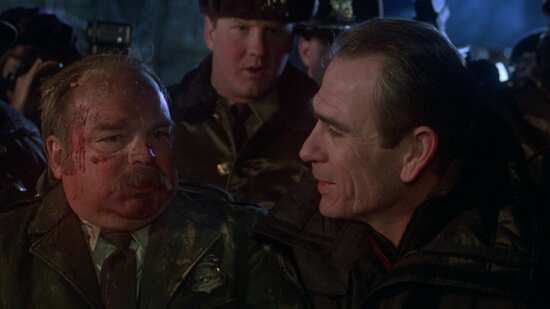 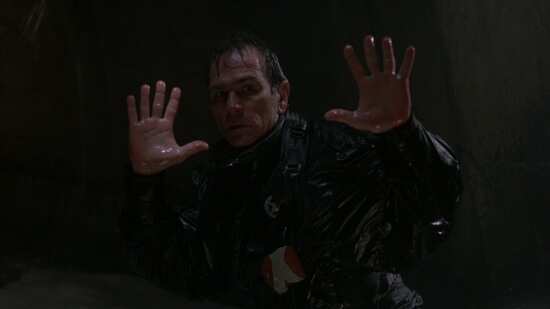 You might want to avoid the TV Pilot episode from 2000 which spun-off from the film. It’s not good to begin with, and compared to the film it really is dire. Oddly enough, it managed to go to series, and get a full 23 episodes before being cancelled on a cliff-hanger. It would have been better if they’d put an episode of the David Janssen series on the disc instead. 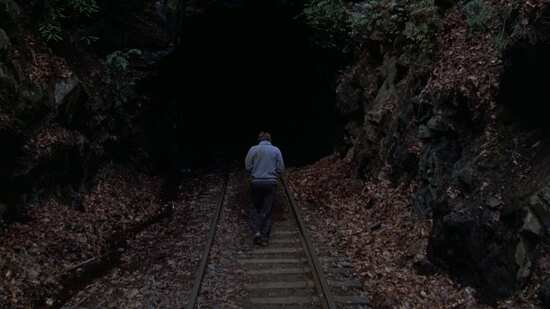 The Fugitive was great when I first saw it, but almost 30 years on, it’s clear that it is a veritable classic, an edge of the seat chase thriller that keeps you on the edge of your seat through its two-hour plus runtime. That’s thanks to two powerful leads, two parallel story arcs to hold the attention, as we follow Richard Kimble’s search for his wife’s murderer, and Samuel Gerard’s pursuit of Kimble. Great direction, a spot-on pace, and a compelling story couple with a memorable soundtrack and an unusual setting during the winter months, all contributing to make The Fugitive really quite special. There are plenty of paranoid chase stories out there, unjustly accused heroes and the obsessed policemen that pursue them; you can see examples of them in the extra features, with Les Miserables cited as a direct influence on this film, but The Fugitive is good enough to be parodied, referenced, and influence subsequent films in turn. 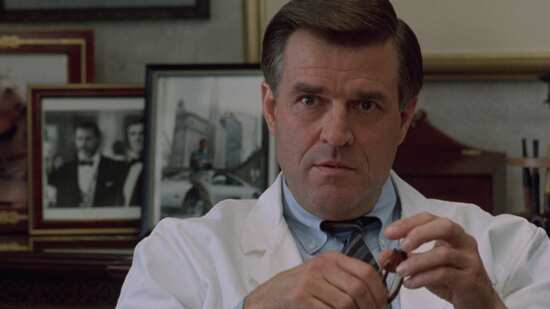 Kimble carries the emotional heart of the film, a man looking for justice following his wife’s murder, which would have the added benefit of clearing his name, but it quickly becomes clear that it is a secondary concern to him. His is a mostly solitary quest; not too much in the way of dialogue required, but the character is sympathetic and magnetic. On the other hand you have Samuel Gerard and his team of US Marshalls. They have to deal with the aftermath of the train wreck and the escaped prisoners, including Richard Kimble, and where Kimble may be silent, Gerard is voluble and emphatic, with an irascible charisma which is just as magnetic on screen. And he has his team to bounce off, providing plenty of humour as well. 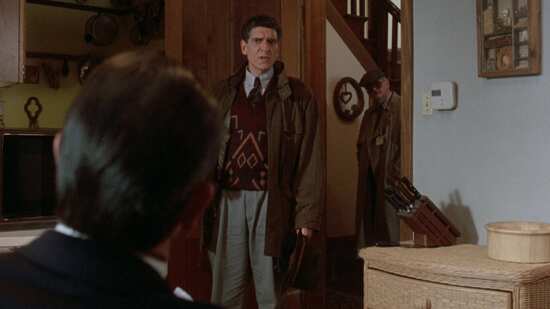 The mystery is effective too, even though I have seen the film countless times, and know its twists and turns off by heart at this point. It’s an intelligent thriller that doesn’t insult the audience by dumbing down in any way, and it all unfolds in a way that keeps you interested. 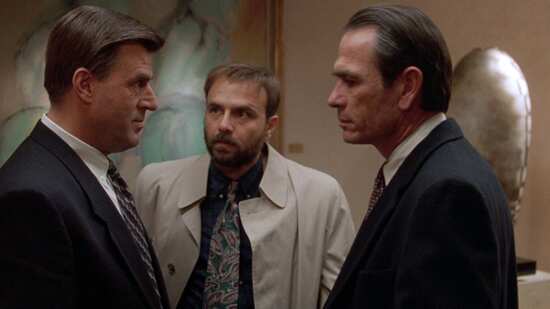 If like me you’ve been steering clear of the original (and in the UK, only) Blu-ray release, then you can buy this 20th Anniversary re-mastered edition from the US comfortable that you’ll get the back catalogue Blu-ray presentation that you expect. Excellent picture and sound, and a nice selection of extras (including that 2000 TV Pilot episode if you’re feeling masochistic) make this the version to go for. Of course importing might be a bit of a pain right now.