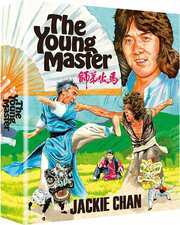 Article
Jackie Chan's 100th is Coming To The UK courtesy of Cine Asia!

I love Jackie Chan movies from when he was in his prime. Those are the Golden Harvest years, the Police Story movies and the Project A movies, Wheels on Meals and Miracles and the like. Those are my favourites. The Young Master is the best of the rest in my view; the first film that Jackie Chan made for Golden Harvest, and the second that he directed after Fearless Hyena. It’s also the movie that put the nail in the coffin of the old school kung-fu flicks. Up till that point, and most of the films that you’d have seen Jackie Chan in, were the period kung-fu movies; two rival schools, one good, one evil, a beloved master betrayed, and a devout student learning a new style of kung-fu from a secret handbook before exacting revenge in his teacher’s name. The Young Master took those ingredients, that typical setting, and buried it all with a movie that did things completely differently, and became the biggest movie in Hong Kong to that point.

Two orphans have been raised in a Martial Arts school. Keung (Tiger) is the star pupil and when the time comes for the annual lion dance against a rival school he is expected to uphold the school’s honour. However he feigns injury and Lung (Dragon) has to take his place. Lung’s admirable efforts are in vain, as during the contest he finds that Keung has accepted money from the rival school to compete for them. The irate master expels Keung and he soon joins up with a gang of outlaws led by the feared Master Kim. Lung persuades his master that he should forgive Keung and leaves the school to find and bring him back. A case of mistaken identity sees Lung identified as White Fan, Keung’s new criminal moniker, and soon the police are after him.

I reviewed the Hong Kong Legends release way back when, and was pretty happy with what they gave us. What did I know?! This new Blu-ray release from 88 Films not only gives us a 2k restoration of the original negative, but you get three cuts of the film on two discs as well. There are even more versions if you count all the soundtrack options. For the purposes of this review, I watched the Hong Kong Theatrical Version in its original Cantonese form, the one with the Gustav Holtz soundtrack.

The 2k restoration of the 2.35:1 transfer really does come up a treat on these discs, with their 1080p widescreen presentations. The image is clear and sharp, colours are rich and consistent and detail levels are excellent. It makes the old HKL disc look like a VHS tape in comparison, given the compromises the DVD releases used to make. The film has a nice level of grain that makes for an authentic, cinematic viewing experience, albeit without any signs of age or print damage. The production values really do come across with this HD restoration, and when you see the intricacies with the costumes and production design with the opening lion dance, it will feel like watching the film for the first time.

Disc 1; The Hong Kong Theatrical Cut comes with four soundtracks. The PCM 2.0 Mono Cantonese Original Theatrical and the PCM 2.0 Mono Cantonese Home Video Mix share one English subtitle track. The PCM 2.0 Mono Cantonese Alternate Export Soundtrack has been created for this release, combining the original dialogue with the music from the Export versions of the film. This has its own subtitle translation track. Finally there is a DTS-HD MA 5.1 Surround English dub with a signs track translating screen text. The original Cantonese audio was fine, no glitches or dropouts, although it does have that harshness that older film audio has at the higher volumes and frequencies. The action comes across well, the dialogue is clear, and there is some serious Holtz at work in the music. For the purposes of this release, 88 Films have commissioned a new subtitle translation, and it’s easy to read, flows well, and revels in wordplay.

Disc 2; Both the International Export Cut and Extended Export Cuts come with PCM 2.0 Mono English dubs, with HOH subtitles (dubtitles) and a signs only track.

You get two discs on each inner face of a BD Amaray. Both discs boot to static menus. There are 6 Lobby Cards inside the BD case as well, and the case has a reversible sleeve. This fits in a solid, card slipcase with some gorgeous artwork commissioned for this release. The slipcase has room for some more goodies as well. The blurb for the release is printed on a removable piece of card, and the way it’s folded, it too can fit in the slipcase once it’s peeled off. 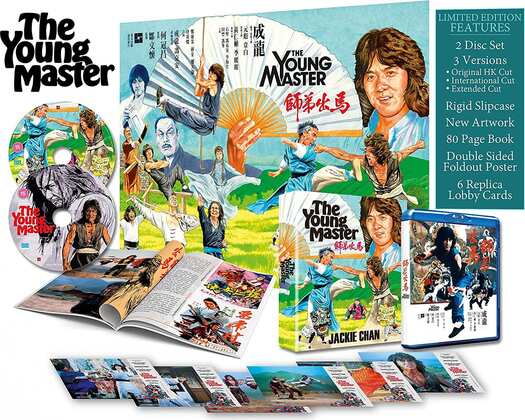 There is a fold out poster made of some seriously strong paper, which is reversible, and offers both versions of that Amaray case sleeve art in a larger form factor.

There is also an eighty-page booklet. It’s about the size of the slipcase, which is an excellent thing. If there is one thing that I’ve disliked about previous 88 Films releases, it’s the size of the booklets, designed to fit inside the Amaray. This larger size for the booklet makes the contents easier to read for these middle-aged eyes. Of course you have to pay the Collector’s Edition premium for the privilege. There are three detailed pieces from Will Blaik, Tim Murray, and James Oliver, all well worth reading, and there are plenty of stills and promotional imagery as well.

Disc 1 has the following extras.

There are further 88 Films Trailers for Dragon Lord, New Fist of Fury, Fearless Hyena, Shaolin Wooden Men, Spiritual Kung Fu, and The Master, and all these gorgeous 2k restorations make want to throw those old DVDs out.

The Jackie Chan and Hwang In Sik interviews will be familiar from the HKL disc, while Brandon Bentley is just as knowledgeable and as verbose as Bey Logan was. Rick Baker and the Art of the Cut offer retrospective perspectives on the film, but for me the real treasure is the archive material, the deleted scenes “The Cut Master” and the outtakes “NG Shots” (which in subsequent JC films would play under end credit sequences).

If two versions of the film aren’t enough on this disc, there is also an audio commentary on the International Export Cut from Audi Sortie & Chris Ling, taking a look at the film from a gamer perspective, and the effect the film had in Japan.

The video game comparisons are apt, and it’s clear that The Young Master inspired a generation of game makers in the early eighties onwards. You have your protagonist, on a quest seeking his brother, and having to engage in a series of fights of increasing intensity and difficulty, until finally there is the toughest enemy of them all to battle. And more specifically, when you see characters fighting with fans, with swords, indeed all manner of deliberate and improvised weapons and when one of the enemies can best be described as rotund, I can’t help but be reminded of early eighties videogame classic Yie Ar Kung Fu.

That little diversion aside though, I still love The Young Master. It’s delightful comedy fun, one of the films that defined the Jackie Chan that would go on to far greater success with films like Police Story and the like. The Young Master is a delightful kung-fu comedy that also marks a dividing line in the films that came before, and what would soon become a whole new genre. For me it’s the last of the period kung-fu movies as we knew them, the whole rival schools, slighted master, student out for revenge tropes. Films like that were all that Hong Kong seemed to make in the seventies, and with this film, Jackie Chan not only deconstructs and destroys those clichés, he ushers in the new way of doing things. Thereafter, period Hong Kong films would really have to reinvent themselves and up their game to keep up, with films like the Once Upon A Time in China franchise.

Those early movies were more focused on choreography, about demonstrating martial arts styles and looking elegant, usually with a serious tone to the story. Young Master gets its martial arts demonstration out of the way right at the beginning, with the Lion Dance competition, showing off skills and training without having an actual fight. But thereafter, when it comes to the fight sequences, it’s about winning, about beating the opponent by any means, although doing so in a visually inventive and comedic way. There’s no need for visible wire-fu, and the action feels more grounded in the real world. Things get tougher and tougher for the protagonist, until the final fight, where he’s well on his way to losing before pure luck sees him through.

The Young Master is still a whole lot of fun to watch, entertaining, and funny. I can stay glued to the screen even late at night. I’ve tried watching some of JC’s earlier fare at similar late hours, and I’m off to the land of Nod long before the end credits roll, a testament to the staid and formulaic nature of seventies martial arts movies. But The Young Master ushered in a whole new formula that still holds up well today. And compared to the old HKL DVD release of The Young Master, it’s as if 88 Films got a time machine and went back to 1980 to source a new print for their Blu-ray. Personally, I’m not a fan of dubs, but if you can handle Jackie Chan in the ‘original’ English, then there is a cornucopia of riches in this Collector’s Edition, and the second commentary can’t be sniffed at. Even with the main feature disc and its surround sound dub, you also have the choice of three Cantonese audio tracks and two subtitle translations. The booklet is gorgeous, well worth reading, while the physical package is the best I have seen yet from 88 Films.