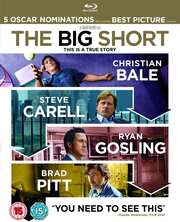 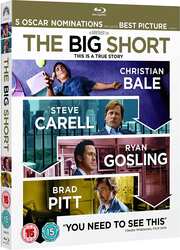 Review for The Big Short

I never thought that I’d be nostalgic for the last apocalypse, but here we are. The idea of economic collapse, throwing millions of people out of their homes and their jobs, destroying their livelihoods seems like small potatoes compared to an actual viral pandemic claiming hundreds of thousands of lives. It seems quaint now, how 2008 felt like such a disaster. Perhaps some of that fear comes from how we just didn’t understand what was going on. Serious looking newsreaders came on screen to tell us that sub-prime mortgages had caused the collapse of the banking sector, which had spread carnage through the entire global economy. We took it all on trust that this was so, but when you think about it, mortgages are comparatively tiny things, people borrowing money to buy their houses, money that they promise to pay back, lest they default and lose their homes. How can something like this wreck the world? You’d expect it to ruin a family or two, at worse wreck a mortgage lender or two, and in the most extreme case, maybe knock the housing industry off the rails, not have implications across the entire economy. Thankfully, The Big Short explains just what actually happened.

Based on a true story, The Big Short begins with Dr Michael Burry, a hedge fund manager with an eye for detail and an obsessive talent for analysing numbers. That’s an essential skill in making money for his clients, but the opportunity that arises when he spots a flaw in the mortgage bond industry will have global implications. Bonds issued against mortgages have been considered a safe bet for thirty years, but the housing industry in 2007 bears no resemblance to how it was thirty years previously. Burry’s idea is to short the mortgage bond market, betting against its stability, having spotted a legislative cliff-edge coming that could shock the market.

There are a couple more hedge fund managers who catch onto this idea as well, Mark Baum and his team, who are approached by Jared Vennett, a banker who has learned of Burry’s scheme, and youthful investors Charlie Geller and Jamie Shipley, who have the help of retired investor Ben Rickert. They’ve all cottoned onto the expectation of massive returns for their investments, but it might just be that the system is so blind to its flaws and fraudulent, that even their dead cert gamble might not work. And slowly the realisation dawns that for them to win, everyone else has to lose.

The Big Short gets a 2.40:1 widescreen 1080p transfer on this disc, with the choice of DTS: X and DTS: Headphone X English, and Dolby Digital 5.1 Surround French, German, Italian, Japanese, Spanish, and English Audio Descriptive. There are subtitles in these languages and Danish, Dutch, Norwegian, Finnish, and Swedish. The image is solid, clear and sharp, detailed well, and with strong consistent colours, although The Big Short is an odd choice for the orange and teal colour grading. It’s pretty standard drama, mixing dramatic and stock footage. The audio is good though, very immersive with a unique score and a nice pop soundtrack, while the dialogue is clear throughout.

You get one disc in a BD Amaray case wrapped in an o-card slipcover. The disc boots to an animated menu.

Some time ago, I reviewed a documentary called Four Horsemen from 2012 that took a rather jaded look at the global economy following the 2008 collapse, and gave it a holistic critique. The sub-prime mortgage scandal that triggered the collapse was just a small part of it, and only briefly looked at. But one thing that I noted in the review was the way that the financial industry deliberately obscures its workings to throw off the ill-informed and amateurs, continuing to exist as something of a closed shop. There is so much jargon and labyrinthine convolutions of artificially layered complexity that the average person will just give up. I also noted that the economy as a system of value and worth has long since ceased to exist replaced instead by a means of making money from nothing by a series of gambles, betting against or for outcomes. These are both key elements of The Big Short, but put in an emotional context, giving faces and voices to the characters involved that really make this film work in a way that a simple documentary can’t.

The end result is, that through these characters and the film’s comic elements, often breaking the fourth wall to get a critical point across, or comically point out an inaccuracy in the film’s recreation of the history, the whole incomprehensible mess of the sub-prime mortgages that led to the 2008 financial crash becomes easy to understand. What becomes clear is just how dirty, twisted, and criminal the financial industry was (and as noted in the epilogue still is), that they deliberately engineered a flawed system to make money, and ignored the flaws, let the pressure build until the system crashed.

The thing about it is that the protagonists of The Big Short, the three sets of hedge fund managers that we encounter, the prophets of doom that discover the terminal illness in the system aren’t heroes. Their first instinct isn’t to warn the industry and the government that the rotten structure that they’ve constructed is about to collapse; they want instead to bet on that collapse, expecting great returns given that the system is blind to any weakness. That they are doing it for their investors as well as for personal gain gives them a little bit of altruism, but not too much.

What makes the film interesting in just who these characters are. Michael Burry, the man who discovers this impending doom looks more like a garage software engineer than a city investor. His social skills are non-existent, he lives in his office barefoot and scruffy, and he likes to drum. It’s his obsessive skill at analysis that lets him see what the markets will do, and what makes him a successful hedge fund manager. You can see that for him it’s an intellectual exercise, divorced from reality, and the game is to make money regardless. Of course this being such a bizarre idea of the rock solid mortgage market collapsing, he faces disbelief and even rabid scepticism about his plan.

Mark Baum on the other hand loves to hate his job. Scarred by personal tragedy, and cognizant that the banks have functioned on pure greed for several years now, he has a cynical approach to hedge fund management that would be a canker, were he not successful. He’s recruited a group of like minded cynics (and one optimist who is really good at his job), and it’s as if he’s waiting for the house of cards to finally fall so that he can say ‘I told you so’. So when he’s approached with this plan by banker Jared Vennett, a slick man who has the gift of the gab and a single minded approach to making money, it’s like he’s been given front row seats to the apocalypse, and he’s determined to bring popcorn,

Charlie Geller and Jamie Shipley on the other hand are the optimistic kids in a candy store. They’ve made their initial millions in a fund by betting on the unlikely and least wanted outcomes, events that rarely happen, but when they do they offer big returns, and when they learn of the sub-prime thing, it’s like their ultimate bet. They do have a mentor in Ben Rickert though, a man who has left investment behind but who has a realistic if slightly paranoid perception of how the industry works.

It looks like an unlikely bet to begin with, but as the film unfolds, the protagonists have to face the dawning truth of just how broken the system is, how it’s engineered to deny the obvious, which not only at first denies them the profits they are owed, but ends up making the final collapse all the worse when it does come. And slowly the consequences of all of this eventually dawns on them, the realisation that they are profiting from misery on an unprecedented scale. It manages to humanise and make sympathetic characters that you should have no real reason to like.

The Big Short is in many ways an object lesson in small actions having large and unexpected consequences. Mortgages were thought to be secure, that people who borrowed to buy houses tended to spend their lives paying the loans back. This was a rule. It was a sure thing, and investing, or betting on this was also a sure thing. But then along came the mortgage brokers, who counted their commission above all else, and all they needed to do was get signatures on dotted lines. They started selling mortgages to people without good credit histories, people without security, even people without jobs, and these sub-prime mortgages were created. Obviously investors only wanted to invest in good mortgages, so tricks were created to bundle the bad mortgages along with the good to invest in. The investors bet on the stability of the mortgages, and people bet on the strength of the bets, and so on and so forth. A domino chain reaction of consequences was set up throughout the industry. And in 2007, when the markers were called on the sub-prime mortgage market, and people had to pay up, and found they couldn’t, the first domino in that chain reaction fell, knocking down all the others, and we’re still feeling the consequences of that crash today.

I loved The Big Short. It’s darkly funny, witty and smart, with a rich and engaging cast of characters. Most importantly, I finally understand what happened in 2007 and 2008 that left the world in such a mess. Paramount have put together a great Blu-ray with a nice set of extra features, and great AV. Worryingly in the coda, the film also mentions that lessons haven’t been learned, and that the same thing is happening again. I would have expected after a housing crash that house prices would fall, and it always perplexed me as to why prices have instead continued to increase. I expect there to be a sequel to this film in a few years.