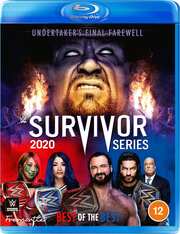 Synopsis:
Emerging from the darkness, The Phenom made the WWE Universe come alive at Survivor Series. Thirty years later, Undertaker says his final farewell from in-ring competition in front of his peers, rivals, and the WWE Universe in a grave celebration of The Deadman. RAW and SmackDown collide in the ultimate battle for brand supremacy.

The Head of the Table goes one-on-one against The Chosen One when Drew McIntyre goes head-to-head with Roman Reigns in a Champion vs. Champion match. The Empress of Tomorrow battles The Boss when Asuka faces off against Sasha Banks.

BLU-RAY INCLUDES A FREE 16 PAGE UNDERTAKER MINI-COMIC BOOK. This full colour mini-comic book is taken directly from the original 'Undertaker: Rise of The Deadman' graphic novel published by BOOM! Studios, written by Chad Dundas and illustrated by Rodrigo Lorenzo. The novel chronicles the untold story of the Phenom's life, from his history with Paul Bearer and Kane to his unforgettable battles with the greatest legends in WWE.