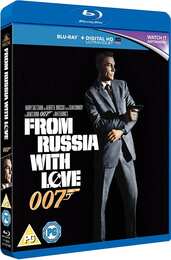 From Russia With Love (Blu-ray Details) 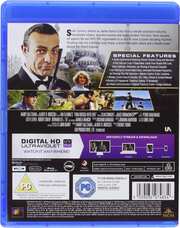 DVD
From Russia With Love: Special Edition (James Bond) (US)

Blu-ray
On Her Majesty`s Secret Service

Blu-ray
For Your Eyes Only
Related Articles

Review for From Russia With Love

For a long time, From Russia With Love was my favourite James Bond film. While Dr. No introduced Ian Fleming’s secret agent to the world, it was the second film that added those touches that would come to define the franchise, the pre-credits action sequence, the theme song, and it introduced the Q character. Yet of all the Bond movies, this is probably the closest the franchise got to a proper spy thriller. It could have been a Le Carré story with its tale of spy versus spy in Instanbul, the crossroads between East and West at the height of the Cold War, and all in aid of piece of cipher technology. No megalomaniacal plans to destroy the world, and no arch-villain in a grandiose secret lair. For a long time, this was Bond as pure as it could get for me, and then in the nineties, Austin Powers came out, and overnight From Russia With Love became a self-parody. 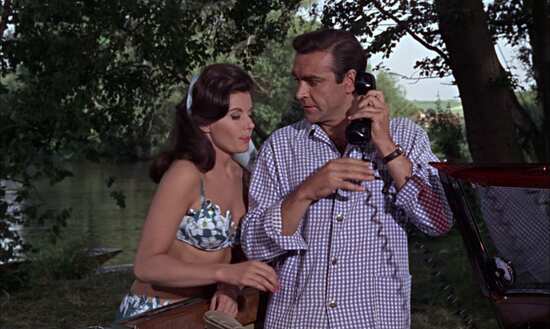 You really should look a gift horse in the mouth when you’re in the secret service, but MI6 can’t turn up the chance to get their hands on a Soviet Lektor cipher machine when they hear that a Russian woman, Tatiana Romanova is willing to defect with the machine, if the contact is James Bond; apparently a photograph of him was all it took for her to fall in love. On her part, Romanova has been ordered to entrap Bond by her superiors. And while Bond is a seasoned agent, he’s not ready for how the game of cat and mouse between East and West is played in Istanbul. Luckily he has the aid of local Intelligence Station Chief Kerim Bey to help him navigate the choppy waters. But someone else is pulling all their strings, looking to embarrass both the Russians and the British, and kill James Bond in the process. 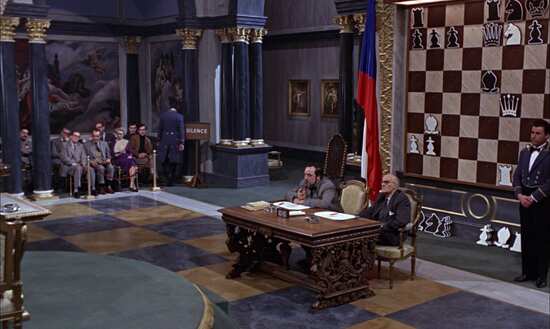 From Russia With Love gets a 1.66:1 pillarboxed 1080p transfer with DTS-HD MA 5.1 Surround English, DTS 5.1 Surround German and French, DD 5.1 Surround Spanish, Portuguese and Czech with subtitles in these languages and Dutch, Danish, Finnish, Swedish, Norwegian and Japanese. Your mileage may vary as to the benefits of an aged Lowry restoration in this day and age of 4k scans and cutting edge restorations, but From Russia With Love looks pretty good even now, clear and sharp with good detail. Colour reproduction is impressive, while shadow and dark detail holds up well. The one nit to pick might be with the source, the day for night filming which I always find rather forced and artificial. It might be a shame that the original audio isn’t available, but the English surround track keeps everything more front and centre anyway, with the surrounds rarely called upon. The dialogue is clear throughout and the action and music comes across well. 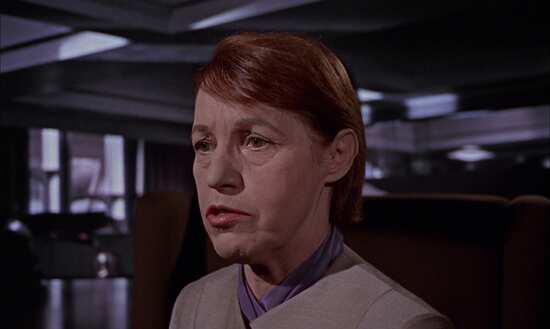 This title is distributed by 20th Century Fox in the UK, and with the whole Disney thing, it might be worth picking it up while you still can, before stock vanishes, and until we ultimately learn who will distribute the Bond movies next,

You get one disc in a BD Amaray case with a leaflet for a UV code. The disc boots to an animated menu. 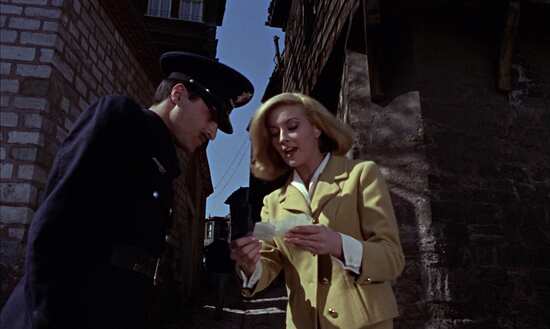 The film gets a patchwork, moderated audio commentary from director Terence Young and Members of the Cast and Crew.

In Declassified: MI6 Vault you get the following vintage featurettes. 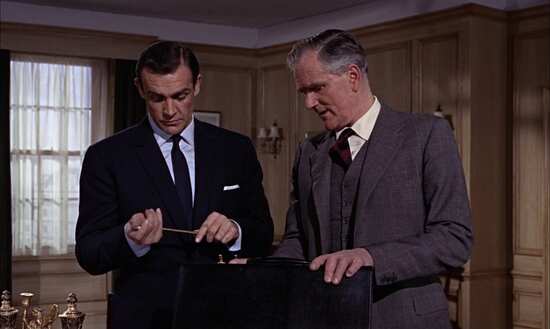 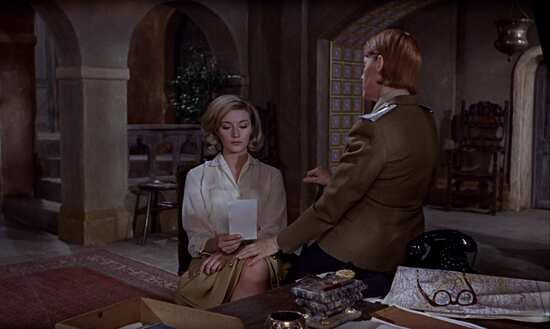 007 Mission Control is that bookmark listing for the movie that lets you jumps to specific scenes with characters , gadgets, and plot points. There’s also a brief featurette on locations in the film. It’s more of a glossary.

In Mission Dossier you’ll find the making of and a biography. 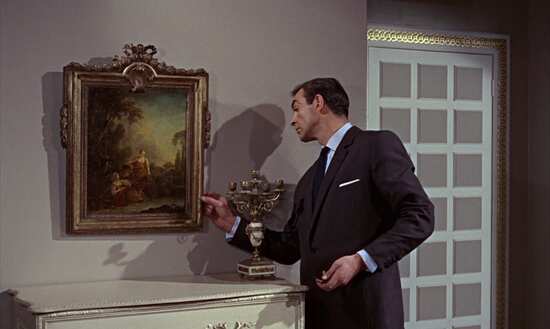 There are film, TV and radio trailers in Ministry of Propaganda.

Finally there is an extensive Photo Gallery. 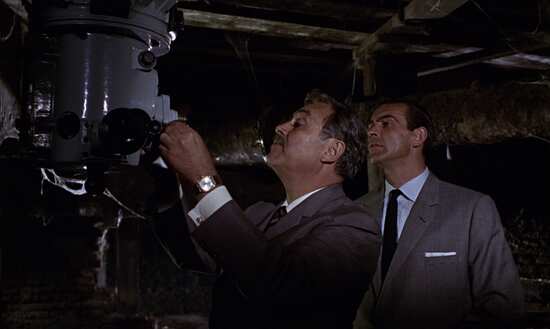 I’m almost back to appreciating From Russia With Love. I don’t get the parody sense from any of the protagonists, not that I ever did, while I’ve lost the sense of the disposable minions from most of the antagonists. It’s just two characters now that really still stick in my mind as comedic; the disembodied hands of Blofeld and his cat still scream Doctor Evil, even more so than Donald Pleasence in You Only Live Twice, while Rosa Klebb is even more Frau Farbissina than Frau Farbissina. The fact that she’s such a prominent character in this spy thriller still makes it impossible from me to love From Russia With Love as I once did, but I do still enjoy it. And it’s really only the meeting on Blofeld’s yacht that now throws me out of the film. 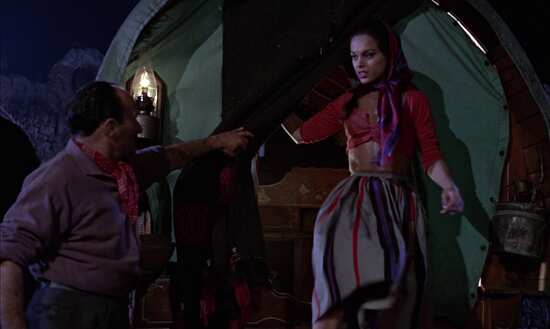 Once again, I come back to the fact that From Russia With Love is as close to a proper spy thriller as Bond ever got, with spies versus spies, acting clandestinely, working against each other, East versus West, all for a bit of kit that encodes and decodes messages. There are no superweapons, no secret lairs, no massive explosions, and the only thing to really muddy the Cold War waters is the third party of SPECTRE playing both sides against each other, looking to profit from the mayhem. 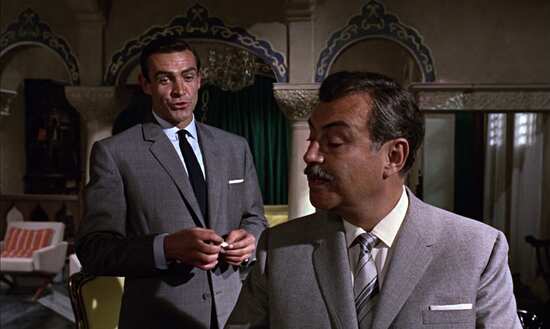 I also really like that it doesn’t feel as if Bond is on his own in this tale. It’s more of a two-hander, with him working side by side with Kerim Bey in Istanbul to get to the bottom of these machinations. Bey is a vibrant character, able to fill the screen as much as Bond, and just as adept with the ladies. The partnership of the two characters is a big piece of the entertainment in the story, and as such it makes the denouement of the film more personal and affecting to Bond than just another villain to be defeated. 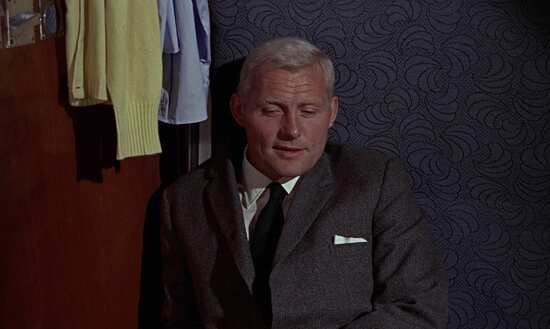 Speaking of which, Robert Shaw is most effective as Donald Grant, the assassin trained by SPECTRE specifically to kill 007, although I’m in two minds about the class commentary that comes out in their confrontation, and especially the way Grant gives himself away. Maybe back in 1963 it was an effective piece of writing, but now I can only think about that classic comedy sketch with the Two Ronnies and John Cleese about the class divide in Britain. 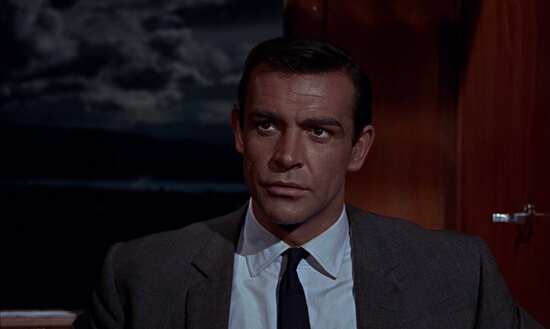 That From Russia With Love has dated comes as no surprise, but that it’s the James Bond movie so damaged by the Austin Powers parody is surprising; I would have thought that it was You Only Live Twice which was more directly parodied. I don’t think that taint will ever fade for me, but if you’ve never seen an Austin Powers movie, then you really should watch From Russia With Love, it’s the Bond movie that most looks like a spy movie.