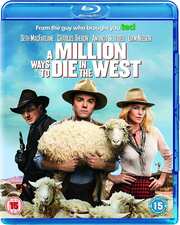 A Million Ways to Die in the West (Blu-ray Details) 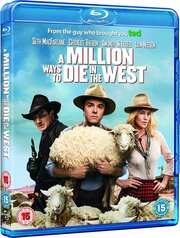 Review for A Million Ways to Die in the West

What happened to freebies? They used to give away DVDs as if they grew on trees. There would be tonnes given away with newspapers each week, eat enough chocolate or crisps and you could send away for them, there was even a daily lottery website where I managed to snag a couple of discs. They don’t do anything like that with Blu-rays. The closest I’ve gotten to something similar was a retailer offering a free disc out of a choice of a hundred or so, if you spent a certain amount. Really, that’s more of a buy two get one free, but it’s the way that it was set up that made it feel like you were getting a free disc, not a discount on three. Perhaps it was the choice of free discs that made it feel that way, because I spent a good couple of hours trawling through that list of discs, and in the end, the only one I felt comfortable in accepting as a freebie was this, A Million Ways to Die in the West. Everything else looked far worse.

Albert Stark is a man before his time. He’s a milquetoast who likes to avoid confrontation, and would much rather have a peaceful life with his girlfriend Louise. His problem is that he’s a sheep rancher in Old Stump, Arizona in 1882, the frontier of the West, where life is cheap, and men talk with their fists or their guns. One cowardly performance too far, and Louise leaves him for Foy, the town’s moustachier. In a lunatic move, Albert challenges Foy to a duel, although he’s never fired a gun before. Luckily for him there’s a new arrival in town, a woman named Anna who takes a liking to this gentle sheep farmer, and more, she also knows how to shoot. She might be able to teach him enough to deal with Foy, but he’s in no way ready for her husband, the bandit Clinch who also happens to be the meanest gunman around.

You have the choice of the theatrical version (115:54) and the unrated cut (134:44) and for the purposes of this review, I watched the longer version.

A Million Ways to Die in the West gets a 2.40:1 widescreen 1080p transfer with DTS-HD MA 5.1 Surround English, and DD 2.0 Stereo audio descriptive English, the latter only on the theatrical cut. There are also English subtitles should you require. The image is clear and sharp, presented with no issues, and the widescreen format certainly delivers the Western imagery you’d expect, with a whole lot of Monument Valley making its presence felt. The audio too is immersive and effective, with a suitably Western score driving the story. The dialogue is clear which you’d expect in a comedy, but what’s disappointing is the sterile digital look to the cinematography, and an odd choice to flatten the colour palette. You certainly don’t get the sense of the baking hot desert temperatures the characters complain about.

You get one disc in a BD Amaray with a UV code within. The disc boots to a static menu.

On the disc you’ll find the following extras and featurettes.

Finally there is a commentary from writer/director/producer/actor Seth MacFarlane, writers/executive producers Alec Sulkin & Wellesley Wild, and actor Charlize Theron. This has been edited for both versions of the film.

Damn you Orville, you twisted my expectations! I never really liked Seth MacFarlane as a comedian, not that I had seen too much of his output. A little bit of Family Guy and a couple of chat show appearances were enough to alert me that this wasn’t my thing. But then I went and watched The Orville, and wound up charmed by its homage to Star Trek The Next Generation. It was enough to start me thinking that maybe I was being unfair to Seth MacFarlane, that all I really needed to do was get the joke.

I didn’t get the joke. Certainly not with A Million Ways to Die in the West, which was just dire. When you laugh just six times in a 2 hour and fifteen minute comedy, when you’re spending time counting your laughs instead of watching the movie, then you know that this is a stinker and should be avoided at all costs. Watch Blazing Saddles instead, watch the two “Support Your Local...” movies with James Garner, watch Cactus Jack, watch some real Western comedies instead of this dross.

It’s essentially the same joke as the Orville, looking at another world or time through contemporary 21st Century eyes, and while it worked in the Orville for season 1, began to feel tired in the second season, in A Million Ways to Die in the West, the anachronism of 19th Century people with modern outlooks just didn’t work for me. These were observational gags that belaboured the point, as if there were neon lights flashing with every joke to make sure the audience were indeed aware that these were, in fact, the jokes; although not nearly as forced as the cameos, including a painful turn from Bill Maher.

And there is the toilet humour, which is copious. Admittedly one laxative induced scene was funny, until it stopped being funny and just started being sick. The film would probably be ninety minutes long if it didn’t try to sell every joke with the intensity of a televangelist. The thing is that there is a nice movie in there somewhere, every so often there would be a moment that would grab my attention, maybe evoke some emotion, even if it was just sympathy for one of the characters, but it would squander that goodwill in the next scene. A Million Ways to Kill a Joke in the West gets a passable Blu-ray, but the film itself just doesn’t pass muster.