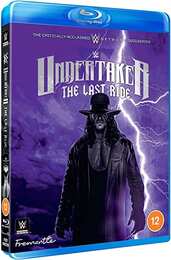 The Undertaker is one of the greatest of all time. Whether you saw him as the Deadman, The American Badass, Leader of the Ministry of Darkness, he was a character who evolved over the last thirty years and it is amazing that a ‘character’ could survive that long. Most gimmicks had a shelf life that latched onto a zeitgeist, theme or trend, but this is one that every few years changed and adapted and could easily have carried on forever.

Sadly, that is not to be and this documentary series The Last Ride is a clear indication that this is the final time we will properly see The Undertaker. He will not be like Mick Foley or Terry Funk and retire and return every few years for a pop and a paycheck. The Undertaker has established a legacy and in ending it has finally put the nail in that coffin.

Over the five episodes we get a brief overview of the career of Mark Calloway, the man behind The Undertaker and we see how he went from strength to strength establishing himself as a Franchise player for the WWE and during the Monday Night War the one constant. Debuting at the 1990 Survivor Series he went on to have an illustrious Hall of Fame-worthy career racking up Seven World Championship reigns, Six Tag Team Championships, a Royal Rumble win, Four PWI Match of the Year awards and has gone against the best in the business, racking up the infamous Twenty-One Win Streak at Wrestlemania. It seemed as though he had done it all, but when watching this documentary Mark Calloway is a man who is deeply drawn and loyal to the business and to line from The Godfather Part 3 ‘Just when I think I’m out they pull me back in.’ is very apt.

Throughout we see how injured he is and how many surgeries and treatments he has to keep himself together. I have always been critical of how The Undertaker could be out for nearly a whole year, come back and yes have an amazing match, but only work once a year and still get a massive pay. However, this documentary really did open my eyes to just how hard it is for him to get back in the ring. It was heartbreaking at times to see his wife, former Divas Champion Michelle McCool break down while discussing how much pain he is in and it made me reflect on others like him such as Andre the Giant, Mick Foley and others who did exactly that. I am glad that this story doesn’t end with stories of pain medication and substance abuse and this does not seem to be something that The Undertaker took part in, which was a relief.

Across the five episodes we see how he prepares for certain matches and it shows just how disappointed he was in the Roman Reigns match at Wrestlemania 33 and despite being a good match it just didn’t live up to his expectations. This is a running theme of The Undertaker returning having a few great matches and then instead of retiring having a so-so match that didn’t live up to expectations.

His match against John Cena is seen as a great return, only too short and when he has an excellent match at Extreme Rules 2019 with Roman Reigns against Shane McMahon and Drew McIntyre he declares that he is done and that is as good as he will ever be again. You see this interaction with Vince McMahon backstage who seems to brush this off with a ‘We will talk about it later’. His loyalty to McMahon seems to be something that has him under a spell and he does come back only to have an average match against Triple H, a horrendous match teaming with Kane against Triple H and Shawn Michaels and then one of the worst matches in his career against Goldberg which could have almost ended his life, never mind his career.

However, I would say this is one of the things that irked me about this documentary was their editing of the truth as the above is not actually what happened. He had the three awful matches first, before redeeming himself in the Roman Reigns match. I understand why they did it as they wanted to fix on the fact that he was never satisfied when he had a horrible match, but that is not what happened.

We see Mark Calloway declare he was done and the last ‘match’ would be against AJ Styles. This became the infamous Boneyard Match, which on reflection I enjoyed much more looking back on it than I did watching it live. Both could have put on a great match (earlier in the documentary you see Taker backstage commenting on how he would have loved to have worked with Styles) and the whole production and how it was put together was just great.

Throughout all five episodes we get to hear from so many of his peers from Mick Foley, Triple H, Bruce Pritchard (Who was his first Manager as Brother Love), Vince and Shane McMahon amongst many others and it is clear from everyone that he was as much beloved outside the ring as the fans loved him in it.

My only real disappointment with this set is the lack of matches or anything specific in regards to extra features. I was expecting this to have a few matches, maybe a look at some of the matches talked about in the documentary, but nothing is given. Seeing more of his promos and maybe more bloopers would have been great.

Instead we get some pretty good extra moments, possibly could be described as ‘Deleted Scenes’ with the likes of JBL, Stone Cold and look at his use of Cryotherapy, how his entrance was so iconic, his appearances for Make-A-Wish and at Raw 25 are all fine and could have easily have been added to some of the episodes. IT is his ‘Favourite Opponents’ feature is great and I only wish that more was made of this or indeed matches included from them.

Also included is a Bonus Episode called ‘Tales from the Deadman’ which is a bit like the WWE Network show Storytime and is an animated retelling of some of Undertaker’s more wackier moments and are all great. I could easily watch a whole series about this.

Undertaker: The Last Ride is a fitting tribute to one of the greatest of all time. It is true that he may not have been as world-famous as Hulk Hogan or as critically praised as Ric Flair, but when it comes to some embracing a gimmick and making it work this is the best example of this. I found this series a delight to watch and when most of the wrestling documentaries are sad a dn bleak it is nice to watch one with itys star riding off into the sunset. I will not deny that I will miss hearing the gong go off in an arena, but I am glad that it happened and this is a legacy that will never Rest In Peace.