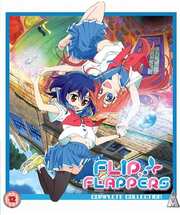 From one double-dip from DVD to BD to the next, and for exactly the same reason. When I reviewed Girlish Number, I noted that it had come during that period when Sentai had stopped releasing DVDs, and companies in the UK and Australia had to find some other way of appeasing that dwindling customer base. With Girlish Number MVM had used Madman’s DVDs which were less than their best. By the time Flip Flappers came around, even Madman had thrown in the towel, and reviewing the Flip Flappers DVDs for MVM, I had to cut them a lot of slack, as to the best of my knowledge, this was the only time that MVM authored anime DVDs for the UK themselves. But really, there were issues with the transfer when it came to compression artefacts, and the subtitling was a pain. I had placed an order for the Blu-ray before I’d even started writing that review, but it’s taken this long to get around to watching it. 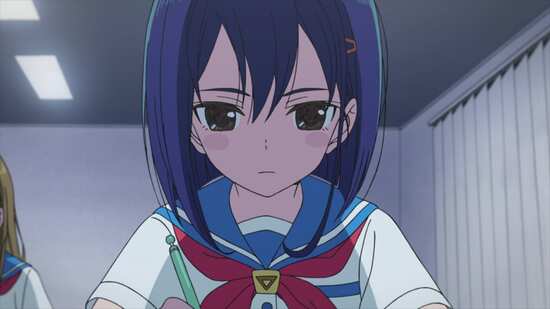 Papika is an energetic girl with a flying surfboard who works for the Flip Flap organisation, along with a robot called Boo-chan. Cocona is a proper school girl who lives with her grandmother, and only wants a normal life. A normal life isn’t going to happen, as together, Cocona and Papika’s hearts have the right impedance to open a portal to the world of Pure Illusion, and Flip Flap needs the girls to go through the portal and retrieve the Shards that are released when dangerous evils are defeated. Gather all of the Shards and a wish will be granted. The problem is that Pure Illusion offers a different reality each time they go through. The real problem is that there is a rival after the Shards as well, aiming for world domination, a rival that Cocona knows very well, or she thought she did. 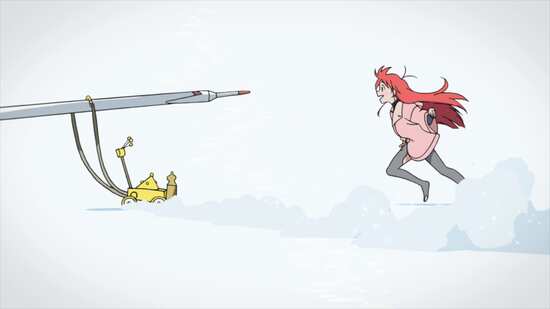 13 episodes of Flip Flappers are presented across two Blu-rays as follows. 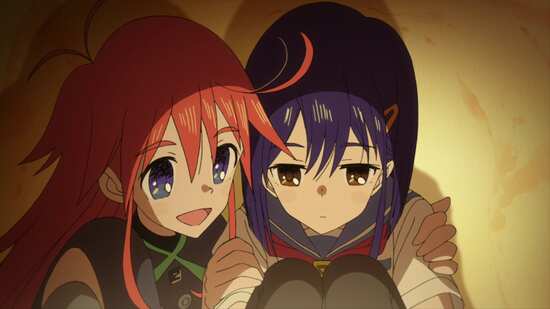 The 1.78:1 widescreen 1080p transfer on these Blu-ray discs is a completely different experience from the DVDs. The image is clear and sharp, there is no visible compression, and this time I noticed a sense of grain applied to the colour shades which I didn’t see before. The line art looks spectacular, and the animation is energetic and fluid. Most important of all compared to the PAL DVDs, the animation here is at the correct frame rate. About the only niggle might be the usual light banding that you get on HD anime. But the Blu-ray is definitely the way to go. Flip Flappers is a singular animation, wacky and psychedelic at times, with the random nature of Pure Illusion allowing for several animation styles. The character designs are perky and cute, but comparatively simplistic. Flip Flappers has a GAINAX feel to the character and world designs, which suits the zany nature of the story well. 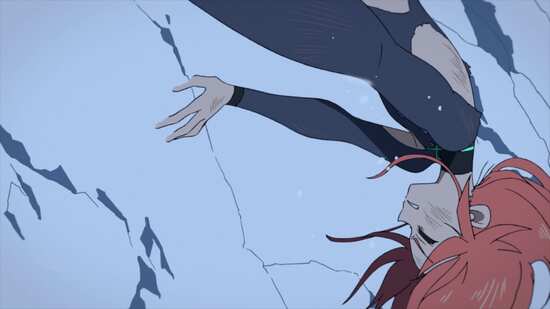 You have the choice between DTS-HD MA 2.0 Stereo English and Japanese with player locked subtitles and signs. Unlike the DVDs, these are the Sentai discs repurposed for Region B, and the subtitles and captioning is up to their usual standards. I went with the Japanese audio again, and was very happy with the experience, the actors are suited to their role, the show gets some great music, and the action comes across with impact, especially when the stereo is put through a Prologic decoder. The subtitles are accurately timed and are free of typos. 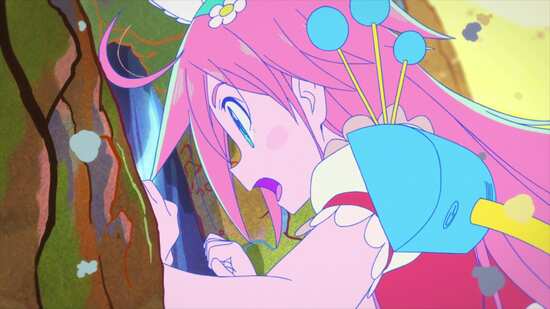 You get two discs on each inner face of a BD Amaray.

The discs boot to static menus, and each episode is followed by a translated English credit scroll.

The extras on disc 2 comprise the textless credits and trailers for Flying Witch, Chihayafuru, Tanaka-kun is Always Listless, and The Squid Girl. 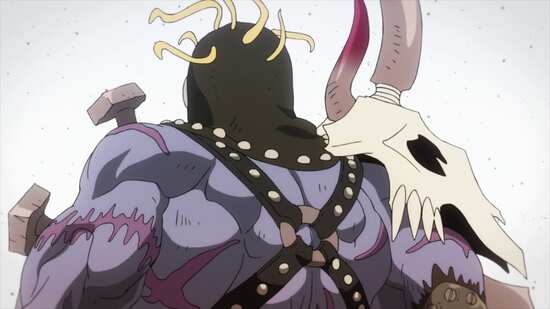 There are some constants in the magical girl genre. There will always be some evil to defeat, which will leave a Maguffin behind for the magical girls to collect, a Maguffin that will grant a wish or something positive. There will be a rival magical girl also collecting the Maguffins for a more ominous purpose. In reality, the magical girl and her rival, or their alter egos will be best friends at school. It’s what a magical girl show does with this premise that will make it memorable and a classic or just plain disposable fare. Flip Flappers is definitely memorable, could very well be a classic, and even given its clichéd and well-worn premise, does things with it that make it feel fresh and original. 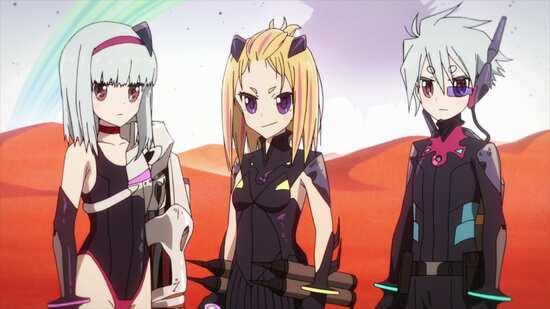 It begins in media res, with a girl on a flying surfboard encountering a schoolgirl who wants to remain nondescript, and then dragging her off on adventures to the world of Pure Illusion. There’s a whole lot of back-story to these characters, the Flip Flap organisation they work for, and the allies and rivals they encounter, but rather than an exposition dump, Flip Flappers ensures that you learn all this back-story naturally, as the episodes unfold. And the back-story, who these characters are, and where they came from very much lies at the heart of Flip Flappers, informing the whole narrative. 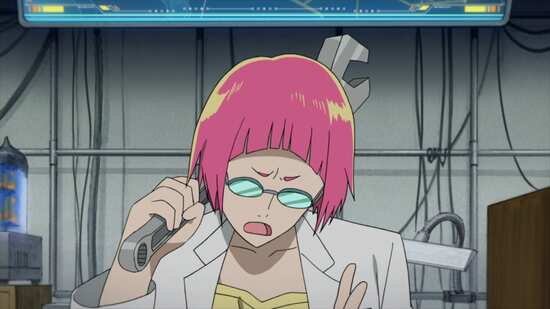 In this particular Magical Girl story, the evil that they fight, the Maguffins, the Shards/Amorphous that they have to collect all dwell within a parallel world called Pure Illusion, or rather parallel worlds. Every adventure that Papika and Cocona go on takes them somewhere new where the animators’ and storywriters’ imaginations can run riot. It can be a winter wonderland, a world where they are bunny girls, a barren Mad Max desert world, a spooky version of the real world, even time-travelling into another girl’s past, and more. There’s variety and imagination here that put me in mind of a cross between Space Dandy and Magical Shopping Arcade Abenobashi. 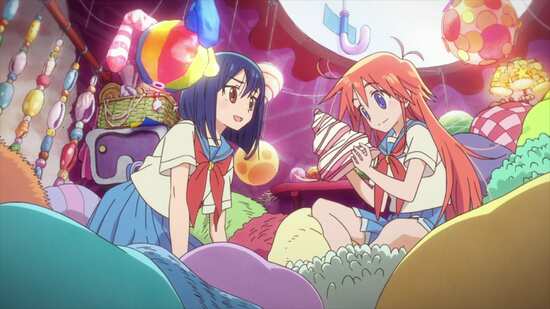 The characters are really interesting. Cocona’s a quiet girl who wants a simple life living with her grandmother, and at first doesn’t appreciate this energetic firecracker Papika showing up and dragging her off on adventures. They have to be together, as only their hearts resonating will open the portal to Pure Illusion, which is good for Papika, but not so good for Cocona. In the manner of such shows, there are mascots as well, a robot called Boo-chan who goes with them on their adventures, and Cocona’s weird green rabbit-thing called Uexkul. Cocona’s best friend is Yayaka, an outgoing and friendly girl who is hiding more than one secret (remember what I said about rival magical girls?). And there are organisations, plots and schemes behind the whole thing working against each other to collect the Shards. 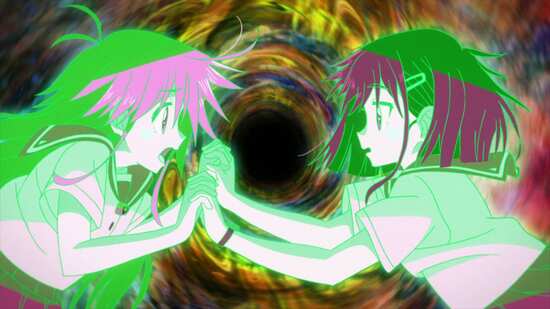 I would really love to tell you more about the characters, who they are and how they interrelate, but for once in a show, the spoilers lie not only in the story, but in the characterisations. Flip Flappers is like a coming of age Magical Girl show, in that the adventures that Cocona and Papika go on, are key to them discovering who they really are. In this regard, Flip Flappers turned out to be a very satisfying show, despite all the distraction the visual excess could have posed. It’s very much a show worth watching. 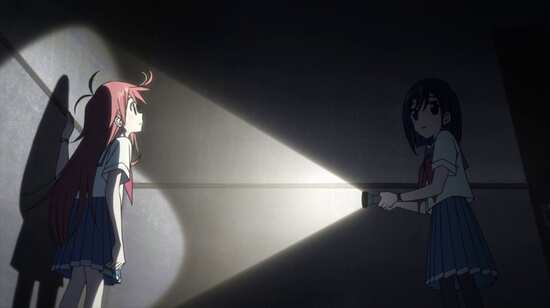 And on Blu-ray it’s worth watching even more, as the show is presented as it should, be, with HD clarity and decent and legible subtitles. It’s a far better watch when you’re not being distracted by niggles in the quality of the transfer, and I was wholly into the show this second time around, and enjoyed it even more. It turns out that there is even more to the story that reveals itself with a second viewing, and that bodes well for subsequent re-watches. Flip Flappers was a standout release from 2018, and if you’ve missed out so far, you really should take a look.