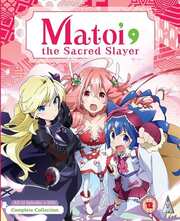 It turns out that I can be just as lackadaisical reading my own reviews as anyone else. When it came to double dipping the DVDs to Blu-rays, I went through my old reviews, and I guess I just looked at the overall score instead of reading it through, trusting my instincts from the first time I watched it. After all with Matoi getting a 9/10 from me the first time round, I figured it must be really good, and I placed an order without blinking. Now if I’d actually read the review of that DVD through, I might have hesitated at the technical bits. Turns out it’s a good thing I didn’t read them then... 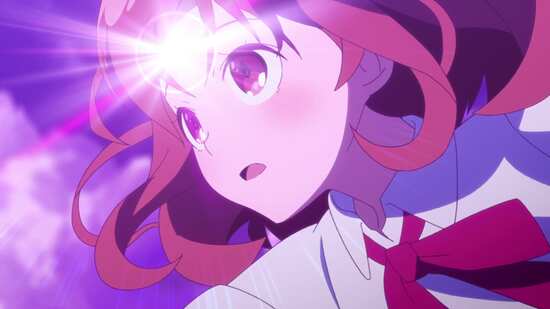 All that Yuma Kusanagi wanted was to inherit the legacy of her family of priests and shrine maidens, and gain the god power of an exorcist as well. Seeing that it isn’t her name in the title of the show, it shouldn’t come as a surprise that when she performed the ritual of summoning, the god power went to her best friend Matoi Sumeragi instead. All Matoi wanted was a normal, schoolgirl life, but now she’s transforming into a powerful exorcist (being left naked when transforming back), and supposed to fight dark beings called Nights, which come from higher dimensions to possess unwitting humans on Earth with deleterious effects. And seeing that there is already an organisation, the Fatima group from the Vatican whose duty it is to fight the Nights, things are going to get very complicated indeed. 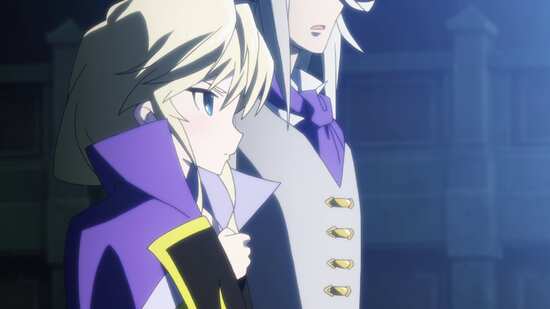 The thirteen episodes of Matoi the Sacred Slayer are presented across two Blu-rays as follows. 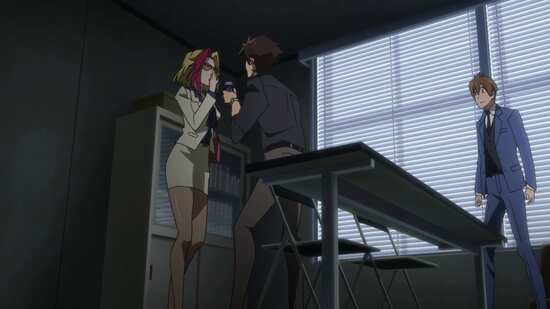 When I watched the DVD version of Matoi, I certainly noticed the animation as being rough and ready in places, and also attributed some of the problems with the transfer, aliasing, shimmer and a lack of detail to the source animation. I just didn’t realise how bad the DVD transfer was, as most native Sentai DVD discs look pretty good for the format. It turns out that Matoi the Sacred Slayer was in fact one of the rare bad ones. You can’t do anything about the simplistic animation, which in style and in execution makes the show look older than it is, but the 1.78:1 widescreen 1080p transfer on the Blu-ray really is back to normal service for HD anime. It’s clear and sharp; the animation is smooth, with no signs of compression, or that aliasing that so tainted the DVD. The line art is fluid and unmarred, and the colours that seemed flat on the DVD are vibrant and really pop on the Blu-ray. Detail levels are good, and about the only issue is the usual slight digital banding on occasion. 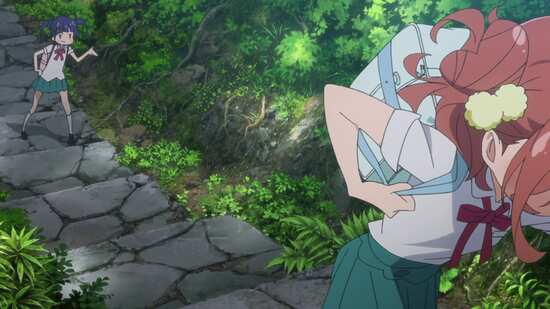 This is a subtitle only release, DTS HD MA 2.0 Stereo Japanese with the subtitles locked during playback. The audio is even better on the Blu-ray, full, rich and resonant, offering a nice degree of spacial separation to bring across the show’s action and music. The dialogue is clear, and the actors are well suited to their roles, delivering spirited and engaging performances. Matoi also gets some strong music, and while the theme songs may be forgettable, the incidental music is grand and theatrical when required, really living up to the epic and emotional nature of the story. The subtitles are timed accurately, but I did notice a couple of typos towards the end of the series. 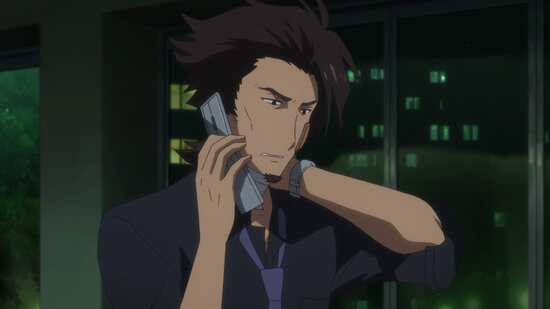 You get two discs on each inner face of a BD Amaray. The discs present their content with static menus while each episode is followed by a translated English credit reel.

The extras are all on disc 2. This has the textless credits, 2:53 of Japanese Commercials, 7:19 of Japanese Promos, and trailers for Amagi Brilliant Park, Kokoro Connect, Valerian & Laureline, and My Love Story!! 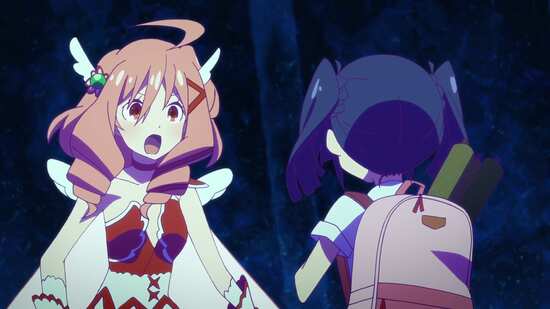 There is also the bonus episode (separate from the OVA episode listed above). This lasts 23:23, and is basically a recap episode for the whole series, as narrated by Yuma. It’s a little odd, as recaps usually happen in the middle of a run, when deadlines are missed, and episodes can’t be delivered on time to the broadcaster. This one is a recap of the whole series and was obviously made after the run. It also means that Matoi is bookended by disappointment, although you have no compelling reason to watch this as the conclusion. 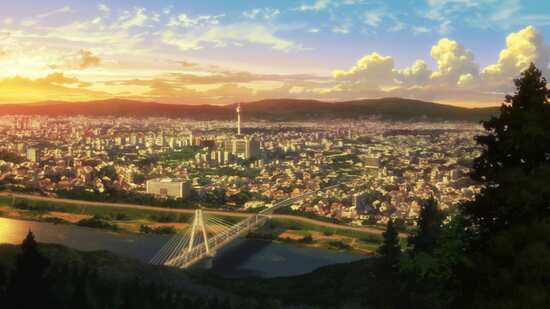 Bookended by disappointment! You can ignore the bonus recap episode, but there’s no getting away from the start of Matoi the Sacred Slayer, which is deceptively naff. It’s here that the quality of the animation is at its worst, although while it improves over the series, it never gets to what you would expect from modern anime. More significantly it’s here that the story is at its weakest, a rather clichéd magical girl set-up, some questionable humour, and an emphasis on fan service that thankfully is confined to this one episode. There’s only so much time in the world, and a whole lot of anime, and plenty of people have a tendency to give a series just one episode to hook them, before ditching it as a bad deal. If you were like that when Matoi the Sacred Slayer was streaming then you really should give it another chance, as while I haven’t seen too many Magical Girl shows, I have to say that this is one of the best that I have seen. 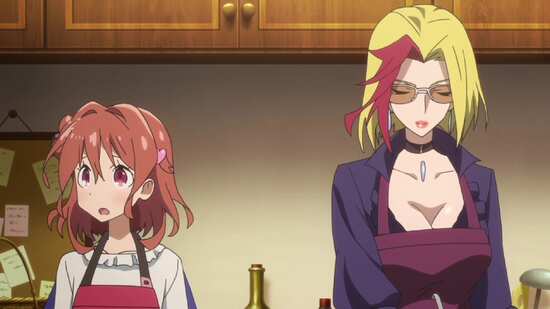 The premise itself, well in many ways it’s window dressing, the particular jargon and worldview that separates it from all the other magical girl anime, and which get you investing in this particular one, make it your favourite. This particular anime world is one of multiple dimensions, with reality inhabiting the lowest four. Beings from the higher dimensions, so called evil spirits come down to Earth to wreak havoc, possess people, and try to make their plans come to fruition. There are other higher dimensional beings, ‘gods’ that form ‘Divine Unions’ with compatible girls, and those girls can then transform and fight the evil spirits, the so-called Nights, and drive them back from whence they came. Of course this means flashy costume changes and plenty of visual effects. 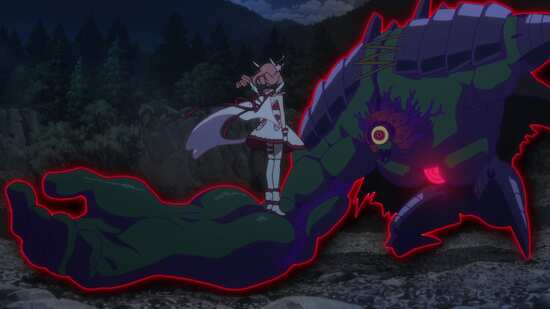 There are three factions on Earth battling the Nights, the shrine maidens of the Tenman shrine and related shrines who achieve Divine Union spiritually, and of whom Yuma and Matoi are members, the Fatima group from the Vatican who achieve Divine Union through technological means, and who Clarus represents, and the IATO group who are investigating these incidents, and as the story begins, they aren’t exactly affiliated. 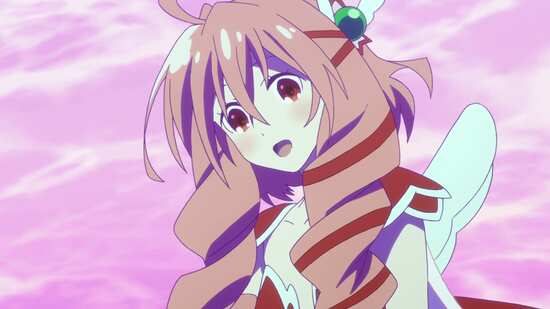 It seems that Magical Girls always come in threes, and this show is no different in that respect, with three very different characters driving the series. The title character, Matoi Sumeragi is the reluctant hero. All she wants is a normal life, having recently been reunited with her father Shingo, and having grown up without either of her parents, her mother Shiroi having left when she was young. The last thing that she needed was Yuma’s incantation going wrong and the ‘god’ joining with her instead. And she’s got the most powerful Divine Union going, which means that even more emphasis is on her doing battle with the Nights, as well as the embarrassment of winding up naked every time her powers wear off. 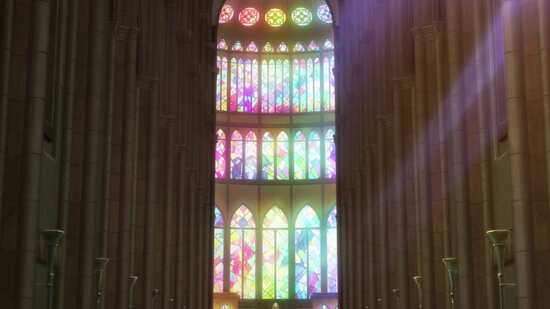 Yuma Kusanagi wanted the powers that got given to Matoi instead, because she’s blessed with an up-and-at-‘em attitude and an ambition to be heroic and famous. Thankfully she’s a good and supportive best friend to Matoi, even if her support can be too enthusiastic. And she eventually gets rewarded with a Divine Union of her own. Clarus Tonitrus is the career magical girl, been raised to fight Nights by the Fatima group and the Vatican, and with an emotionless, businesslike attitude, a denial of pleasure, and all driven by a desire for revenge. She doesn’t think much of the other two at first, who apparently got their powers by chance, and who in the case of Matoi doesn’t even want them. Of course as the story unfolds, the three wind up working as a team, and eventually become strong friends. 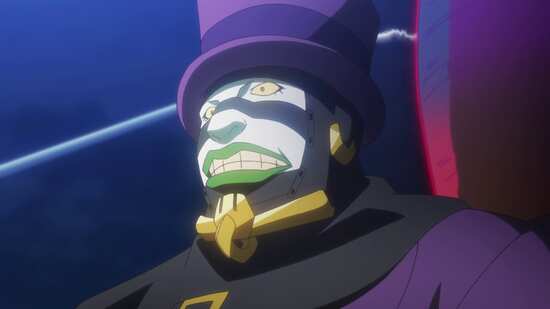 Matoi the Sacred Slayer benefits from excellent characterisations, and perfectly pitched writing. This is a show that really does grab the viewer attention and keeps them hooked for the duration. But its masterstroke is that it really isn’t about the flashy exorcisms, the Nights, and the magical girls at all. The central arc of the story turns out to be about a young girl’s relationship with a father who has been absent too long from her life, and how both of them have been affected by the disappearance of her mother. Matoi the Sacred Slayer is a show about family, and when you’re telling stories, it is the most fundamental things that people relate to most. I don’t mind saying that Matoi the Sacred Slayer got me in the emotions, and it had the best possible ending to the story. And then they go and make an OVA episode that is a hilarious Ghostbusters parody... 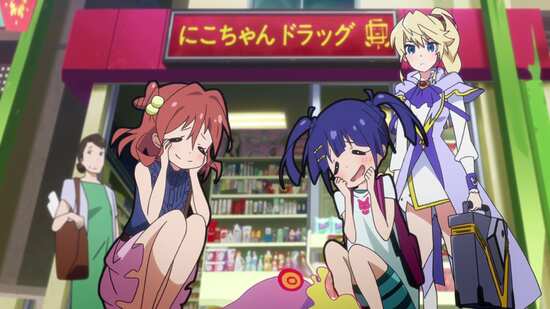 For my second time around with Matoi the Sacred Slayer, quite obviously the novelty had worn off, and I have to say that the Ghostbusters spoof OVA episode at the end didn’t quite charm me in the same way, so I was really feeling the ‘bookended by disappointment’ vibe. But the main story is really very strong, with the family drama playing even more prominently. It may be a frivolous magical girl show on the surface, but there is enough underneath to make watching Matoi the Sacred Slayer really worthwhile. And better, this Blu-ray has none of the issues with the transfer that so marred the DVD experience for me.