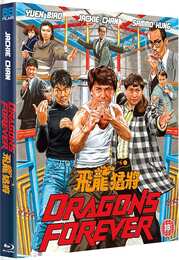 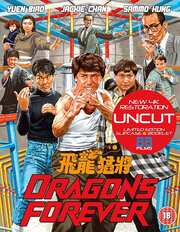 Synopsis:
The Three Brothers are back! After Project A and Wheels on Meals, the most popular action stars in Hong Kong – that's Sammo Hung, Yuen Biao and the superstar Jackie Chan himself – join forces again for another uproarious adventure.

This time, the heroic trio are facing down a crooked industrialist and an organised crime syndicate bring drugs into Hong Kong. Can they stop it? Well, obviously – the real question is how crazy things get while they do it!

This was the last time the classic team performed together and it's one of their best outings, filled with fights, stunts and – yup, you guessed it – more fights. 88 Films are proud to present the UK blu-ray premiere of this action masterpiece remastered and restored in 4K.

• Full CYCLONE Z Cut of the Film [98 mins] [Produced exclusively for the Japanese market, this Cantonese-language version includes two extra scenes and an ending with outtakes].
• Recreated Export Version of the film [94 mins] [Commissioned by Golden Harvest for international audiences outside Asia]