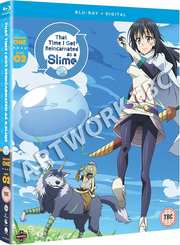 That Time I Got Reincarnated as a Slime: Season One Part Two (Blu-ray Details)

Article
In The Name of the King: Two Worlds comes to Blu-ray and DVD in May
Recently Added Items

Review for That Time I Got Reincarnated as a Slime: Season One Part Two

Isekai isn’t my favourite genre, but when That Time I Got Reincarnated as a Slime Part 1 was released last year, I developed quite a fondness for this ‘lost in a fantasy world’ show. It resembles Overlord at first glance, but really drew my attention because of a sympathetic cast, and more importantly, a sympathetic main character. While I did have a futile hope that it wouldn’t go the overpowered god route, it did manage to maintain that likeability through to the midpoint. The only problem is that it’s been quite a while since I watched Part 1, and in the interim, Saga of Tanya the Evil came out, which I liked a bit more. That Time I Got Reincarnated as a Slime has some catching up to do... 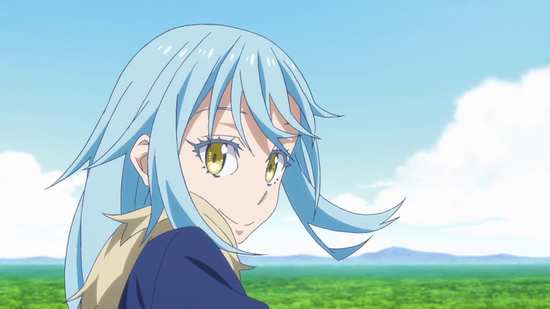 Satoru Mikami is a 37 year old salaryman, whose life is going great, except for the lack of any kind of relationship. It irks a bit when his co-worker calls him to introduce his new girlfriend, but that doesn’t stop him when a knife-wielding mugger attacks. Satoru intervenes, and gets stabbed. He manages to get his dying wish across, but as his consciousness fades, he hears a strange voice. 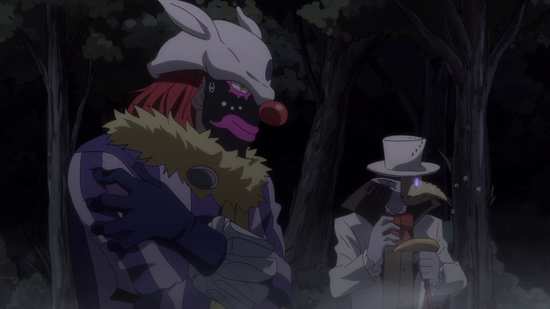 Then he wakes up... in a cave... as a slime. The only companion he has is that voice, the voice of the Great Sage still echoing in his mind. But his body is strange, his senses are curtailed, and it seems that all he can do is absorb that which he envelops. But the voice helps him understand his new life, as he explores the cave. It’s when he encounters a dragon trapped in the cave that his horizons begin to expand. No other slime has consciousness, and he’s also not the only out-worlder to come to this world, although reincarnation is unheard of. The dragon, Veldora Tempest becomes his first friend, and he gives the slime a name, Rimuru. Rimuru promises to free the dragon from his magical imprisonment, and that’s the start of an amazing adventure. 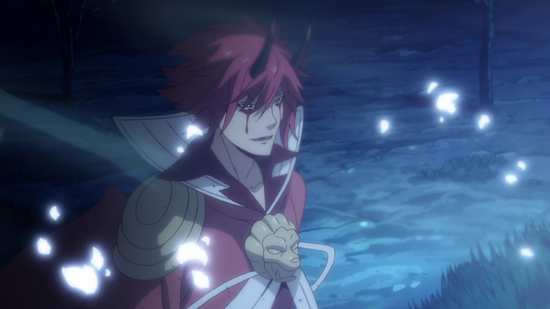 12 episodes of That Time I Got Reincarnated As A Slime are presented across two Blu-rays from Manga Entertainment in this Part 2 release. 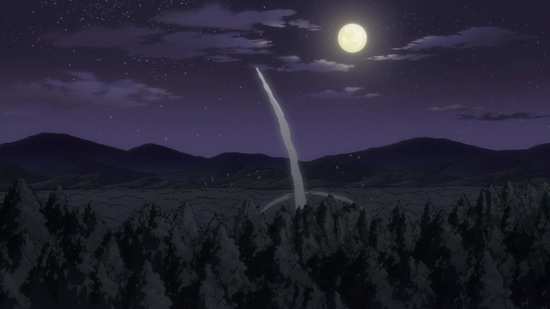 The show gets a 1.78:1 widescreen 1080p transfer, and it’s a good one. The image is clear and sharp, colours are strong and consistent, detail levels are accurately represented, and the only issue is some minor banding during the few darker scenes. That Time I Got Reincarnated as a Slime is a light-hearted comedy adventure show, so the colours are bright and vivid, the artwork is simple but effective, and the character designs tend to the cute and amiable. The animation is smooth, while effects are used well to establish the expected fantasy tropes. 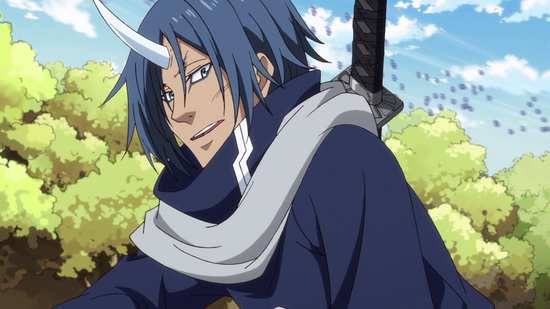 You have the option of Dolby TrueHD 5.1 Surround English with a signs only track, and Dolby TrueHD 2.0 Stereo Japanese with translated subtitles, all locked during playback. The audio is fine, the dialogue is clear, the music suits the story well, coupled with a pair of catchy theme songs, and the action comes across well, even in the Japanese stereo version that I watched. The subtitles are accurately timed and free of typos. 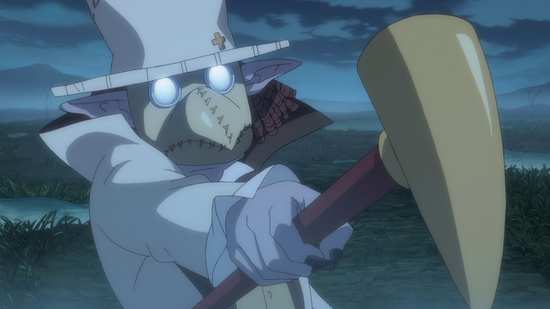 The discs boot to animated menus.

There is a commentary on episode 16 with Kent Williams (Rigurd), and Kristen McGuire (Milim), Ricco Fajardo (Benimaru), and Britney Karbowski (Rimuru). 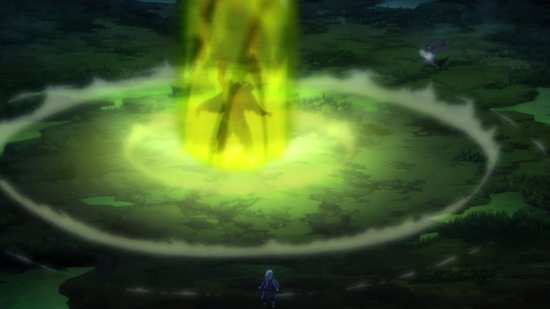 Disc 2 has the bulk of the extra features beginning with Episode 24.5 – Tales: Veldora’s Journal. Two of the beings that Rimuru has assimilated are the dragon Veldora, and the spirit Ifrit. When Ifrit showed up, Veldora co-opted him for a game of Shogi inside Rimuru, and this offers their conversation inside, while the action on screen re-caps the series. It’s an inventive way of doing it, and for once I watched a recap episode all the way through. This lasts 23:46. 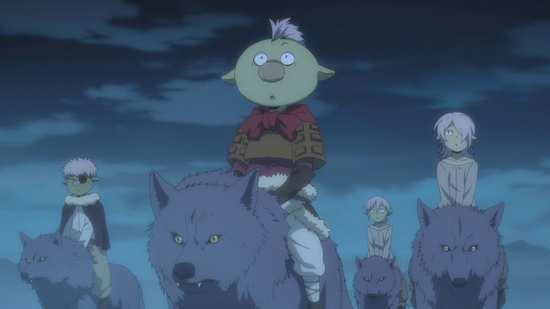 There is a video commentary on episode 14, with ADR Director Clifford Chapin, Austin Tindle (Gabiru), and Jim Foronda (Geld).

You get a 2.00 Promo Video, a 17-second Commercial, two textless credits and three textless endings (with locked subtitles), and that is the extent of the on disc extra features. 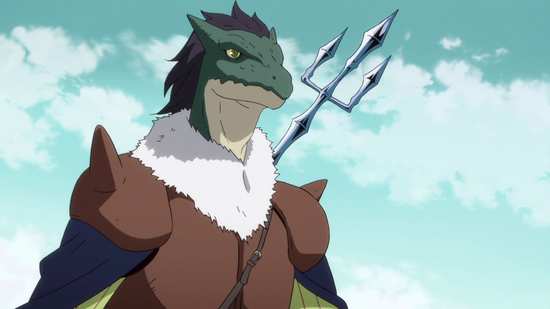 I shouldn’t like That Time I Got Reincarnated as a Slime. If I try and evaluate it objectively, it’s really not that good. It has some fundamental flaws to it, flaws that were apparent in the first half and certainly aren’t rectified here. It all boils down to a lack of drama. A businessman is reincarnated in a fantasy world, as a slime of all things, the lowest of the low, and he somehow manages not only to survive, but thrive as well. You expect every new challenge to be life or death, every decision made on a knife’s edge, but that just isn’t the case. This is a character for whom everything comes with ease, and this is a world where former enemies can be the best of friends within the space of an episode, with no grudges, and no recriminations. It’s a wish fulfilment story, an act of writing that is akin to playing with Lego. Yet, That Time I Got Reincarnated as a Slime works, and it does so because the characters are just so likeable, and the sense of warm humour that pervades the show is so amenable that you never regret spending twenty minutes with an episode. On the contrary, you begin to long for the next one. 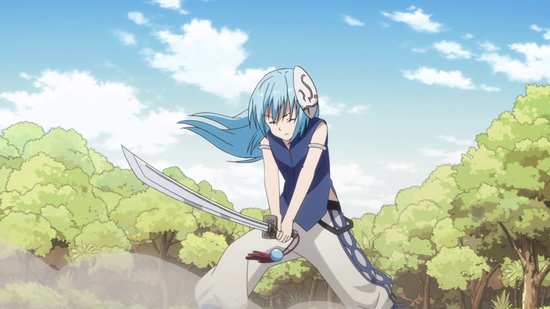 This half of the collection concludes the Orc Lord storyline that began in the previous half, and it does so in typically short order. It also has the reveal that the Demon Lords are behind these shenanigans, and could very well be Rimuru’s next challenge. As such, he forges an alliance between the races in the forest, formally establishes a nation, and starts politicking with the neighbouring kingdoms. The Goblins, the Dire Wolves, the Dwarves, the Ogres, the surviving and rehabilitated Orcs and the Lizardmen all join up. You have to love the character designs for the Lizardmen, their jaws are prominent enough, and articulated enough to emphasise to comic effect the jaw-dropping reactions to Rimuru’s prodigious displays of power. 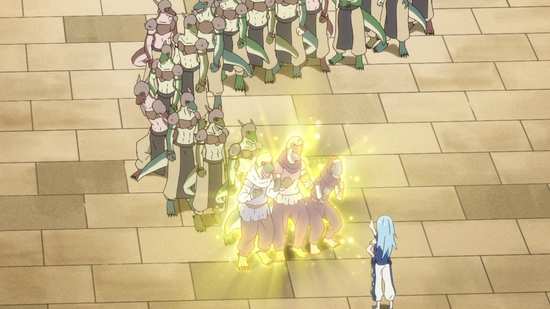 Then one of the Demon Lords attacks, Milim, who in appearance and in personality is a young girl, and who Rimuru subdues by making her his best friend, using his natural air of authority to curb her violent excesses, and showing her alternatives to war and conquest that might be fun. It turns out that shape shifting slimes are useful censorship in hot springs episodes. If Demon Lords weren’t bad enough, an epic monster appears, a giant flying beast named Charybdis with nothing but an instinct for destruction. 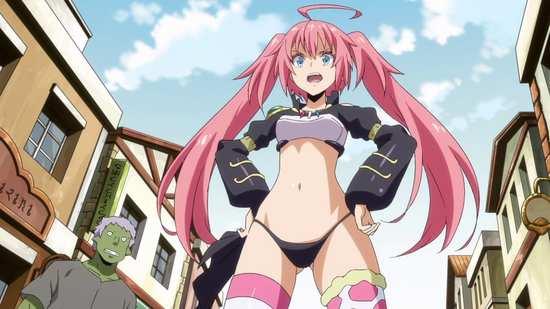 The final arc in this collection has Rimuru thinking back to the adventurer from his world that appeared at the start of the story, Shizu. Before she passed, she made mention of children summoned from their world that need taking care of. Peace current reigning in his kingdom, Rimuru takes the time out to visit the children and to keep his promise to Shizu. It needs keeping too, as by being summoned to this world at such a young age, the magic in their bodies has effectively sentenced them to an early death, and Rimuru has his work cut out trying to find a way to save them. Actually I lie. He manages it in the same way he manages everything else, with effortless ease. The final episode flashes back to an adventure that Shizu had, when a certain kingdom hired adventurers to do battle with a ruthless demon. It’s a standalone episode with a neat twist in the tale, but foreshadows developments in Rimuru’s story. As a second season of That Time I Got Reincarnated as a Slime is being broadcast later this year, it seems likely that we’ll see those developments too. 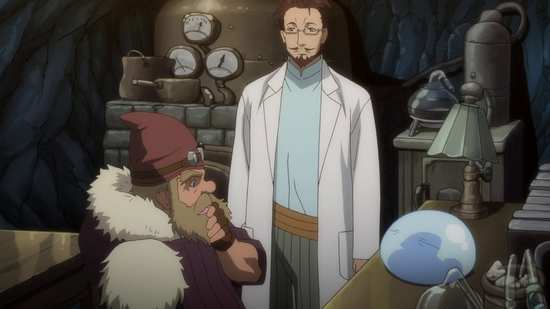