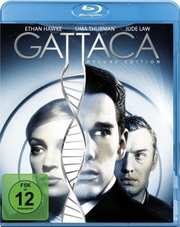 Article
Fringe: Season One out in September
Recently Added Items

Gattaca was released on Blu-ray in the UK, but annoyingly it was as an HMV exclusive, and that a couple of bankruptcies ago. I no longer have a branch near me, even if it were to have a copy, so when it came to the Blu-ray, I had to import. Not that should be too difficult, as I think it got the one disc worldwide, coded for all three regions. I imported mine from Germany for a very decent price, although by the time this review goes live, you’ll probably be paying import duty on top of that. But this is a film I have wanted in my collection since the first time, indeed the only time I saw it. It’s a sci-fi film that I found profoundly affecting, but as so often happens, the longer I leave between viewings, the more I begin to doubt my initial opinion. It’s been close to 20 years since I saw Gattaca. Is it still the film that I remember?

In the near future, the world has embraced the technology of genetics. Society has been split down the lines of Valids, and In-Valids, those genetically engineered for perfection, and those born naturally, the old fashioned way. Discrimination is illegal, not that it stops anyone from preferentially hiring people who are free of genetic ailments and imperfections, whose life-expectancies are off the chart, and who are designed to attain.

Vincent dreamed of the stars, but he was conceived the old fashioned way; stricken with short sight, and with a potential heart-condition that meant that he might not live to see thirty. There was no way that he was going to get into the Gattaca corporation and become an astronaut. But as Jerome Morrow he might. Jerome is a Valid, but one whose life was curtailed by an accident, confining him to a wheelchair. A meticulous scheme to give Vincent Jerome’s identity and get him through the regular screenings bring him to the verge of attaining his dream, but then the flight director at Gattaca is murdered. The subsequent investigation threatens to unmask Jerome...

This release is getting on in years; the disc dates from 2008 (although HMV only stuck the same disc in their release in 2017). The film gets a 2.40:1 widescreen transfer and you have the choice between Dolby TrueHD 5.1 Surround English, French, and German, with subtitles in these languages, Arabic, Greek and Turkish. The film could have used a little restoration on the way to the disc, but by and large the HD presentation is very pleasant. The image is clear and sharp, detail levels are good, black levels are balanced, and allow for well-defined dark detail without crush or blacks turning to grey. It all serves the look of the film well, which makes use of astounding and stunning Brutalist locations, excellent costume design and wonderful, gold tinted cinematography. There is a little softness to the image that could have been resolved by a 4k re-master, but I wasn’t disappointed by the film on this disc. Using European cars to invoke a sci-fi setting, Gattaca beat Caprica to the punch by over ten years! The audio is fine, the music and the action comes across well, making good use of the surround soundstage, while the dialogue is clear throughout.

You get one disc in a thin BD Amaray, and unfortunately the sleeve isn’t reversible, meaning you have to live with that large German ratings logo. The disc boots to an animated menu.

On the disc you’ll find a trailer for Close Encounters of the Third Kind, 30th Anniversary Edition.

The Original Featurette is in SD and lasts 6:52, the usual EPK behind the scenes featurette. But joining it is a mini-documentary, Do Not Alter, which lasts 14:52 SD. It looks at the science of genetics as it was back in 1997. It’s narrated by Gore Vidal.

Of more interest might be the Welcome to Gattaca featurette which lasts 22 minutes and is in HD. This retrospective was apparently created for the Blu-ray and features interviews with the cast and crew.

Finally there are the Deleted Scenes, 10:43 worth and 6 in total. They are in VHS SD quality, but are worth watching for some more great Ernest Borgnine scenes.

Gattaca is one of the best science fiction movies, something that is made all the more apparent by just how relevant and meaningful it still is, some 25 years after it was made. It was pure speculative fiction back in 1997, barely a year after Dolly the sheep was first cloned, but watching the film now it seems remarkably prescient. It’s also remarkable in that it’s a rare science fiction film that manages to tell its story without falling back on visual spectacle and big budget special effects. It doesn’t need explosions or CGI creations to compensate for a vacuity of intellect. This is a film that is smart enough to stand on its own merits, while its characters are rounded and written well enough to draw the viewer in, get us emotionally invested in the story.

One of the benefits of a tale about genetic engineering is that you don’t need the special effects to sell the story, but the production value is very much on screen, especially when it comes to the production design, the sets, and the locations. The technology is not visually that advanced, but there is a singular vision of style and ethos that separates the society in Gattaca from our own. With the elegant costume design blending old and new, and the beautiful cinematography, it’s clear that this film is not of our time.

Back in 1997, Gattaca may have been wholly looking forward with its tale of a society built on eugenics, although given the mapping of the human genome and those early experiments in cloning, it was less of a speculative exercise than something like Blade Runner with its replicants, but the film still felt wholly allegorical. Its message of discrimination and division in society down artificial lines could so easily be applied to any society, be it down race, religious or gender lines. Discrimination is a universal ill. But fast forward to 2020, and we’re halfway there. Thankfully we’re not too far down the genetic engineering road, although parents can now select for embryos if they’re screening out inherited conditions. We’re not at the stage yet where we’re switching genes on and off to choose hair and eye colour. But the other half of the film is there. DNA tests are common currency in police procedural dramas and the more salacious mid-morning talk shows. More importantly, our genetic propensity to certain ailments and conditions can be determined early on, and affect our life prospects when it comes to careers or health insurance. You may not get a day and date on your expected time of death, but you might get a percentage likelihood of any ailments that could cause that demise. Famous film stars make the news when they get elective surgery because they have the BRCA gene and a history of cancer in the family. We’re halfway to Gattaca.

What makes the film so fascinating to me is that it relies on the juxtaposition of character. Vincent is born an In-Valid, sentenced at birth by his natural born status to a short life of mediocrity. But he dreams big. He wants the stars. Yet it’s a competition with his Valid brother Anton that inspires him to pursue his dreams, when he beats him at swimming. He first comes to Gattaca as a cleaner, and his boss is a man named Caesar, an aspirational name for a man consigned to a career in sanitation. It’s when Vincent encounters Jerome that he gets his chance to make his dream a reality, by taking on Jerome’s identity, and his DNA in an attempt to cheat the system long enough to get on a space mission.

Jerome was an athlete, designed and engineered to win. His life ended, when he came second in a race, a defeat that he just couldn’t handle, and in his fragility he broke. Contrast him to Vincent, who all his life was told that he couldn’t achieve a thing because of his DNA, and he becomes driven to attain his goals no matter the price or the personal sacrifice. Yet between them a warm friendship forms. Then there are the investigators who look into the murder that happens at Gattaca, and so risk Vincent’s plan. The leader is obviously a Valid, meticulous yet by the book, while his underling is implied to be an Invalid, a man who relies on experience, and knows when to play a hunch, and understands that human nature still supersedes a calculated genetic propensity to violence. It’s clear that in any normal world, their positions would be reversed; even more so, the leader would be a rookie not a lieutenant, but this is a world where a genetic test takes the place of a job interview.

Good science fiction movies become great science fiction movies when the creators find the humanity that underlies the sci-fi concepts and visual imagination, and in this respect, Gattaca is one of the best. That what was once pure speculative fiction is now rapidly becoming science fact only serves to make Gattaca increasingly relevant. What’s annoying is that it never got a proper UK release, but as the disc is All Region, importing only makes sense.