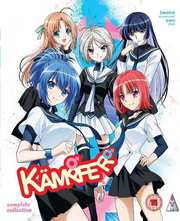 DVD
No Game, No Life Collection

Ever since MVM started putting Blu-rays in their deal of the week in the Anime-on-Line webstore, it’s been a lot easier to take a punt on one of their titles in HD, and having reviewed so many shows on DVD, it makes sense to upgrade them to the higher definition format. Naturally I go for those shows that I actually liked, which does leave me scratching my head at some of the double-dipped Blu-rays that wind up on my to-watch pile. After all, Kämpfer is about as pure a fan service anime as you can get, likeable, and watchable maybe, but not the first title that springs to mind when it comes to the double dip. Then I had a quick look at my review for the DVD, and realised why I upgraded. 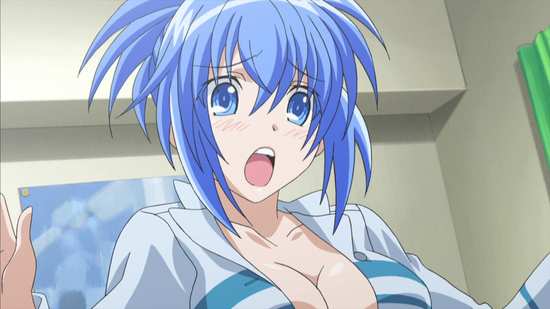 Kämpfer are legendary warrior women, called forth to do battle for... well that isn’t quite clear at the start of this series. What is clear is that their magical bracelets turn them from everyday people into warriors, armed with swords, guns, or Zauber (an internally generated energy weapon), and they’re supposed to battle each other according to what colour bracelet they wear; red vs. blue. Their Bowel Familiar plush toys (suicidal animal dolls with their entrails hanging out) come to life to guide, and generally annoy their owners in regards to the Kämpfer battles. 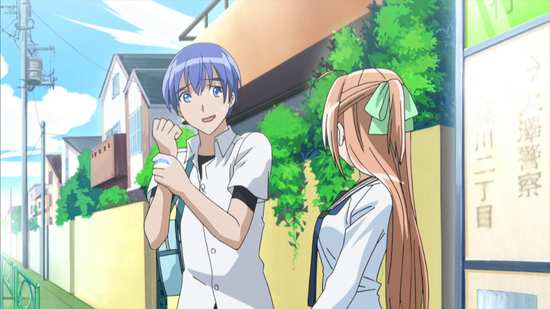 This shouldn’t be Natsuru Senou’s problem. After all, he is a guy, whose sole motivation in life is getting close to his neighbour Kaede Sakura, one of the beauties that attend his school. But the Kämpfer Moderator has a way around that too. When Natsuru’s bracelet activates, he actually becomes a girl, and he has no control over that process, whether it’s random, or triggered by the presence of another Kämpfer. And there are more Kämpfer at his school. The mousy librarian Akane turns into a flame-haired foul-mouthed gunslinger, and it’s fortunate for Natsuru that they are both on the same team. School President Shizuku wears a red bracelet, but rather than try to kill Natsuru, she’d rather torment him/her instead. She starts by insisting that Natsuru transfer over to the girls’ side of their segregated high school, where the tall blue-haired girl makes an immediate impact. And while Natsuru the boy is in love with Sakura, Sakura is in love with Natsuru the girl, and to top things off, Akane’s in love with Natsuru the boy, and as for Shizuku... Life is certainly getting complicated for Natsuru. 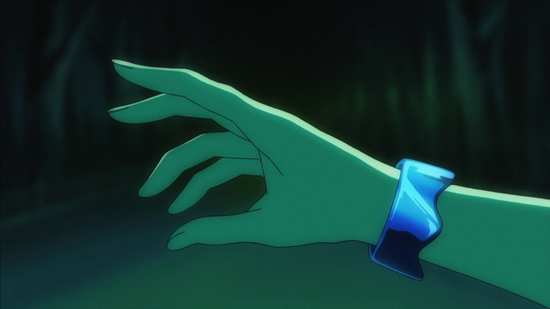 Kämpfer and its OVA spin-off Kämpfer: fur die Liebe are presented across two Blu-rays from MVM. 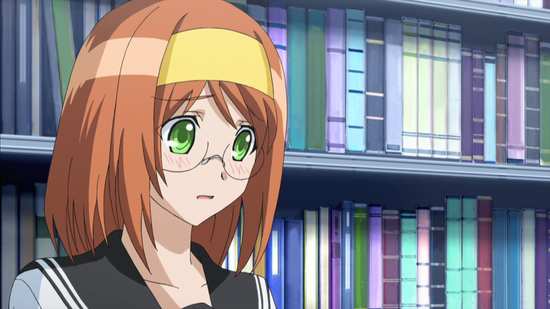 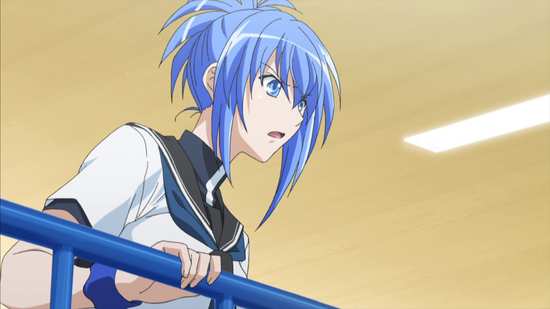 Kämpfer gets a 1.78:1 widescreen 1080p transfer on the Blu-rays, and compared to the DVDs, this is like night and day. The series DVDs were like old school discs from the early 2000s; soft, low resolution, prone to ghosting and artefacts, with only the OVA disc presenting the show to modern standards. The series on Blu-ray looks as it should, clear and sharp, with strong detail and colour, and with smooth animation. Brightness is a little high in some scenes, which affects black levels, but it’s still a major improvement over the DVDs. With fewer nits to pick about the transfer, the quality of the animation becomes apparent, and Kämpfer is a rather old school fan service show, with distinctive characters, but unimpressive character design, with plenty of focus on the female form. The animation does what it needs to, but the show rarely impresses, not that this sort of comedy really needs to. 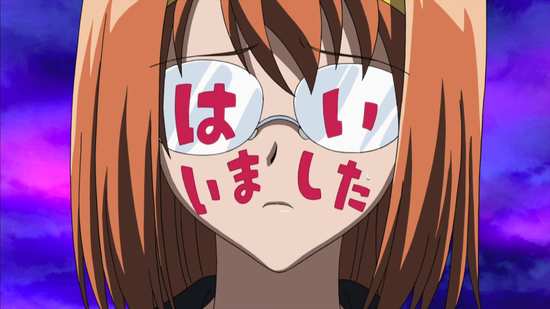 The sole audio track here is a DTS-HD MA 2.0 Stereo Japanese track with optional English subtitles. It’s as you would expect from an anime release these days, the dialogue is clear, the stereo does enough to bring to life the action sequences, and the audio is free of glitches and dropouts. The actors are well suited to their stereotyped roles, with the oddity of the same actress playing both male and female Natsuru. The subtitles are accurately timed and free of typos. 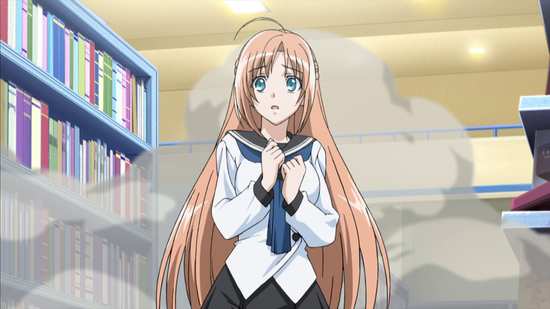 You get two discs on each inner face of a BD Amaray. The discs present their content with static menus and jacket pictures, and each episode is followed by a translated English credit reel. 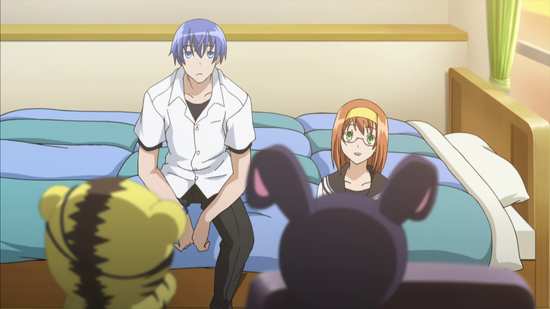 Disc 2 has the extra features, beginning with the Fantastic Bowels! short animation, which lasts 11:01, and is a picture drama, a scripted bit of comedy nonsense that has the three stuffed toys from the show debating their lack of cuteness. It plays like a radio drama, with static stills of the characters on screen when they are speaking, and it’s subtitled in English quite naturally. 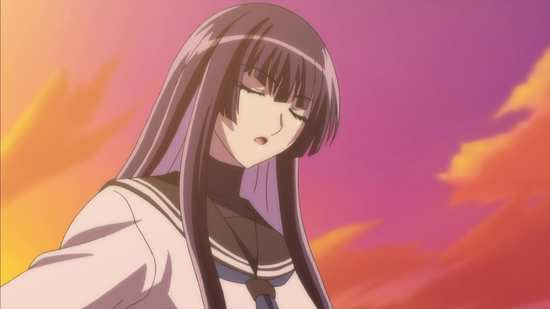 You have the textless credits for the OVA episodes, and trailers for Penguindrum, Mayo Chiki, MM, and Kill Me Baby.

If you want the textless credits for the TV series, you’ll have to stick with the DVD release, but that would be the weakest reason I could think of to do that. 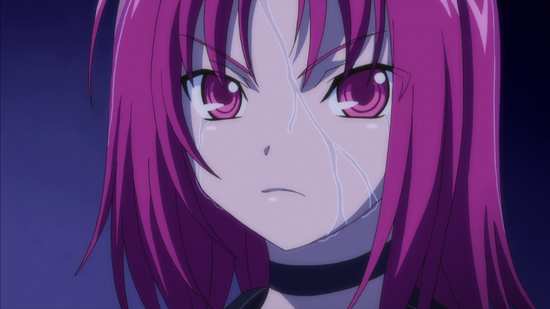 The second time around with Kämpfer and things take a plummet for the mediocre. There’s always a novelty value with new anime; indeed watching anything for the first time you get a little thrill of discovery that makes you appreciate something more. Now that I know what to expect from Kämpfer, the comedy is a little more stodgy, the characters a little more cookie-cutter, and the story rather pointless. I found Kämpfer to be a chore the second time around, an impediment that I have to clear before I can watch something more rewarding. It’s not an actively bad show, it’s just that it does nothing to inspire my interest until I get to the OVAs, and then only because the sauciness actually gets actively naughty instead of just pretending. 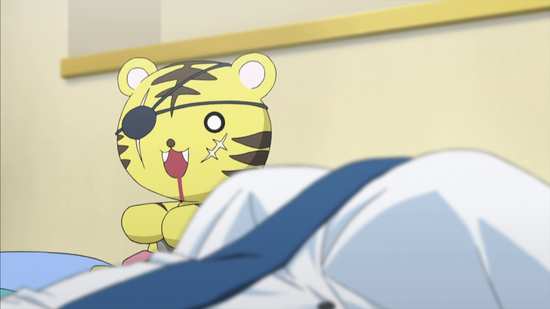 Kämpfer comes from the anime school of harem comedy, pretty standard except for the girls having to do battle against each other. We have girls who magically transform into warriors to do battle, and the hapless teen male is actually one of them, becoming female when called on to battle. This isn’t new in anime, if you’ve seen Ranma½, which also had a protagonist who could change gender at the drop of a bucket, which caused him no little hassle in the romance stakes. Kämpfer is passingly funny, not really bringing anything new to the table, but entertaining with its saucy antics, likeable characters (with multiple personalities), and some daft humour. It ticks all the right boxes if you’re in the mood for a harem comedy, and has enough energy to carry it through its run of episodes. 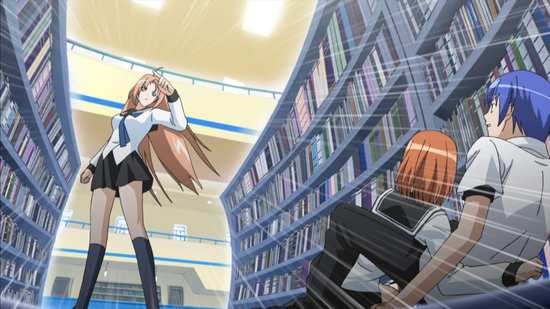 The sauciness obviously comes from a male character who finds that he’s randomly transforming into a female, and all the confusion that comes with it, coming to terms with another body, and coming to terms with how the other students relate to him/her. The school has only recently gone co-ed, and the genders remain segregated. Natsuru would think that escaping the expected male attention by heading to the girls’ half of the school would be a good idea, but remember that this is an anime harem comedy, where girls tend to greet each other by groping boobs, and going on from there. The girls in this school are particularly perverted, so nowhere is safe for Natsuru. 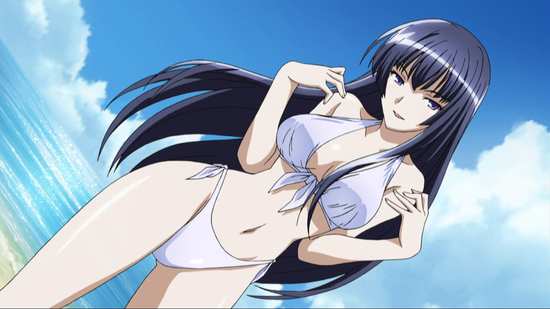 Kämpfer are supposed to fight to the death, so every time that he meets another Kämpfer, the encounter is fraught with the potential for lethal violence. His first encounter with Akane is in a hail of bullets, before they learn that they have the same colour bracelet and are on the same team. The student body president looks like an ominous warrior for the other side, until it becomes clear that she gets off on tormenting and teasing Natsuru. Natsuru’s childhood friend Mikoto returns, becomes a Kämpfer, and attacks female Natsuru for cheating on male Natsuru (it’s a thing), before the penny drops. The point being that all of these potential foes fall in love with Natsuru the guy, and so his harem grows. And unlike most other anime comedy harems, these three girls look as if they’d be happy sharing him. Every guy’s dream, right? Except that Natsuru is in love with Kaede Sakura, and can only see her. Unfortunately that love remains unrequited until Natsuru changes into a girl, and it becomes clear that Sakura is in love with female Natsuru, while thinking male Natsuru is a dork. So there is plenty of room for saucy comedy here. 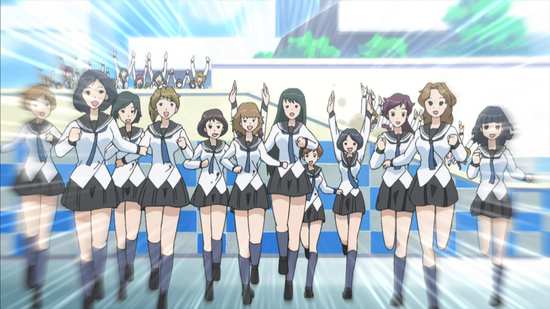 On top of that, we have the Bowel Familiar dolls, stuffed toys that look like animal corpses come to life, with their intestines hanging out of their stomachs, toys that most people would shun away from, but it turns out that Sakura is a fan. Although on occasion, and from the odd angle, the intestines look less like intestines and more like genitals... They’re the goofy comic relief characters that also provide exposition for the show, as more and more about the Kämpfer battles is revealed. It turns out that there is a conspiracy behind all this, somewhat dark and ominous for the girls, and there is a familiar face scheming away, someone who’s getting impatient that the girls that should be fighting to the death, are batting eyelids at Natsuru instead. If there is one cliché that this show could have done without, it’s the tired one equating sexuality with villainy. 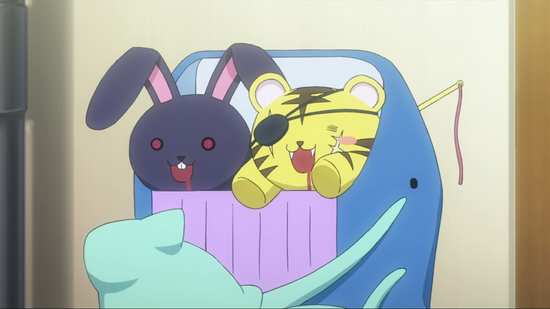 Kämpfer is worse the second time around, and I still don’t get why I can’t click with the show. Certainly it’s funny, the characters are likeable, and the story is interesting. It’s just that the humour seems somehow forced, constrained, and predictable. It’s an entertaining show that is above average, but not by much. And then I watched the OVAs, and it’s here the show really comes into its own. The fact of the matter is that the premise for the show really does raise expectations of sauciness and ribald humour that the broadcast standard series can’t deliver on, can only allude to through innuendo and asides. But for the two episodes of the OVAs, the gloves, or rather the panties come off, and things get a lot more frisky and steamy (without ever getting explicit). I enjoyed the OVA episodes much more than the series simply because they were more risqué, concentrated on the sauciness, and forgot the storyline, which isn’t really what makes the show fun in the first place. Kämpfer might have been more fun if it had gone for the full ecchi from the beginning. I double-dipped to get a better transfer on Blu-ray than that on the DVDs, and in this respect the release delivers. But I’m beginning to regret that now as this is one of those shows that get worse the second time around, not better.